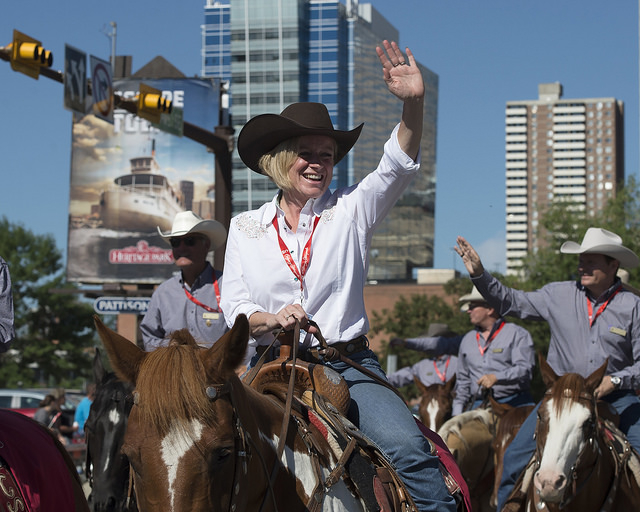 Will Canada’s premiers do the right thing?

At their conference in St. John’s, Newfoundland this week, provincial leaders are set to release a new energy strategy for the country. So far it looks as if theare favouring fossil fuel development, pipeline construction and oil sands expansion over climate change reduction.

To do so is the equivalent of fiddling while Rome burns: a short-term money grab while ignoring the debilitating impact climate change has on our environment and human health.

Lobbying over the latest draft of the strategy began in earnest yesterday when Saskatchewan Premier Brad Wall told the Canadian Press that he’s concerned the oil and gas industry is increasingly being viewed as a liability in the country.

Wall said development needs to be more sustainable, “but increasingly the dialogue in the country seems to be heading in the direction where somehow oil and gas is something we should be ashamed of.”

Wall’s comments come at a time when a severe drought stretches across Saskatchewan and wildfires burning out of control caused the largest evacuation in the province’s history.

It’s not certain climate change is responsible for the drought, of which the wildfires are a symptom. What is known is that global warming has exacerbated the problem. Over 570 wildfires scorched Saskatchewan this year, by early July — well over double the 205 fires that took place in the same time last year. These fires forced 13,000 people to evacuate from their homes.

Despite that, Wall would sacrifice the well-being of his province’s citizens for oil.

Nor are the premiers taking into account what kind of message an energy strategy built around tar sands and oil pipelines would send to the world in advance of the international climate change talks coming up in Paris.

Thanks to the federal government’s heel-dragging on climate targets, Canada is already seen as a poor global citizen in the rest of the world’s eyes. Affirming oil sands expansion would in no way help our country’s reputation.

Despite all this, the provinces are lining up to line their pockets with grubby money from the fossil fuel industry.

It’s unlikely Alberta Premier Rachel Notley will emerge as a strong champion for clean technology. The NDP premier seems to be mastering the political art of talking out of both sides of her mouth.

On the one hand, she convened an expert panel to review the province’s climate change policy, and says Alberta will review and update its current regulations governing carbon emissions.

Then she promptly turned around and, in a speech to the Calgary Petroleum Club, extolled the virtues of the Alberta tar sands.

Part of the problem is the premiers want it both ways. They want the easy money from fossil fuels, while willfully ignoring that if they extract the heavy crude from the tar sands and ship it out via pipelines, they will never be able to meet the carbon emission targets to which they pay lip service.

Time and time again, climate change experts have said that in order for the planet not to see its temperature raise by two degrees large fossil fuel deposits – including the Alberta tar sands – must remain in the ground.

What is it about that statement that the premiers don’t understand? There is no way around this except to pass the risks down to the next generation, knowing that by some point, it will be too late.

One possible champion may emerge from the meetings. Ontario Premier Kathleen Wynne has committed the province to joining Quebec’s cap and trade program, to closing coal plants, and to electrifying the province’s commuter rail network, among other green initiatives.

Most recently, Ontario was one of the signatories to the first-ever Pan American action statement on climate change. The province joins 22 other states and regions committed to support carbon pricing, and meet existing greenhouse gas reduction agreements, among other things.

Wynne has good reason to pursue such a program. As the National Observer reported in early July, the province is feeling the impact of climate change. A shifting polar vortex has resulted in unusually wet and cold winters, while severe storms have damaged crops, raising food security issues.

Even if Wynne does fight for an energy strategy that favours green tech over fossil fuels, it’s unlikely her single vote will be enough to sway the outcome. B.C. wants to be able to transport liquefied natural gas; while the oil-extracting provinces of Alberta and Saskatchewan, as well as the oil-refining province of New Brunswick, will be looking for support for pipelines.

It’s a far cry from the environmentally-friendly future the premiers envisioned in the draft energy strategy in 2014.

When the premiers step out of the meeting room with the new energy strategy, they can either commit the country to a dirty future built on the oil sands and almost certain civil disobedience over new pipeline construction, or they can direct Canada toward a new, robust industry created from clean technology and renewables.

Should they choose the latter course, the premiers will emerge — not as climate criminals — but as true leaders and 21st century visionaries.