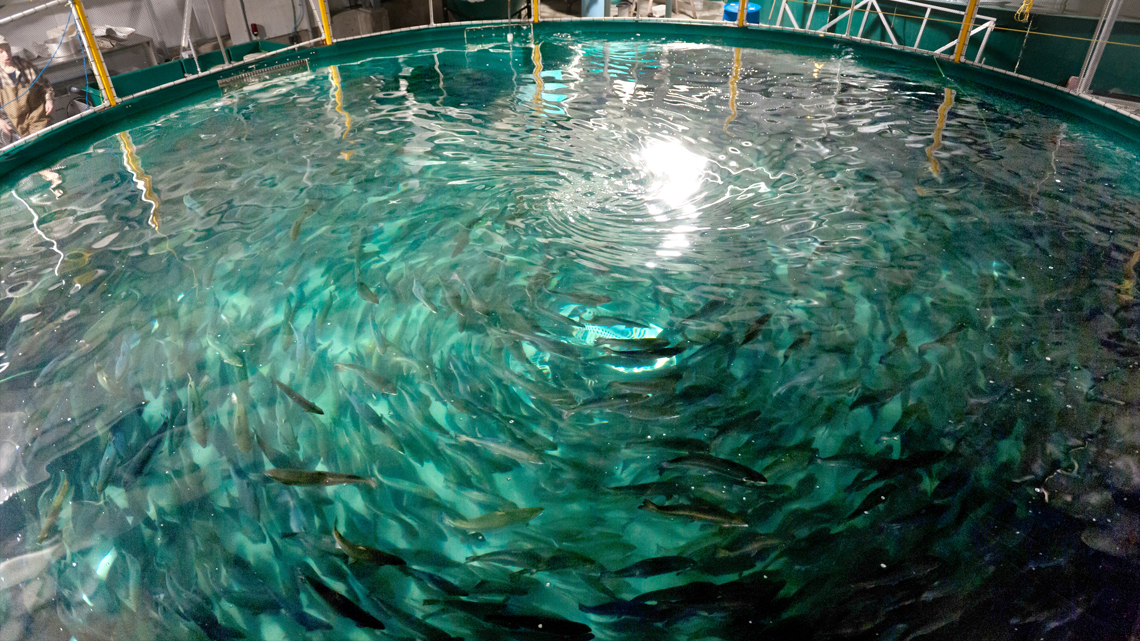 The recent offer by Norwegian salmon-farming corporation Grieg to pay off B.C. shrimp fishermen—as part of an industry-wide intention to massively expand salmon aquaculture production in B.C. in the next five years— is only the latest imbroglio in the long and bitter controversy over net-pen salmon farming.

The debate has raged for over 25 years in British Columbia. Along the way it has embroiled conservationists, fishermen, scientists, federal and provincial governments and the aquaculture industry itself— sparking multiple lawsuits and protest marches in Vancouver, Victoria and coastal communities.

But there’s a new X factor at play in the long-running controversy.

The ’Namgis First Nation, with advice and support from a large number of groups, including Tides Canada, conservation groups, and funding agencies, has launched Kuterra, a land-based, “closed-containment” aquaculture project that keeps their Atlantic salmon out of contact with the larger marine ecosystem.

The company launched in the summer of 2014. Initially sold only in Safeway Sobey’s stores in BC and Alberta, their fish are now available as far east as Manitoba.

“Individual 'Namgis members and the Nation as a whole have long been concerned about the effects of open net-pen aquaculture on the marine environment and the life in and around it, especially wild salmon,” says ‘Namgis Chief Debra Hanuse.

“Our primary motive for pursuing land-based closed containment aquaculture and founding Kuterra is environmental. We feel the most effective way to act on those concerns is to propose an alternative that we see as being more sustainable.”

“Aquaculture is not going to go away”

Net-pen salmon farms are ocean-based enclosures containing hundreds of thousands of fish (usually a type of Atlantic salmon). The floating pens can excrete as much waste as a town of 7500 people.

The farms appear like a massive buffet to seals and sea-lions, who have often ended up dead for their interest— by drowning in nets, or by “nuisance kills” in which overly curious marine mammals are shot with rifles by salmon farm staff.

But what most concerns conservation groups who have fought to regulate the net-pen salmon farm industry—including the David Suzuki Foundation, Watershed Watch, Living Oceans, and Fraser Riverkeeper— are farm-borne sea lice and diseases, which can infect wild salmon stocks.

Disease and lice impacts put the net-pen industry at the centre of the $26.4 million Cohen Commission inquiry into the decline of Fraser River sockeye that closed in 2012. One Commission researcher stated in his technical report that every year salmon farmers reported an average of 30 high-risk “fish health events” that could endanger wild salmon.

Justice Cohen noted at the close of the commission that the potential harm to Fraser sockeye by farm-borne diseases is "serious or irreversible," and that net-pen farms along sockeye migration routes have the potential to "introduce exotic diseases and to exacerbate endemic diseases."

Despite these impacts and risks, members of the BC Salmon Farmers Association (BCSFA) have plans to increase their primarily net-pen salmon farm production over 40 per cent by 2020.

But not all salmon farm operations are created equal, and the ‘Namgis have taken Justice Cohen’s conclusions to heart by putting their operations on land.

“All evidence is that aquaculture is not going to go away,” says Hanuse, “and in fact is growing very rapidly globally. The question then becomes how to practice aquaculture sustainably.

"We believe that land-based closed containment aquaculture is the next evolution and will become the method of choice for new operations in the future. We see the mission of Kuterra as catalyzing a change in the industry.”

A new economic and ecological model?

Eric Hobson has been involved with salmon conservation issues since 2006, and is formerly the president of SOS Marine Conservation Foundation, a group that sought to change the net-pen industry to protect wild salmon. Hobson and SOS had been working with the ‘Namgis on their concerns about net-pen salmon farms, and in 2009 he approached the ‘Namgis about piloting a land-based closed containment Atlantic salmon aquaculture system.

“At SOS, we had a three-pronged strategy for protecting wild salmon and affecting related salmon farming issues,” says Hobson. “One was short-term, investing in science and research to get the operating practices of the industry to evolve.”

The second “medium-term” goal, notes Hobson, was to work with provincial authorities and Fisheries and Oceans Canada (the DFO) on farm-siting criteria that would keep the farms away from migrating wild stocks, and on other regulations.

The third, long-term goal “was to try to build a pilot project to assess the technical, biological and economic viability of growing Atlantic salmon on land rather than in the oceans, removing all interaction between the farm and marine environment.”

Now that the project is in full swing, the SOS foundation has merged its operations with local conservation research organization Watershed Watch, and Hobson is now the Chair of the Kuterra board.

“We’ve had great support from Sustainable Development Technology Canada, Tides Canada and many others, but the ‘Namgis are the ones that have really stepped up, contributing land, capital and hard work to make this happen,” says Hobson.

“It’s not easy being on the leading edge of something innovative. They want to see it happen for obvious reasons – local economic development and to employ their people, but the fundamental reason is they want wild salmon to survive. That’s the basis of their culture."

Part of the measure of the project’s success will be if the net-pen salmon farm industry actually does emulate Kuterra’s land-based technology.

Currently three Norwegian multinational corporations—Marine Harvest, Mainstream and Grieg Seafoods— own 90 per cent of net-pen salmon farms in BC. When asked if he thinks the project is having the hoped-for impact on the thinking and practices of these companies, Hobson notes that it is yet early days for proving profitability.

“But back at head offices in Norway they’re now looking seriously at land-based closed-containment facilities, with the Norwegian government and industry actively investing in the kind of research we’ve been doing in BC, and I think there are some projects on the drawing boards.”

When asked for an opinion on the Kuterra project and if any members are considering moving to closed-containment, Sabrina Santoro, a communications manager for the BCSFA stated in an email that the organization's membership includes "land-based fresh-water facilities" as well as ocean and lake-based net-pens.

Santoro noted however that while "the province can be home to a diversified salmon aquaculture sector,” the BCSFA believes that net-pen salmon farming in the ocean remains "the most efficient and effective manner of growing salmon."

The BCSFA representative did not respond directly to the question of whether any of their members have taken a cue from Kuterra,but did attach a letter that was extremely critical of closed-containment or "recirculating aquaculture systems" (RAS) salmon farms.

One of the articles that apparently upset Madsen was a feature article in Fish Farming International on Kuterra (and another Canadian land-based salmon aquaculture business, AgriMarine)— titled “What if land-based salmon works?”

In his letter Madsen rips into RAS proponents and predicts failure for any land-based salmon aquaculture system, citing overhead costs. He believes RAS could work for “expensive species that carry the costs” like eel and pike perch but that it is unsuited for salmon aquaculture.

Madsen also included the following broadside about the proponents of RAS projects:

"We have to be aware, though, that we are up against powerful and very wealthy players, particularly US NGOs who hate salmon culture and would like it stopped, so salmon again can become a luxury item for rich sports fishermen.

"As these players has [sic] not been successful in directly stopping salmon culture, which has been a tremendous success among consumers, they try to [do] the next best thing, which is calling for salmon to be produced in a manner which is obviously not economically feasible. In this venture, they are involving 'useful idiots' in green NGOs all over the world."

International interest in an ongoing experiment

Hobson, for his part, appears unruffled by such criticisms.

Calling Madsen’s letter “very dated,” he notes that it's the job of the BCSFA to "promote their members’ views on the benefits of the open net-pen aquaculture industry, and not the costs to the marine environment.”

Hobson pointed to a more recent industry article featuring aquaculture consultant Kjell Bjordal, who comments that rising costs in the Norwegian net-pen salmon-farming industry “are prompting an ‘open invitation’ to new technologies,” and that on-land RAS systems “are the only technology that can be a ‘serious threat’ to traditional salmon farming.”

Vitriolic attacks like Madsen's, according to Hobson, are not typical.

“We have a good relationship with the major salmon farmers,” says Hobson. “They supply Kuterra with smolts and expertise is shared at an operations level. They’ve been very good to work with.”

As for long-term viability, Kuterra has now been growing salmon for two years and selling them for one year, says Chief Hanuse, and indeed the economic feasibility of the project has yet to prove out.

“We expect the answer to that next year,” she says. “We consider it a success so far that so many people are waiting for that.”

Kuterra has had conversations with government representatives, regulators and “potential investors from BC, across Canada and globally,” says Hanuse. The ‘Namgis and representatives of Kuterra have also fielded interest from “new and potential producers,” including other First Nations groups, as well as potential buyers from many other countries.

If it can turn a profit, the chance for Kuterra to be a global influence looks promising.

“We’ve had invitations to talk to researchers, aquaculture students and environmental groups in Norway, Sweden, US and elsewhere in Canada,” she says. “No matter what path Kuterra takes in the future, this heightened awareness and the increased land-based closed containment development in BC and elsewhere is an achievement.”