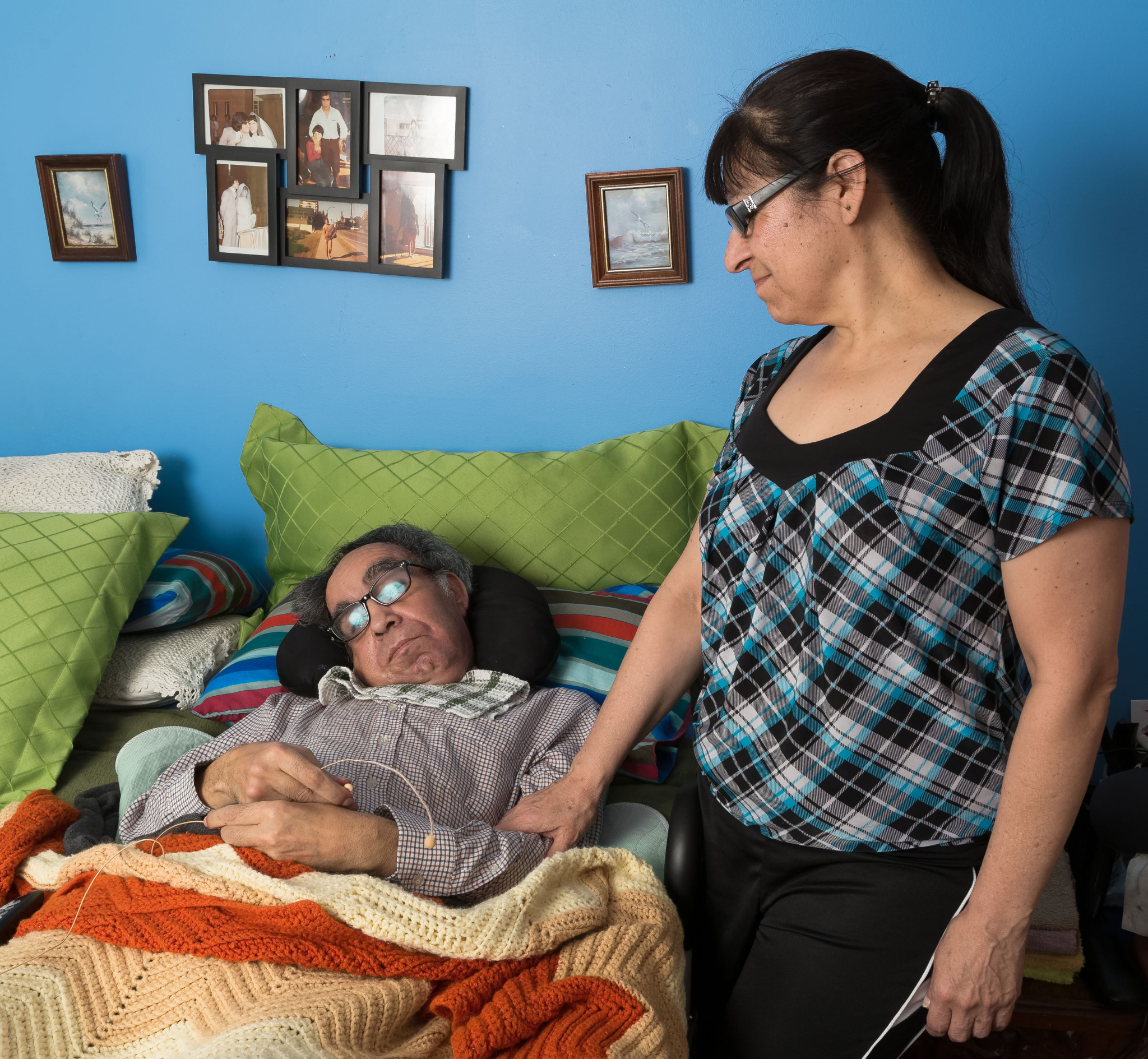 When Calgarian Dave Bonk began his non-profit agency, Hearts and Hammers, he had no idea what he was getting into. He envisioned a charity that would renovate homes for the disabled at no cost to them while making it easier for them to live their everyday lives.

It wasn’t that simple. The first renovation Hearts and Hammers did was to Peter and Debbie Howard’s home in 2013. Peter had multiple sclerosis. Debbie was in and out of hospitals for nine years because of a terrible car accident.

One morning at 7:30 a.m., Peter called. He had fallen in his house and couldn’t get up. Bonk went over and lent a hand. It wouldn’t be the last time Bonk, or a member of his team, would drive over and give Peter assistance, sometimes with something as basic as getting his socks on in the morning.

“Yeah, you absolutely do get up close and personal, and I’ve learned a lot about mobility challenges and just the day-to-day struggles that happen,” Bonk says.

Since starting Hearts and Hammers, Bonk has carried out renovations on two homes. In the process, he’s weathered a revolt from his non-profit’s board, learned about fund-raising and volunteer management, gained accolades for his selfless work, and also found out more than a little about himself.

Bonk, 36, is a real estate investor who buys and manages properties and often renovates ones he’s purchased as well. One day during the last economic downturn in 2009, Bonk walked into a house he was planning to purchase in Calgary’s Dover area in the southeast.

Dover isn’t the sort of neighborhood people typically picture when they think of Calgary. Far removed from the gleaming oil towers of downtown, the area is working class with a lot of apartments and rentals.

When Bonk entered the house, its squalid condition shocked him. It looked like it had been empty for a long time. Kitchen cabinet doors were torn off and everything was filthy. Bonk says it was unimaginable living conditions for a city as affluent as Calgary. For the first time in his life, he asked himself, “Why is this happening?”

Looking at the run-down property, Bonk had an epiphany. He realized that the deteriorating condition of the house directly impacted what its residents could achieve in life. “I think people deserve to be in a safe, sound, inspiring environment, so they can go and live their contribution in their life,” Bonk says. “And when your house has leaking pipes and roofs, it’s pretty hard to do that.”

When Bonk decided to begin Hearts and Hammers. In 2013, he sent out a media release asking Calgarians to nominate their friends, family or neighbors who needed a home renovation. Predictably, a lot of responses came back, but not all of them met with Bonk’s approval.

Sorting through, he rejected a lot of the applicants. “There are all kinds of reasons why people feel they deserve renovation: financial or undealt-with addiction, but the ones that were mobility related, that’s something I could get behind – and it seems like Calgarians can too.”

Bonk’s family doesn’t have anyone who’s disabled, and Bonk himself says he doesn’t have a personal story about mobility. Rather, with the amount of work it took to launch Hearts and Hammers and which Bonk still pours into the agency, he says he needs to personally believe in the work he’s doing.

Bonk discovered people in Calgary who were forced to separate because one had a mobility challenge, their house was inaccessible and they couldn’t afford the renovations. “They’re truly vulnerable people. This is something that’s no fault of their own, that they’re in this situation.”

That last line actually encapsulates Bonk’s childhood. Born in Swift Current, Saskatchewan, Bonk grew up in Regina in one of the biggest houses on his road in their middle-class neighborhood. That would change in Grade 8.

That year, the Bonk family moved to Calgary. Bonk’s father decided to get into the pre-finished hardwood flooring business, which in 1991 was just beginning. It looked like a smart move. He was part owner in a British Columbia-based timber mill and an excellent salesman. He landed contracts with all the big building contractors.

It should have been a happy story, but it wasn’t. The product had issues and Bonk’s father ended up losing everything. Family life became difficult and stressful, Bonk recollects. The Bonks moved to a $800 a month rental in a half-duplex in a marginal neighborhood.

Whether consciously or not, real estate became an important part of Bonk’s life. He experienced both nice and not-so-nice homes as a child; made houses his profession; and then ultimately turned them into his passion.

Living in an inspiring environment is very important

Bonk says helping people through renovating their homes is an easy solution. “That one can just be fixed with some money, helping someone to get and down their stairs, or in and out of their house, to shower with dignity.

“That’s a block that when removed, that person can start to focus on who they are and what’s their contribution to the community or the country. Living in an inspiring environment or a house that you’re comfortable in I think is very important. Then you can start to look at those other things that can make a difference for other people.”

Certainly, Bonk makes it sound easy. In reality, putting Hearts and Hammers together took a lot of hard work and sometimes some plain muddling around. Bonk had the passion, but he didn’t necessarily have the knowledge.

Bonk told himself he’d do one renovation a year and began talking to his contractors, such as his painter, plumber, lawyer and others. A number of people said they’d help and it looked as if the fledgling organization was on its way.

But six months in, Hearts and Hammer’s first board of directors walked off en masse. Bonk says they told him he didn’t know what he was doing and the entire project was too “wishy-washy.”

Bonk had never chaired a board before, let alone sat on one. After the board resigned, he sat there, thinking; “I tried. I gave it a good shot.” But with encouragement from his father, Bonk put together a new team that is pretty much the one working together today.

The fact is, running Hearts and Hammers hasn’t been easy. Bonk doesn’t complain, but he notes in a matter-of-fact way building a group from scratch, finding the money for a $70,000 renovation, recruiting painters, plumbers and other contractors takes a bit of work. “Do that in your spare time and get other people to help do it, it takes a lot.”

As is often the case, nothing about the renovations turned out to be straight-forward. Building a wheelchair ramp for one of the projects, the crew discovered they couldn’t just run it straight up to the house. A code governs the steepness of such ramps and Hearts and Hammers had built theirs just over the allowable pitch for that city code. They had to dismatle it and start over again.

The finished ramp ended up zig-zagging across the front yard. Bonk said a lot of labour was involved to excavate the front yard to accommodate this massive ramp. “It’s an amazing ramp,” he laughs.

Nor is the manual labour the only thing to contend with as Bonk found out. In order to apply for government funding to assist with the renovations, the group has helped people do their taxes, for instance.

Fortunately the hard work comes with its own reward – and that’s improving the lives of individuals who otherwise might not stand a chance. A case in point is the Ramirez family.

In 2009, Ramon Ramirez fell ill, suddenly experiencing weakness one side. At first doctors believed the Calgarian had suffered a stroke. Then they ruled that out and a year of testing began for such diseases as ALS and Parkinson’s.

By 2010, Ramon could no longer speak and couldn’t get around on his own. Doctors had diagnosed him with a disease so rare that it doesn’t even have a name and is one which only eight other people in Canada have. In the meantime, Ramon’s lack of mobility had turned into a major challenge for his wife, Noemi.

"They made my life a lot easier."

The couple lives in Pineridge in Calgary’s northeast, in a split level home that wasn’t designed to accommodate a disabled individual. Moving Ramon, now confined to a wheelchair, became difficult for Noemi.

To take Ramon upstairs in their home, the 55-year-old, five-foot-four-inch tall nurse had to wrap a rope under his arms and then physically haul him up the stairs. Getting him outside was next to impossible: the house lacked a ramp and had a step. If she needed to get him to the car, Noemi would hoist Ramon onto her back and carry him.

For nearly five years, Noemi – with the help of a part-time caregiver – managed to look after her husband in these trying circumstances without complaint.

All that changed in 2014 when Hearts and Hammers renovated the Ramirez’s house. Over a period of eight months, they replaced the main stairwell with a wheelchair lift, upgraded the bathroom with new fixtures and an accessible shower stall, added a large ramp to the front of the house, and much more. They also had to remove and rebuild the wall between the kitchen and the living room to provide support for the lift and reroute the electrical wiring to provide power for the list and its controls.

Now Noemi is able to take her husband out of the house every day with very little effort. “I cannot thank them enough, even if I said thank you a million times, because they made my life a lot easier,” Noemi says.

“To be a handicapped person at home is really hard, and they made it easy for us.”

One of the next renovations Hearts and Hammers is preparing to carry out is for a nurse who broke her back while lifting a patient out of the bed.

The other thing Bonk wants to do is support others to open Heart and Hammers chapters in their own cities across Canada. Bonk says he would personally mentor others and has a proven model that works now.

“With the aging population, we need solutions to keep people in their homes as long as possible, because the system is not set up for the aging population and it’s extremely expensive when we have to put our parents somewhere. It’s almost going to be impossible, so this is one of the things that can help.”