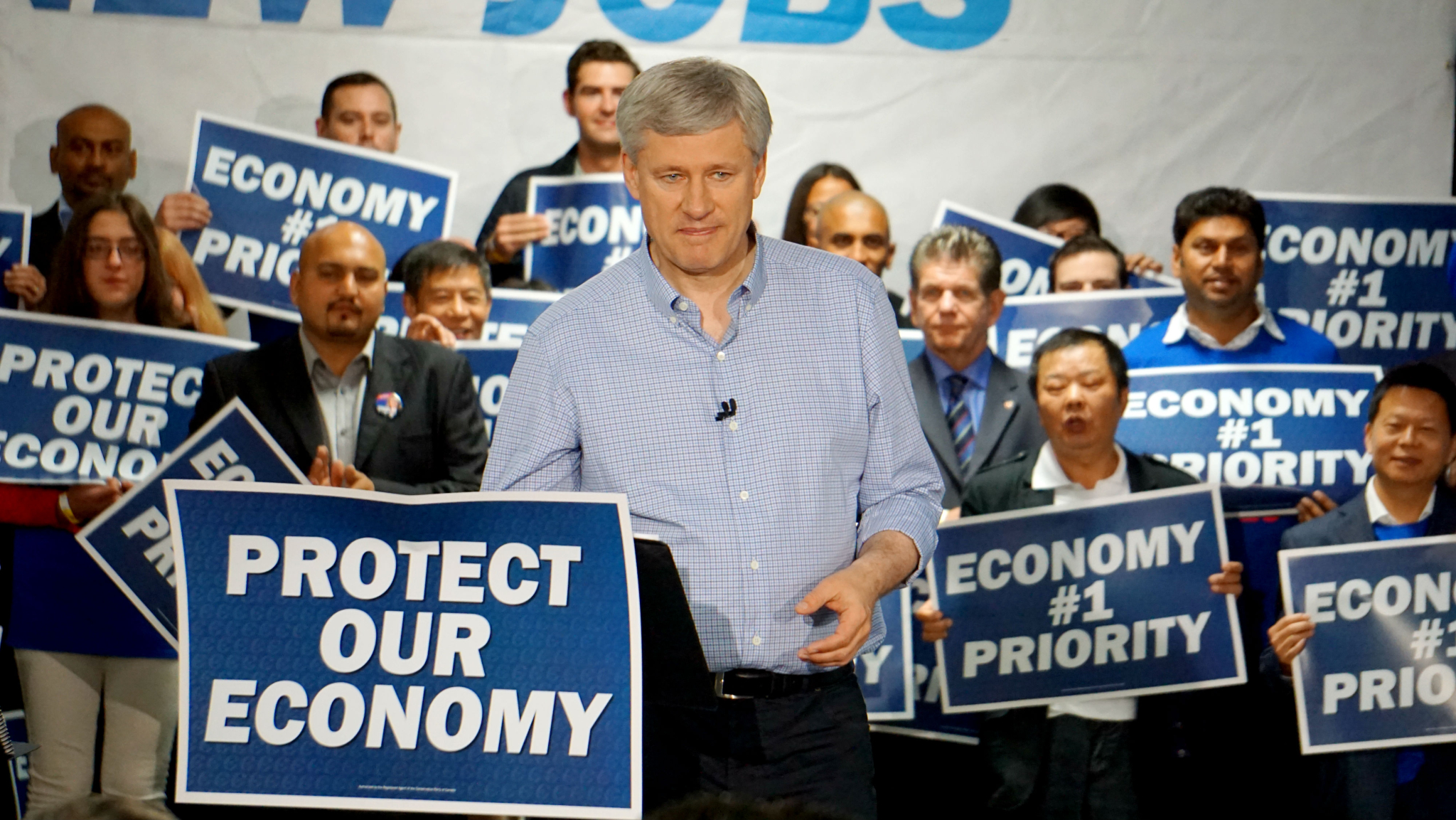 Prime Minister Stephen Harper at a rally in Vancouver, B.C. in October 2015. Photo by Elizabeth McSheffrey.
Previous story
Next story

Postmedia, a company now largely owned primarily by U.S. hedge funds, has championed Stephen Harper as a "clear choice" in the 2015 federal election.

The Ottawa Citizen became the latest of the network's publications to endorse the Conservatives in a Friday editorial, joining the Edmonton Journal, the Toronto Sun, The Province, the Globe and Mail, the Saskatoon StarPhoenix, and at least five other publications.

The endorsement wasn't by the editorial staff, however, as Edmonton Journal writer Paula Simons said in a tweet:

And yes. Before you ask, this was a decision made by the owners of the paper. As is their traditional prerogative.

The endorsement touts Stephen Harper as the best choice to deal with an "increasingly unstable situation in the Middle East," and of course, the ongoing "economic uncertainty" Canada has faced in the wake recent recession.

It's no secret that the Conservative prime minister has prioritized oil and gas development as part Canada's economic future — his government has approved the controversial Enbridge Northern Gateway pipeline, and his party supports the proposed TransCanada Energy East and Keystone XL pipelines project.

Postmedia's endorsement should come as no surprise then, given the network's relationship with the Canadian Association of Petroleum Producers (CAPP), Canada's largest official advocate for the oil and gas industry.

According to the Postmedia Prezi slides, newspapers would work in partnership with CAPP to put the spotlight on Canada's oil industry:

"While Albertans may be acutely aware of this fact, the rest of the country often fails to grasp the fundamental role the energy sector plays in building and sustaining economic prosperity. Postmedia and CAPP will bring energy to the forefront of our national conversation."

The presentation came via Twitter on the same day that Postmedia downsized its parliamentary bureau in Ottawa and laid off prominent environmental journalist Mike De Souza and political reporters Andrea Hill and Tobi Cohen.

With images of pipelines in the background, the slides explained how to link Postmedia's sponsored energy content with CAPP's "thought leadership" and stimulate conversations on social media.

The ad proposal suggested "topics to be directed by CAPP and written by Postmedia," with 12 single page "Joint Ventures" in the National Post, as well as 12 major newspapers including the Vancouver Sun, Calgary Herald and The Times Colonist.

No influence, but an "obligation to inform" about energy

At the time, CAPP spokesperson Geraldine Anderson told Vancouver Observer that the association does not influence the editorial content of Postmedia papers, but "believes industry has an obligation to inform Canadians about energy issues."

When asked how much a partnership of this kind would cost, CAPP would not disclose the amount but said it was 100 per cent paid for by members.

New York-based hedge fund GoldenTree Asset Management currently has a 35 per cent hold over the company, and Conneticut's Silver Point Capital had a 19 per cent stake as of last year.

"Hedge funds — aptly referred to as vulture funds — specialize, not in building companies, but in profiting from their distress through corporate bankruptcies, restructurings and financial liquidations," Gutstein wrote for rabble.ca.

"They get rich by lending money to companies 'at or near the end of their present financial ropes.'"

Postmedia, currently encumbered with nearly $500 million of debt, may pose such an opportunity after a recent quarterly net loss of $140.8 million.

Writer David Olive even hinted that meeting these payment demands "impairs Postmedia in its ability to serve Canadians."