GOVERNMENT OF ONE: Stephen Harper IS the Conservative Party 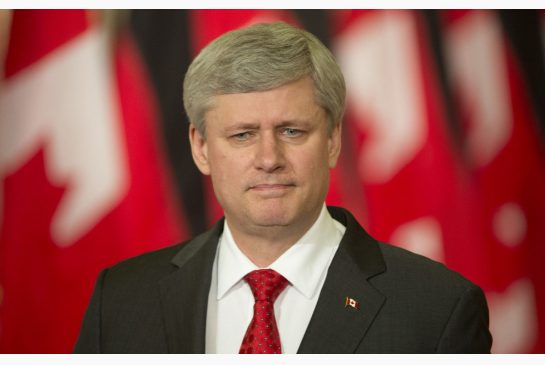 I'm reminded of the scene in When Harry Met Sally. Meg Ryan, sitting in a restaurant, fakes an orgasm. She does it so convincingly that a bemused female patron nearby says sotto voce to her waiter: “I want what she’s having."

The Globe and Mail, which claims to be Canada’s newspaper of record, has just attempted to carry off a similar feat, but with much less success.

The Globe, which has been saddled with nicknames like “The Grope and Flail” and “The Old and Male,” has faked an impartial editorial dissertation that is shamelessly in favour of the Conservative Party of Canada.

But that's not all. Globe and Mail editorial staff, led by Editor-in-Chief David Walmsley, and doubtless operating under the gimlet gaze of publisher Philip Crawley, have offered readers a bizarre and utterly meaningless thesis for their stance.

In essence, they say that there is nothing wrong with the Conservative Party of Canada that can’t be solved by having Stephen Harper go away.

Sure. The Huns without Attila. Jaws without the Great White Shark.

Then, in a further irrational flight of fancy, they offer helpful advice to Canada’s Prime Minister, saying that, to solve the problem, “… after October 19, he should quickly resign.”

If The Globe’s advertorial was promoting the sale of a widget, or touting a new but still controversial treatment for cancer, such vested interest propaganda would die a quick and natural death.

But the subject of the commentary is the highly charged federal election. This heroically long federal election campaign is no ordinary campaign, and Stephen Harper – whose "absolutely crippling weakness", according to biographer John Ibbitson, is that "he cannot take orders from anybody" – is no ordinary prime minister.

The idea that the Conservative Party can go on independently after Stephen Harper has spent nearly a decade aggressively shaping it in every way into an instrument of his will, is absurd. The very idea that asking him politely to step down will have some sort of impact is also clearly nonsense.

The idea that Stephen Harper would resign while there is still a single breath left in the decimated ranks of the Conservative Party is like saying that a drowning man will cheerfully paddle away from a life raft.

Stephen Harper has spent nine years diligently and incrementally reshaping not only the Conservative Party of Canada, but the government of Canada, turning both into efficient expressions of his dark, ideological proclivities.

This has been obvious ever since – shortly after he was elected – Stephen Harper began his long battle against all forms of public informal contact in this country, retreating behind public relations announcements, carefully structured and controlled meetings with selected members of the press, and a hiring campaign of public relations spokespeople that continues to this day.

Since several years ago an edict went out to government departments saying that the Government of Canada would now be known as the “Harper Government."

Since open dialogue with expert government staff, particularly knowledgeable scientists – and even government librarians – suddenly became an endangered and eventually an extinct practice.

Since, with militaristic precision, Conservative MPs in the pre-election run-up recorded identical speeches delivered in monotone, zombie-like fashion and then fanned out like locusts across the country, delivering self-serving Conservative bribes to neighbourhoods and communities that eventually, over several weeks, totalled over $1 billion.

It represents money – its accumulation, its management, and its distribution, and the interests of those who move money around.

As if the only thing that existed in the world was cash, moving back and forward from one person to another and, theoretically, making the world go round. It laments the fact that “the key issue in the election should have been the economy and the financial health of Canadians.”

Interactions between people do not just consist of financial transactions, but include warmth, affection, mutual support, hard work without an overwhelming focus on material recompense, and an expression of the values that condition such interactions – things like honesty, respect and caring.

The human economy does not exist in isolation, but is derived from the ecosystem around it, which supplies it with not just inert substances like oil, metals and methane, but living things like plants, animals and the creatures in the ocean.

The biggest resource in any nation is not its bankroll, but the commitment of its citizens to uphold the principles of sharing, compassion, consideration of one another’s dignity, intelligent and thoughtful discourse and meaningful and respectful cooperation.

I’m told that the editors of The Globe and Mail received several thousand comments on their excursion into unvarnished surrealism. Almost all of them were negative.

They should have known.

It’s time for the 0.1 per cent to start listening a little more carefully to the 99.9 per cent.

It is time for the political pundits to be realistic and holistic, not narrow and floridly aspirational.

It really is time for a change. A very big change.