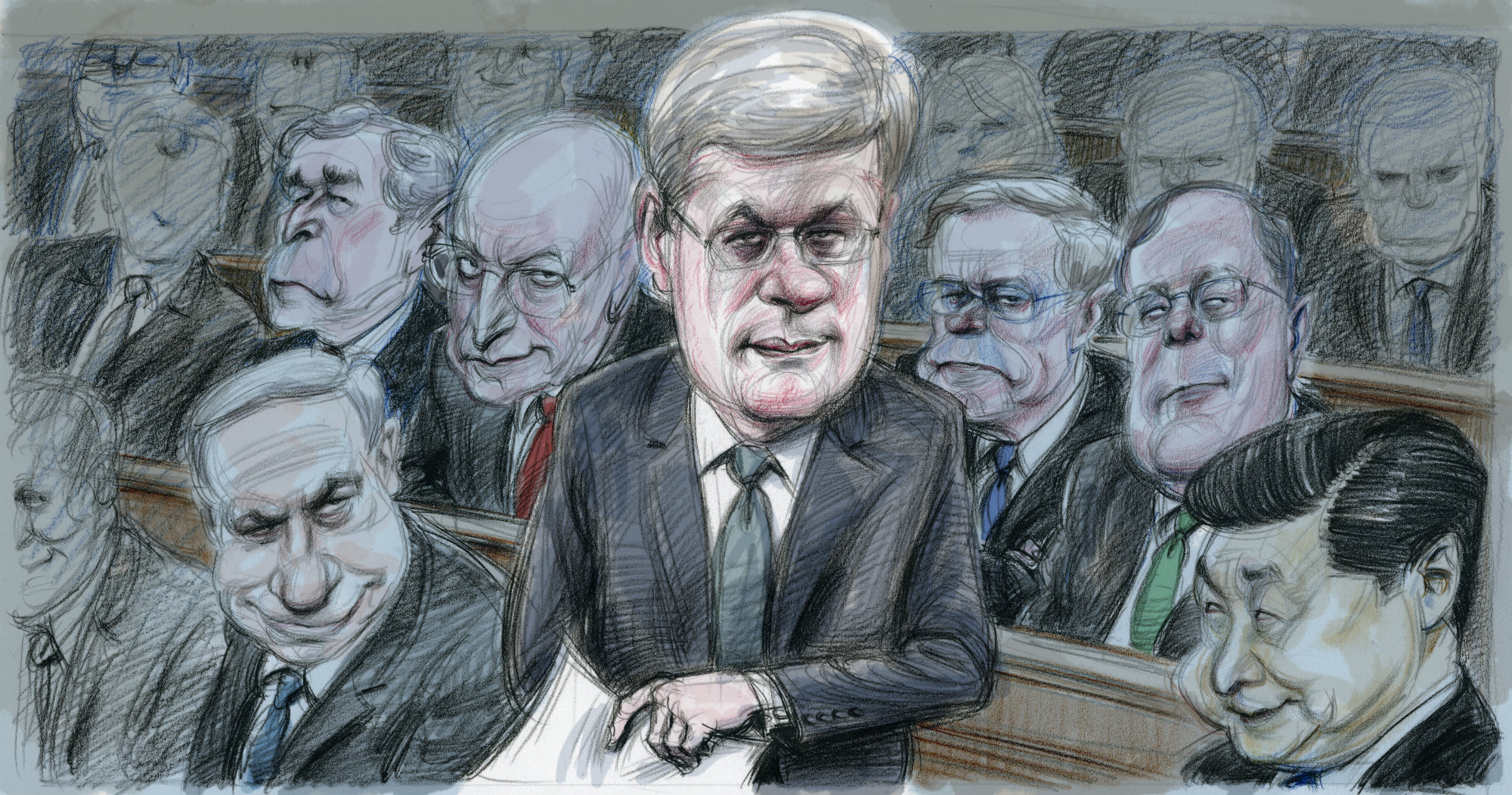 As we approach the election on Monday October 19, something has just dawned on me.

The prime minister of Canada is basically a Republican American. He may as well be President Stephen Harper (R).

Stephen Harper’s mindset and policies are a peculiarly un-Canadian cross-border mix of ideas from the Tea Party, the Koch brothers, U.S. evangelicalism and Christian Zionism.

The Tea Party takes over

The American Tea Party is a hotbed of ideological zealotry that has now become the core of the Republican Party south of the border.

The Tea Party plans to make the government of the United States smaller and smaller. It wants to lower taxes, especially to corporations, curtail social services (their particular target is inexpensive healthcare through the Affordable Care Act – also known as “Obamacare") and privatize as many services as possible.

It wants to make the economy the one and only issue in the political equation – with a special emphasis on avoiding or reducing the government deficit. It wants to make access to guns even more widespread.

Oh, and the Tea/Republican Party airily waves off global warming as a distracting fiction.

The Tea Party rejects the United Nations and especially the environmental agenda generated at the United Nations Earth Summit in Rio de Janeiro in 1992. It happily takes money from a uniquely American institution known as the “SuperPAC”, a kind of informal committee that is nominally situated outside the political process, but in reality supports political actions with vast infusions of cash, mostly received from colossally rich Americans like the Koch brothers.

The Koch brothers are the Tea Party

It is now known that the elusive and fabulously rich Koch brothers, Charles and David, working with Big Tobacco, formally created the pseudo-grassroots Tea Party back in 2002, when together they paid for the establishment of the first (now defunct) Tea Party website.

It just so happens that the Koch brothers possess more land in the tar sands than any other business interest. Their financial investment in the fossil fuel industry around the world is massive.

Their wealth helps fund right-wing think tanks in the United States, as well as the Fraser Institute in Canada, which preach the same small government, low-tax approach favoured by the Tea Party. The siblings, on behalf of the fossil fuel industry, have paid tens of millions of dollars to argue, like the Tea Party, against the reality of global warming, and particularly the role of humankind in causing it.

The Koch brothers have another disconcerting attribute.

Despite having expressed, 30 or 40 years ago, strong support for gay rights and abortion, Charles and David Koch have pragmatically funnelled tens of millions of dollars into evangelical Christian and conservative Catholic groups with diametrically opposed points of view, because the latter tend to support the market-driven economy – a venue where the very rich do very well.

The Koch brothers just happen to have also played an important role in fostering support for the state of Israel, working closely with casino mogul Sheldon Adelson as well as lobby groups. Together, Adelson and the Kochs and others have lobbied hard for pro-Netanyahu Republican politicians.

The Tea/Republican Party and the Koch brothers identify closely with Christian Zionists and support for Netanyahu's government. Leading Tea Party politicians such as Michele Bachmann, Steve King and Louie Gohmert have travelled several times to Israel and the Middle East, voicing strong Biblically-infused support for the Israeli state and its government, and consequent blanket condemnation of Muslim “terrorists,” including in this essentially all Palestinians, even though over 10 per cent of them are Christians.

Now the Likud Party in Israel, which equates criticism of its platform with anti-Semitism, is reciprocating by reaching back in history to deceased Commie-hating U.S. Senator Joseph McCarthy as it attacks socially progressive organizations, parties and politicians in Israel.

Putting it all together – Stephen Harper and the Tea Party and the Kochs and….

As you read about the Tea Party, Charles and David Koch, and their blind faith in small government, lowered taxes, private sector services, support for fossil fuels, and zealous support of Netanyahu coupled with a rejection of Islam, you may have felt a sense a resonance with the Canadian federal election that approaches déjà vu.

And that’s because it’s there, laid out in the platform of the Conservative Party of Stephen Harper.

All the attributes and behaviours and beliefs espoused by the Republican Party, the ascendant Tea Party that currently shapes its policies, and the shadowy Koch brothers with their limitless fortune, sit very comfortably with Prime Minister Stephen Harper.

Rename the Republican Party the Conservative Party of Canada, and set the Reform Party — aka the Tea Party – at its centre.

Inject a dose of rigid Christian fundamentalism — from the Christian and Missionary Alliance for Harper, and from the Cornwall Alliance for the Stewardship of Creation for his U.S. counterparts.

Add in identical beliefs in lower taxes, smaller government, the primacy of big business, the “traditional” family, free markets, trickle-down economics and the privatization of services like health care, the CBC and the social safety net.

The parallelism is striking. No wonder that almost immediately after he was first elected as a minority prime minister, Stephen Harper called upon Republican strategist Frank Luntz to come north and advise Conservatives on how to win, and win big.

The dark side – negative ads and voter suppression

The only thing missing is mention of negative campaign advertisements.

But the Tea Party, the Koch brothers, and the Republican Party – and the Conservative Party in Canada – share that inclination too. North of the 49th Parallel, we are familiar with the Harper ads about Justin Trudeau’s hair, the notion that “he’s really not ready for the job,” and the talk about all opposition parties being soft on Islamist jihadism.

Among Republicans, the penchant for nasty negative ads has become so all-consuming that they have begun inspiring their wearied opposition to reciprocate. In the current Republican presidential campaign, faute de mieux, attack ads by Republican Party candidates against one other now actually exceed positive ads.

And then there's one final thing.

The US electoral system has embraced digital technology for voting in most state and federal elections. This has opened the door to vote tampering on a massive scale, and the tendency has been inextricably bound up with the Republican Party.

Voter suppression is alive and well in Canada, in different ways (robocalls come to mind), but with the same brazen intent: to block citizens from voting for other parties.

The bottom line in all this is that Stephen Harper is politically more American than Canadian, more Republican and Tea Party than Conservative in the older “progressive Conservative” Canadian spirit, more ideological and belief-driven than pragmatic.

So I say: RIP Canada, as a separate and sovereign nation.

Welcome to our country’s new role as the dang-fangled new 51st state of the American Union.

Unless you and I get out and vote for another option tomorrow.