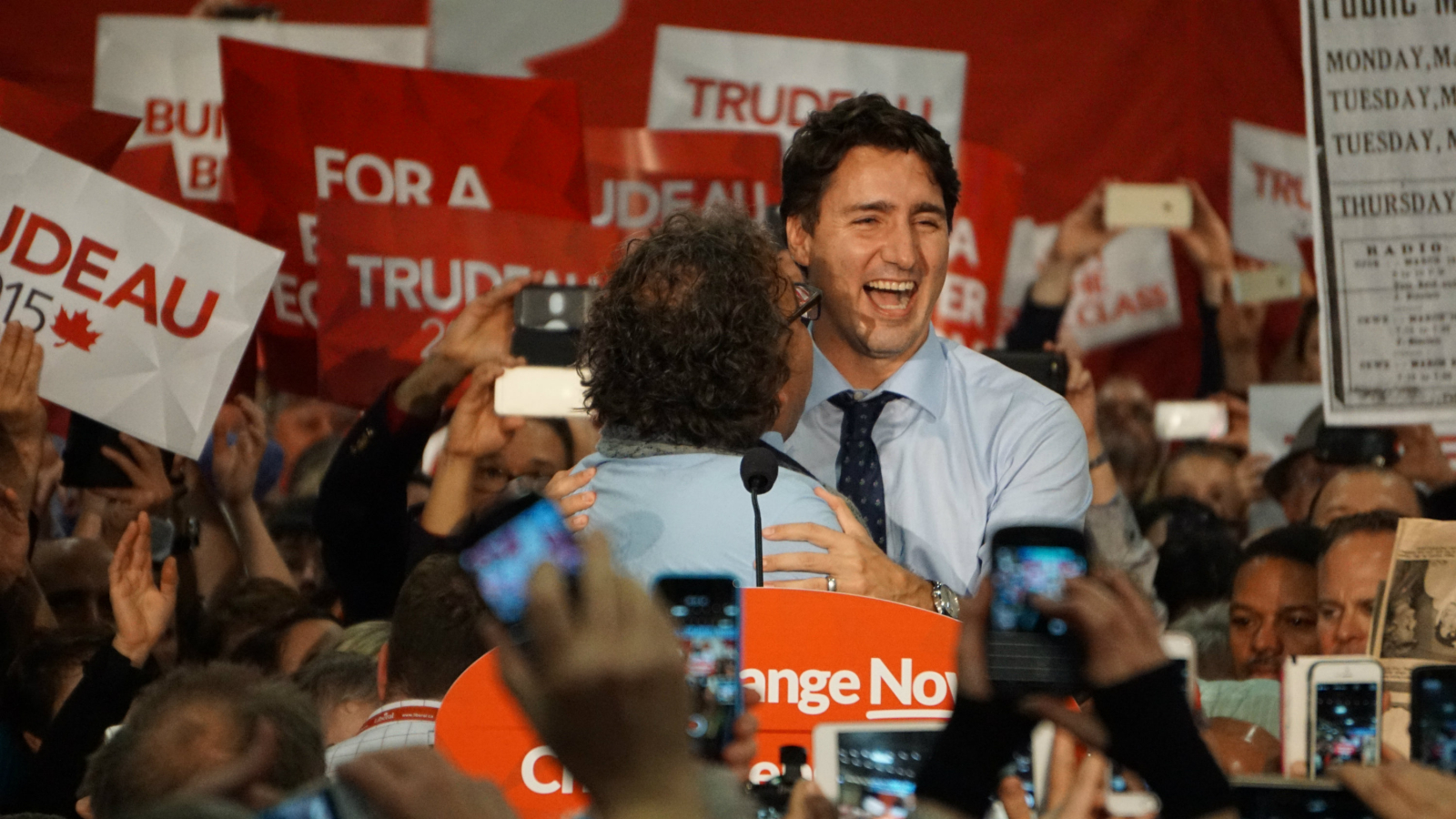 It started with a spreading tide of red, washing in from the Atlantic when riding after riding fell to a resurgent Liberal Party.

Liberal supporters crowding into Montreal's Fairmont Hotel watched on tenterhooks as their party roared back to life after a decade in the wilderness.

The moment of decision came at 9:30 p.m. Eastern Time, when polls in the battleground provinces of Ontario and Quebec closed. The tsunami of red continued, and just 10 minutes later the CBC declared Justin Trudeau as Canada's next prime minister— triggering a cathartic eruption of cheers and whoops that marked the final fall of Stephen Harper's decade-long rule.

"My friends,” said Trudeau in his victory speech, “we beat fear with hope, we beat cynicism with hard work. We beat negative, divisive politics with a positive vision that brings Canadians together."

Trudeau's speech was confident, upbeat, and greeted by yet more screams of joy from his supporters. While graceful towards Stephen Harper, the victorious Grit leader nonetheless took aim at Conservative legislation like C-24, which allows dual nationals and those eligible for foreign citizenship to be stripped of their Canadian nationality without due process.

The Liberals won election in 184 ridings, rocketing back from near-death four years ago to majority territory, fulfilling Trudeau's promise to rescue Canada from Harper and "give it back" to Canadians.

His Conservative opponents scored 99 seats on election night, while the NDP were reduced to 44 seats, and the Bloc Quebecois picked up 10. Green Party Leader Elizabeth May kept her seat and is now Canada's only Green MP after Bruce Hyer was voted out.

Trudeau's press secretary Cameron Ahmad, just minutes before the election was called for his party, said that Harper government changes to employment insurance policies had rubbed people the wrong way in the Atlantic regions, many of whom depend on seasonal work to earn a living.

The Liberals' traditional focus on the middle class also helped his party find its way back into power just four years after the disaster of 2011.

"I think the Liberal Party had a lot of work to do and a lot of rebuilding to do and that's exactly what we did," said Ahmad, adding that a strong team, positive campaign, and addressing the needs of ordinary Canadians was key.

However, he was somewhat less clear on what the Liberals would do in repairing the damage wrought by Stephen Harper to Canada's environmental laws in successive omnibus bills, such as the stripping away of freshwater protections and laws governing the protection of oceans and fisheries, saying only that his party preferred "strong" legislation to protect the country's ecological systems.

"We'll have to take a strong look at all the laws that Harper has gutted and ensure that we commit to a strong environmental policy that protects our freshwater systems," said Ahmad.

Prior to being elected, the Liberals pledged to shift federal subsidies from oil sands industries into renewable energy, while Trudeau himself has pushed for a North America-wide climate deal to tackle global warming.

However, the new Liberal government has not yet announced a comprehensive emissions reduction target specific to the upcoming Paris Climate Talks next month.

This places Canada far behind the USA, Brazil, India, and China, all of whom have announced targets for slashing emissions and ramping up development of clean power sources.

May keen to help repair Canada

With Canada forced to play catch-up just weeks before Paris, Elizabeth May said that moves towards decarbonizing Canada's economy had to begin "the morning after" Trudeau's victory.

"We have a lot of repair work to do after nine years of Stephen Harper," said May.

That repair work also extends to electoral reforms in May's view, saying that a majority government would likely preclude the scrapping of first-past-the post voting that most Canadians want to see happen, which would only be the case if a Liberal minority was forced to work with the NDP to make such changes.

According to May, such a result would lose Canadians "the best chance in a generation of significant reforms."

Introducing proportional representation would prevent parties from winning thumping majorities on just 40 per cent of the popular vote, which both the Conservatives and Liberals have now achieved.

May told National Observer that she was prepared to help both Trudeau and Thomas Mulcair work together in a new parliament, expressing hope that such co-operation would replace the hyper-partisanship that marked the Harper era.