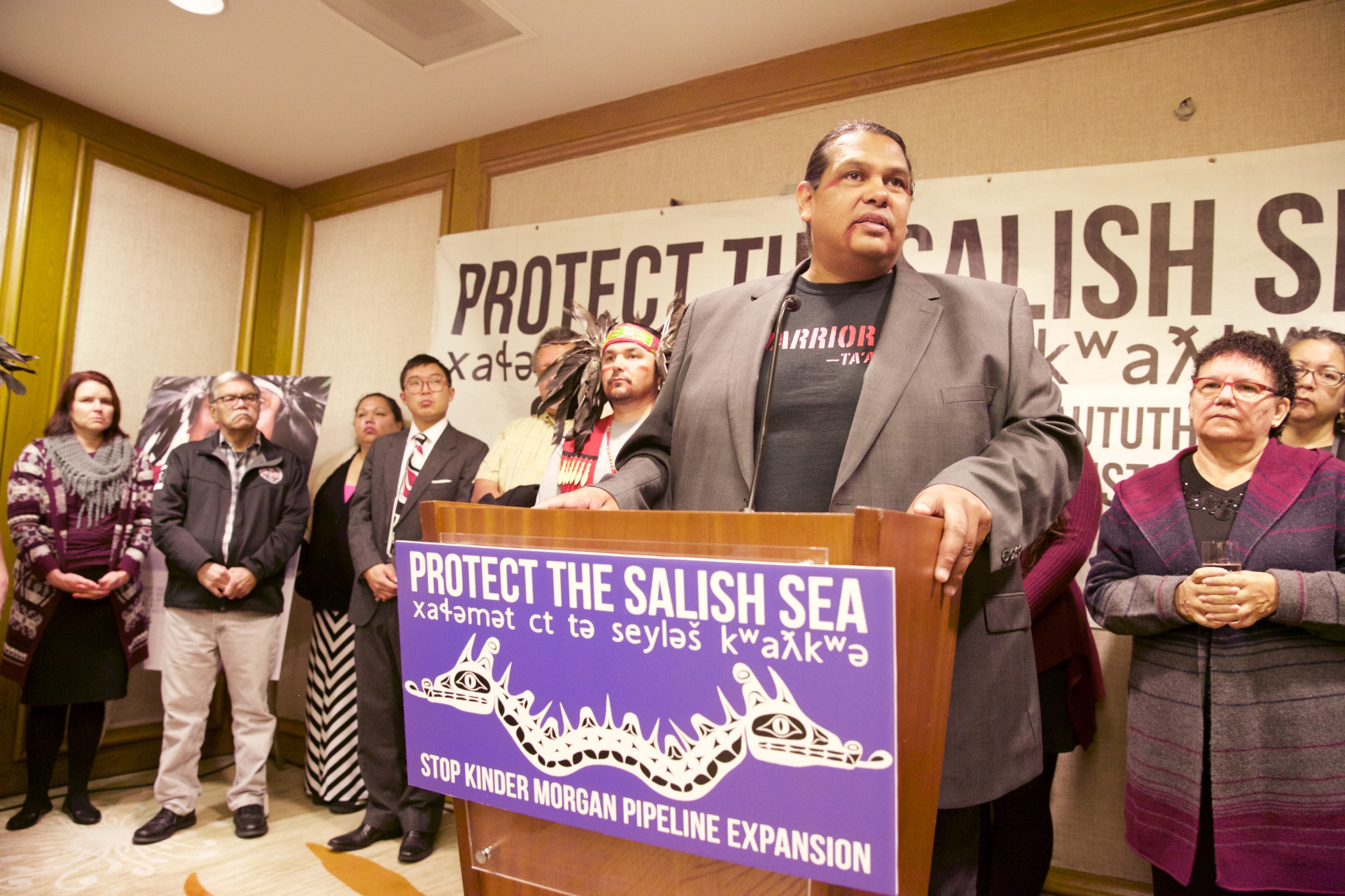 Under the banner, “Protect the Salish Sea," a North Vancouver Indigenous community announced the start of its lawsuit against the National Energy Board (NEB) in federal court on Tuesday.

Tsleil-Waututh Nation says the outgoing Harper government failed in its constitutional legal duty to adequately consult with their community when it began the NEB review of Kinder Morgan's proposed $5.4-billion Edmonton-to-Burnaby pipeline expansion more than a year ago. The band is now seeking a court order to stop the hearing.

The band believes the case will also add political pressure for the incoming Trudeau Liberals to act quickly on their election promise to overhaul the review of oil pipeline proposals. Oral hearings for citizens to speak up about the pipeline are set to begin in January 18-29 at a Burnaby casino and conference centre.

"We look forward to working with the [Liberal government] and sitting down with them," said Tsleil-Waututh spokesperson Rueben George. "Canada, with the Harper government, didn’t do its responsibility of taking care of the lands, waters, and people.”

"[This legal case] is not going to stop Kinder Morgan, but it will slow it down,” added Tsleil-Waututh Chief Maureen Thomas.

The band’s lawyer, Eugene Kung, also with West Coast Environmental Law, said they want the Liberals to re-start the hearings with greater "input from First Nations… in a way that will have the confidence of the people.”

A spokesperson for Prime Minister-designate Justin Trudeau was asked if the new federal government would reset the NEB hearing for Kinder Morgan. In response, the office stated:

"Mr. Trudeau has said that, right now, his priority remains forming a new government and presenting a cabinet to Canadians on November 4th, after which we will begin implementing our plan for growth,” wrote Cameron Ahmad from Ottawa.

He added that Liberals have pledged to "working collaboratively to ensure an environmental review process that builds trust with Canadians and communities.”

One reason the NEB process lost the trust with the Tsleil-Waututh was the lack of marine shipping in the pipeline review. The expanded pipeline would result in a more than six-fold increase in tankers in the Port of Vancouver from 60 to 400 annually.

High-profile hearing participants have also quit the current NEB process in outrage calling it biased and one-sided. The Tsleil-Waututh’s press release noted that the mayors of Vancouver, Burnaby, New Westminster, North Vancouver, Victoria, Squamish and Bowen island have also declared their non-confidence in the hearings.

"We are here to support the Tsleil-Waututh and their challenge to the process" said Vancouver city councilor Heather Deal. "We are also challenging that process. We feel it's deeply flawed. The lack of ability to challenge statements made, the lack of involvement of land owners... the lack of attention to the marine environment —it's all hopelessly flawed."

In November 2014, concerns over the pipeline flared into massive protester clashes with the company's police-protected drill-test workers on Burnaby Mountain. More than 100 citizens were arrested, including many Tsleil-Waututh.

Company spokesperson Ali Hounsell says Kinder Morgan “has engaged in meaningful consultation with 133 First Nations to date over the project, and "deeply respects Aboriginal rights and title in Canada."

"Like the Tsleil-Waututh, Trans Mountain appreciates the need for a healthy Salish Sea, and we are committed to safe and environmentally responsible operations. As always Trans Mountain stands by our commitment to engage with First Nations and invites Tsleil-Waututh Nation to come to the table and engage in clear productive conversation,” she also wrote.

The court hearing is expected to rule on the case in about a month.

Texas-headquartered Kinder Morgan is seeking to triple the flow of its existing Edmonton-to-Burnaby pipeline, from 300,000 to 900,000 barrels of oil per day for tanker export.

The NEB wouldn't comment on the specifics of the band's case, but said the board is "committed to a thorough and fair environmental assessment" of the Trans Mountain Expansion Project, and that its "processes are fair and guided by legislation," wrote spokesperson Tara O'Donovan on Tuesday.

The "Salish Sea" is the name given to the waters of the Pacific Northwest Coast, including the Strait of Juan de Fuca, the Strait of Georgia and Puget Sound, used by Coast Salish indigenous peoples since time immemorial. The waterways are also where tankers from the Trans Mountain pipeline expansion would traverse.