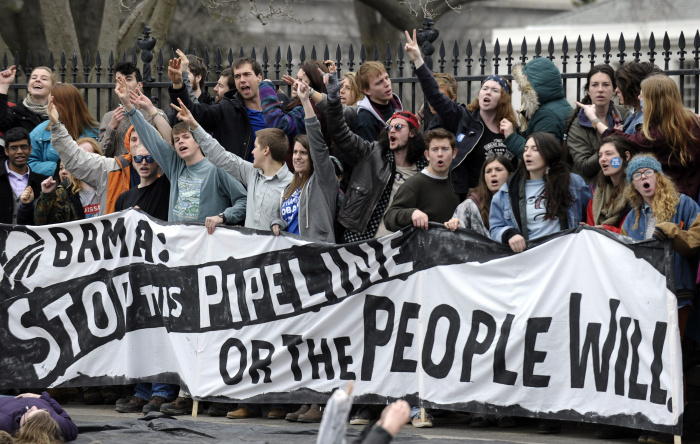 Students wait to be arrested after marching in Washington from Georgetown University to the White House to protest construction of the Keystone XL pipeline in March 2014. Photo by Associated Press.
Previous story
Next story

TransCanada will not sit idly by and take no for an answer.

After the energy giant’s Keystone XL pipeline was rejected by U.S. President Barack Obama on Friday, the corporation has said it will consider filing a new application for a presidential permit.

“Today, misplaced symbolism was chosen over merit and science — rhetoric won out over reason,” said TransCanada president and CEO Russ Girling in a statement. “Today’s decision deals a damaging blow to jobs, the economy and the environment on both sides of the border.”

TransCanada estimates put the pipeline’s employment opportunity at roughly 9,000 interim jobs for Americans, with a spin-off of more than 40,000 jobs in the U.S. value chain. The corporation asserts the project would have also employed 2,200 Canadians “almost overnight,” generating millions of dollars in revenue for Canadian manufacturers.

The National Energy Board approved Keystone XL in 2010, but a U.S.-Canada deal on the $8-billion pipeline has been kept at bay by protests from Indigenous communities and grassroots activists.

“For the first time, a pipeline has been rejected because it puts our climate at risk – a litmus test that the new Canadian government should adopt.”

The pipeline’s critics were thrilled with the decision, but some oil industry stakeholders almost went as far as to say rejection of the project was foolish:

“This decision clearly flies in the face of volumes of scientific evidence that shows the Keystone XL pipeline would be safe, enhance environmental standards, and be a more cost-effective alternative to importing oil from overseas,” said Michael Whatley, executive vice-president of the Texas-based Consumer Energy Alliance.

“It also disregards the work done by the Department of State, Department of Energy and PHMSA which have collectively concluded that Keystone XL would be the safest pipeline ever built in the United States, reduce gasoline and diesel prices and reduce carbon emissions associated moving oil into American refineries."

The U.S. consumes over seven million barrels of oil per day more than it produces, and relies heavily on Canada for oil experts. The Keystone XL pipeline, proposed initially in 2008, would have carried 830,000 barrels daily from southeastern Alberta to the Dakotas and Nebraska, before whizzing it off to refiners in the Midwest and Gulf Coast.

Pipeline stakeholders have spent seven years lobbying, spending, and locked up in court battles to see the project come to fruition. Former prime minister Stephen Harper pushed hard for the pipeline in recent years, as did the the billionaire Koch brothers, who donated more than $50 million to think tanks and other pro-Keystone XL groups.

Today, prime Minister Justin Trudeau, whose government confirmed its support for the pipeline less than 24 hours ago, admitted his disappointment, but promised that it would not tarnish relationship between two of the world’s strongest allies.

“We are disappointed by the decision but respect the right of the United States to make the decision,” he said in a press release. "The Canada-U.S. relationship is much bigger than any one project and I look forward to a fresh start with President Obama to strengthen our remarkable ties in a spirit of friendship and co-operation.”

Many Canadians applauded the decision however, claiming that it set a “new precedence” in putting clean energy and climate protection ahead of immediate economic gains.