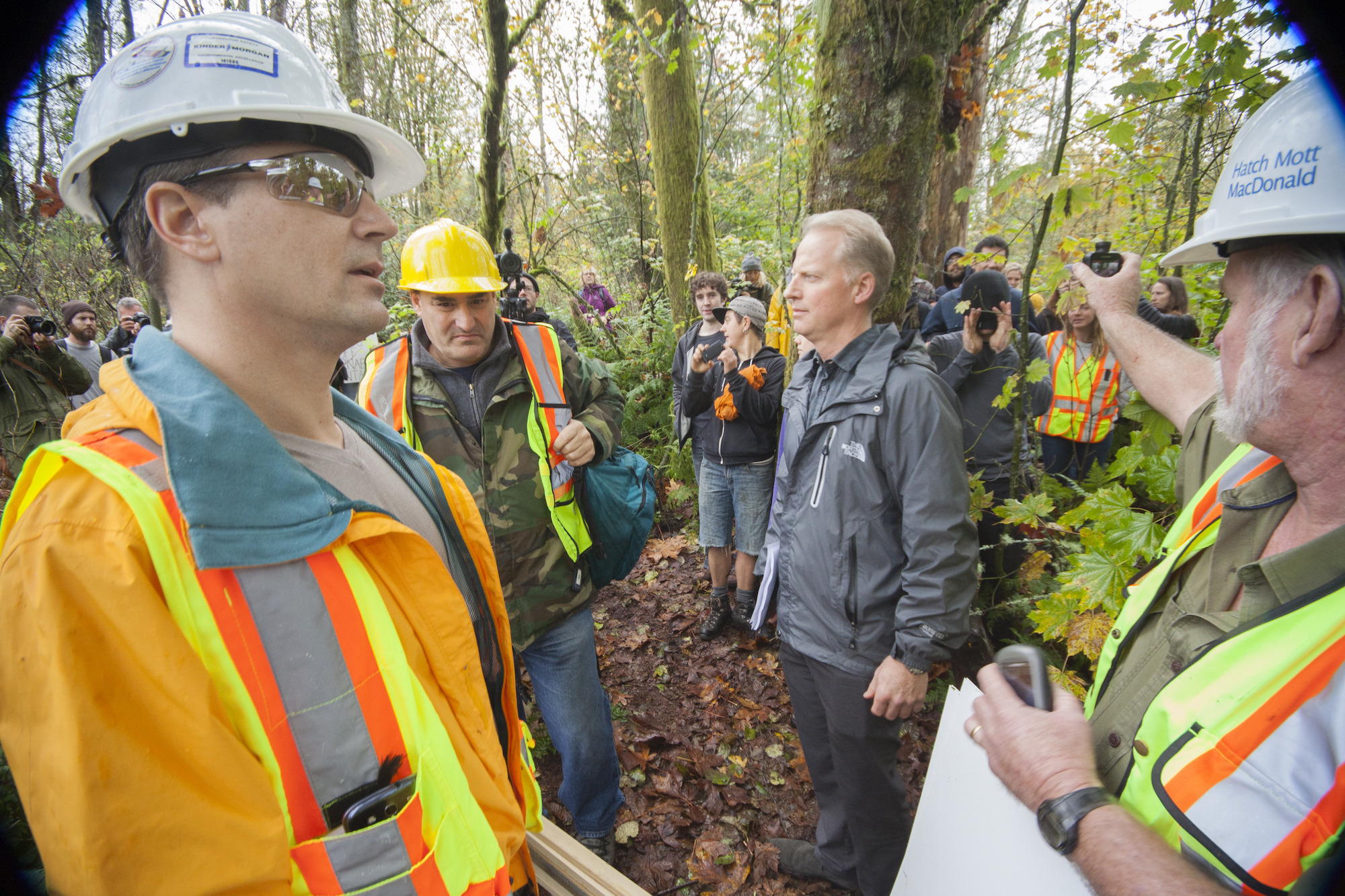 The preliminary capital cost for Trans Mountain’s expansion has quietly risen 25 per cent—from $5.4 billion to $6.8 billion. Kinder Morgan Canada president, Ian Anderson, flew down to Houston last month to ensure U.S. investor analysts were informed, but hasn’t advised any of us here in Canada.

He had a perfect opportunity at an energy conference in Calgary last week, but it seems, he missed it.

In July I wrote Kinder Morgan Inc. (KMI), Trans Mountain’s U.S. parent, to enquire about the project’s capital cost. I was sure the estimate had changed.

The thing is, the Canadian dollar had been significantly discounted to the U.S. dollar for some time and expectations were it would remain low. Even in “as spent dollars” it is not possible for the capital budget in U.S. and Canadian dollars to remain the same. What’s more, the Board had attached draft conditions and the in-service date had been pushed. Either the SEC or the NEB was being misled.

Attempts to obtain a response from KMI went unaddressed. Finally on September 20, 2015, a spokesperson from Kinder Morgan Canada told me not to expect answers.

In an email I was informed,“Kinder Morgan will update its cost estimates for the proposed Trans Mountain Expansion Project as per its agreements with its Shippers and regulatory requirements as per the commercial agreements filed with the National Energy Board.”

I knew what that meant. I had read the agreement. It meant Kinder Morgan had no intention of making the Canadian public, or the NEB, aware of a jump in its estimated capital cost until after it got the green light to build its project. Kinder Morgan appears to be skirting the negative implications of Trans Mountain’s increased capital cost by keeping Canadians in the dark.

More than an hour and twenty minutes into KMI’s third quarter earnings call in Texas, on October 21, Ian Anderson explained to analysts why the capital cost for Trans Mountain expansion increased to $6.8 billion (CAD).

“As far as the costs go, we’ve been reporting…um… $5.4 billion US dollars for the project for a number of quarters now and that is still a good forecast. The project was originally…um…filed with the regulator as a $5.4 Canadian dollar project so if you convert the $5.4 American, that’s about $6.8 Canadian today and a few things have driven that. Most of them scope changes to the project, foreign exchange on non-Canadian sourced goods and materials as well as the impact of the delay. So if you add those three factors together, the project is currently sitting at about a $6.8 billion Canadian forecast, or about the $5.4 billion US we have been reporting.”

The Canadian capital cost is what is important to the project’s commercial viability. It’s that cost that drives toll rates shippers will pay to send petroleum products along the existing and new pipeline once the system is expanded.

As capital costs increase, so do tolls shippers pay. If tolls exceed a certain limit, shippers can walk. As Mr. Anderson explained, “a toll to our customers in excess of $6.8 billion—that gives them the out.”

Kinder Morgan has take or pay contracts with 13 shippers—11 have signed on for 20 years and two for 15. This means that if they don’t use the capacity, they pay anyway. That’s a liability worth about $2 billion for the average shipper.

Don’t expect any of Trans Mountain’s shippers to say they want out at this point, even as they’re backing away from oil sands projects. They are under a legal obligation to speak well of the Trans Mountain’s expansion until its through the regulatory process. No matter what happens, shippers who have signed up must publicly support Trans Mountain in getting the regulatory approval it seeks. It’s in Clause 2.2 of the contract.

If shippers want out, they have to wait to tell Kinder Morgan until after the Trans Mountain project is approved and the NEB has issued the Certificate of Public Convenience and Necessity (CPCN).

It’s this certificate that permits Trans Mountain to build and operate its pipeline. Within 90 days of getting the permit, Trans Mountain will deliver a CPCN Cost Estimate to its shippers along with the toll rates the new estimate triggers.

The CPCN Cost Estimate may end up being higher than $6.8 billion. The current budget is not as detailed an engineering estimate as the CPCN estimate must be. As well, the NEB has not finalized the conditions Kinder Morgan will be required to meet.

The pertinent issue right now, though, is where the NEB is on this issue. The Board said it would assess the viability of the project. It’s one of the few areas it deemed worthy to include in its outrageously limited scope of issues. When increased capital costs let shippers walk, the project’s viability is threatened.

This is how the Board conveniently remains within the bounds of plausible deniability while putting the public interest at risk. Information casting doubt on Trans Mountain’s viability is considered only if it is filed on the hearing record, but the Board asks no questions to ensure it gets there.

Kinder Morgan has no legal obligation to provide the information until the Board asks the company to do so.

The Board can pretend in its report to Cabinet that the capital cost estimate is $5.4 billion CDN when it is not, and contend shippers are bound, when they aren’t.

This is another example of how the NEB will fail the public and why the Liberal government promise to overhaul the NEB and redo Trans Mountain’s review can’t happen soon enough.