As carbon cuts loom, some Canadians have lots of clean energy, others none 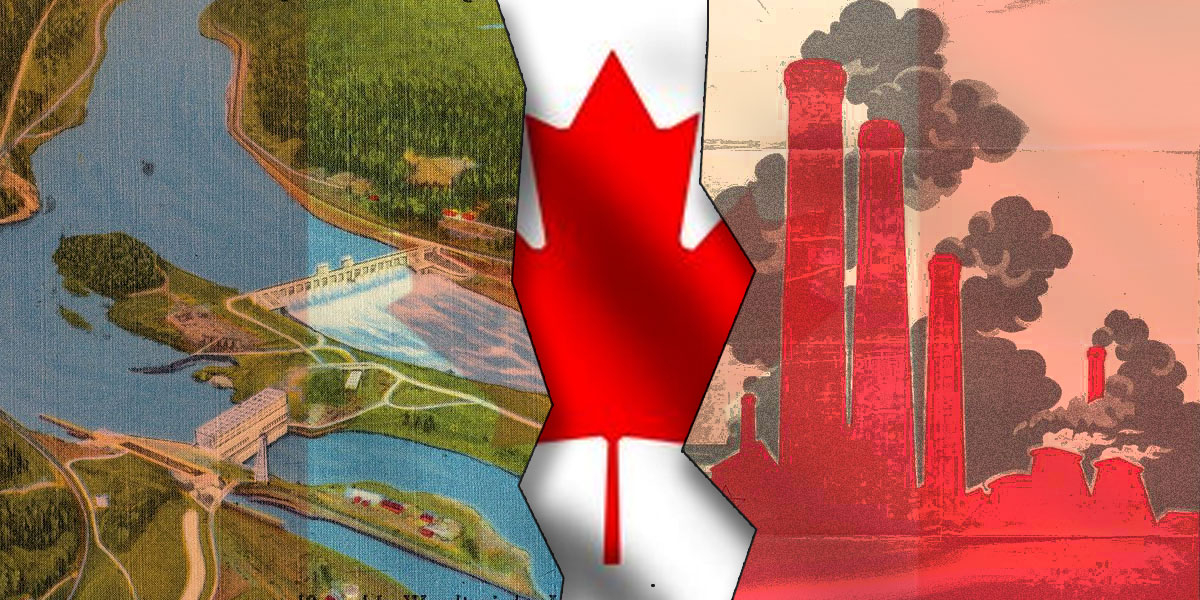 Canada finds itself divided into clean energy "haves" and "have nots". Which side do you live in?
Previous story
Next story

With the recent worldwide surge in climate commitments, Canadians could soon find themselves having to cut back on fossil fuels much faster than expected. If so, where you live in Canada could make a huge difference. Are you one of Canada's clean energy "haves" or "have-nots"?

Here's an illustrated guide to energy—clean and dirty—in each province.

Perhaps the clearest signal that the global energy system is shifting dramatically came from US President Obama as he rejected the Keystone XL pipeline:

"[I]f we’re going to prevent large parts of this Earth from becoming not only inhospitable but uninhabitable in our lifetimes, we’re going to have to keep some fossil fuels in the ground …

[T]he time to act is now. Not later. Not someday. Right here, right now. And I’m optimistic about what we can accomplish together."

President Obama certainly isn't the only one getting serious about switching away from fossil fuels to clean energy. Consider:

As Canadian businesses and citizens start looking in earnest for clean energy to use instead dirty energy, they will find very different options available depending on which province they are in.

In Canada, the vast majority of clean energy is in the form of electricity—and electricity is a provincial affair.

As you can see, where you live in Canada makes a huge difference.

As the chart shows they all generate nearly carbon-free electricity. Over 96 per cent of generation comes from zero-carbon sources.

Ontario is home to another forty percent of Canadians. In the last few years Ontario pulled off the single biggest climate success so far in North America by shutting down all of its coal-fired power plants. The transition has been assisted by Ontario's nuclear reactors, which provide 60 per cent of its electricity mix. While nuclear as an energy source is expensive and not without its own controversies, its carbon footprint is small. As a result Ontario has eliminated two-thirds of the total climate pollution from their electricity supply in just eight years.

That is twice as much and six times faster than America is aiming for with Obama's ambitious "Clean Power Plan." So quit your whining Texas.

PEI is the last of the provinces that generate super clean electricity. However they don't generate very much of it and instead rely on imported electricity for most of their supply. They are less clean-energy secure than the others, as we will see later on.

Canadians that are stuck with super-dirty electricity

The people and businesses in these provinces face the carbon-restricted future with virtually no clean energy available to them. Switching to electricity in these provinces won't cut climate pollution. It's now been 23 years since the first international treaty on climate change and yet these provinces haven't developed any significant amount of climate-safe energy for their citizens to use.

New Brunswick is transitioning out of the dirty-electricity club. They cut the carbon intensity of their electricity by nearly a third since 2005. As a result they are now where Ontario's electricity was back in 2000. Will New Brunswick be the next province to make the leap into clean electricity? 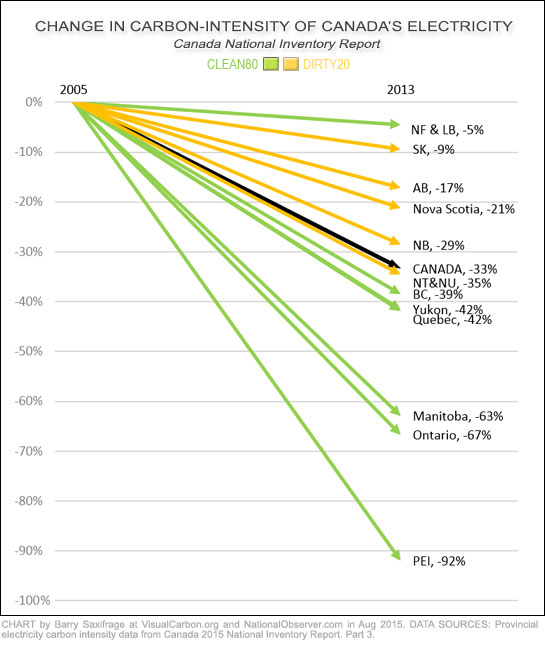 In another sign of the growing pressure for cleaner energy, every province in Canada is now working to clean up their electricity. My second chart show the impressive recent reductions, across the nation, in the carbon intensity of electricity.

As mentioned, Ontario was able to quickly cut two-thirds of the climate pollution out of their electricity by shutting all their coal power plants.

And this week Nova Scotia released a new electricity plan (pdf) with a new goal: "By 2040, the province will have moved from among the most carbon-intense electricity generators in the country to a green powerhouse."

Who's got clean-energy security?

So far we've been looking just at electricity. Electricity, however, is only a quarter of the energy Canadians use. Canadian's directly burn fossil fuels such as gasoline and natural gas for the other three-quarters of their energy.

My next chart expands the view to include all the energy that Canadians use. It show how much clean energy each province produces compared to how much total energy (not just electricity) that is used there.

Once again you can see the dramatic difference in clean energy available depending upon which province you are in.

At the top of the clean-energy security rankings are the people of Newfoundland & Labrador. They already generate more than enough zero-carbon energy to completely replace their fossil fuel energy.

There are very few regions in the world that can claim that today. Right now, however, they export most of their clean energy and instead rely heavily on burning fossil fuels at home for most of their energy.

At the bottom of the clean-energy table are the "dirty-as-China" electricity producers of Nova Scotia, Saskatchewan and Alberta. Albertans are the least clean-energy secure, producing just one per cent of their energy from carbon-free sources.

Who's using the most dirty energy?

Finally, let's look at the dirty energy side.

Humans may care how much clean energy is available for the fossil fuel transition, but the climate doesn't. To prevent a full-blown climate crisis the only thing that matters is eliminating the pollution from fossil fuel burning. My final chart shows the scale of the dirty energy challenge each province faces.

The chart lists the amount of fossil fuel energy currently used per person in each province. As you look at the chart consider that all the grey dirty energy bars have to go away – replaced by a combination of conservation, efficiency and climate-safe energy sources. Which provincial energy system do you want heading into the low-carbon future?

Once again you can see that where you live in Canada matters a great deal.

Quebecers, for example, use the least amount of climate-polluting energy per person. They use about half the national average and five times less than Albertans per capita. As a bonus they also have a particularly large amount of climate-safe energy available to use.

In fact, Quebec is doing even better than Germany – the European wunderkind of renewable energy. They use fewer fossil fuels than the Germans and produce more clean energy. As a result, Quebecers have lower climate emissions per person than the Germans.

The next tier of dirty energy users has a large number of Canadian provinces in the range of 40 to 50 megajoules (MJ) of fossil fuel energy per person per year.

Some of these middle tier provinces— such as B.C., Manitoba, and Newfoundland & Labrador— provide a lot of clean energy for their people to use. Others like Ontario, PEI and Nova Scotia produce much less clean energy per person.

And once again Saskatchewan and Alberta are at the bottom of the table. They burn many times more fossil fuels per capita than most Canadians. And yet they have developed almost no climate-safe energy to use instead.

To make matters worse, they are the only two provinces in Canada that have actually increased their climate pollution levels since our nation's climate-pledge baseline year of 2005. It has been an audacious gamble to so completely bet on climate-damaging energy this deep into the climate crisis. The businesses and families living in these provinces will soon find out if it was a smart bet to make.

Carbon pollution is causing real and increasing damage to human society, our food and water supply, and our ecosystems. As the damage increases so will the price we all have to pay to climate-pollute.

In the last year the world has finally woken up and gotten serious about the threat from climate pollution. Canadians that find themselves stuck in provinces that only offer dirty energy face this rapidly intensifying global pressure with almost no clean energy options for the transition.

Surprise! Canada's a global leader in one area of climate action