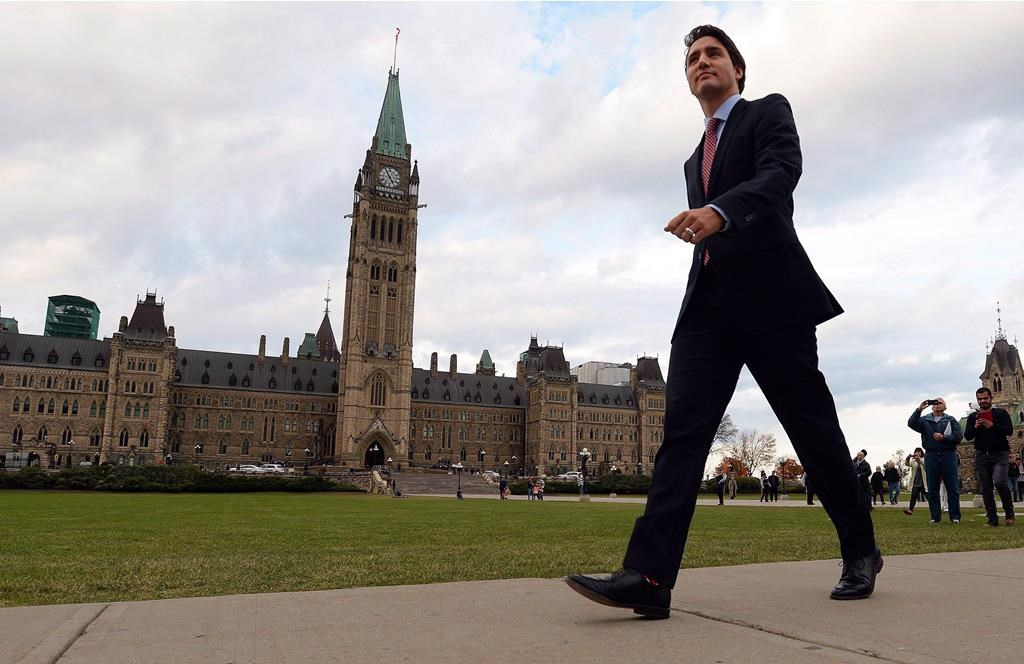 The first ministers ended their first formal meeting in nearly seven years professing a united front as they prepare for next week's opening of a United Nations climate summit in Paris.

"We'll demonstrate that we are serious about climate change," Trudeau said following a four-hour working dinner with provincial and territorial leaders.

"This means making decisions based on science, it means reducing carbon emissions, including through carbon pricing towards a climate resilient economy. It means collaborating with our provincial and territorial partners, supporting climate change efforts in developing countries and investing in sustainable economic prosperity."

As expected, the meeting did not produce a new national target for reducing emissions or policies for achieving it. The gathering was aimed more at demonstrating a new tone in the run-up to the Paris summit.

The premiers also sought — and received — Trudeau's reassurances that the influx of 25,000 refugees from Syria would be handled with Canadians' security top of mind.

Within 90 days of the summit, Trudeau has promised to hold another first ministers conference to hammer out a national climate strategy.

He'll undoubtedly find it harder to maintain a united front as he gets into the nitty gritty of setting a national emission reduction target and mediating conflicting provincial demands over how to disperse the billions he's promised in funding to help reduce their carbon footprint.

Saskatchewan Premier Brad Wall, who was noticeably less enthusiastic than his fellow first ministers about tackling climate change, signalled that he'll fight to ensure the eventual plan doesn't unduly hurt the energy industry on which his province's economy depends.

"As we are meeting, there are literally tens of thousands of Canadians who have been laid off of their jobs in (the oil and gas) sector," Wall said.

"So, as we prepare for Paris and to present a constructive and national front to the world, we need to be mindful of that fact, we need to work hard to ensure that we're doing no further harm to an industry that's facing great difficulty."

He added: "I don't think those things are necessarily mutually exclusive."

Earlier Monday as they arrived for the meeting, premiers expressed optimism that the advent of new leadership in Ottawa and Alberta will allow Canada to shed its international reputation as an environmental laggard.

They applauded Alberta Premier Rachel Notley for unveiling Sunday a climate strategy that includes a hard cap on greenhouse gas emissions from the oilsands, which have become a symbol of Canada's alleged environmental neglect. Notley's plan also includes imposition of a carbon tax and phasing out coal-fired power plants.

British Columbia Premier Christy Clark said the international focus on the oilsands has obscured measures provinces have been taking to combat climate change, including B.C.'s carbon tax which she labelled the best in the world.

"We have had a black eye for a long time on environmental issues and we have not deserved it," she said.

"But now we're getting a chance to show the world really what we've been doing all these years and I think they'll be a little bit surprised."

Under former prime minister Stephen Harper, Clark said Canada tended to "talk about economic growth more than the environment on the international stage." She predicted Trudeau will do a good job in Paris of emphasizing the country's environmental stewardship.

"Our country needs a serious effort in rebranding on this theme of climate change and energy," he said.

"Not only are we an important producer of oil ... but we're also the third largest producer of hydroelectricity in the world."

With Alberta's new plan added to measures already taken to curb carbon emissions in B.C., Ontario and Quebec, Couillard added that almost 80 per cent of Canadians are now living in jurisdictions that have imposed a price on carbon.

While Trudeau has not yet offered a national emission reduction target, his government has said it hopes to set a more ambitious target than that proposed last spring by the Harper government: a 30 per cent reduction below 2005 levels by 2030.

In the meantime, Alberta's new plan gives the Canadian delegation something concrete to trumpet at the Paris summit. At the opening of Monday's meeting, Trudeau quickly ceded the stage to Notley, giving her a national podium from which to tout what he called Alberta's "historic" climate plan.

"I'm hopeful that these policies will help us send an important message to the world next week in Paris — Canada is back," Alberta's NDP premier said.

"We are going to work together boldly, imaginatively and wisely to build a national economy that has room in it for a national energy industry that helps drive prosperity (and) for an effective approach to climate change that Canadians can finally put before the world proudly."

Stouffville has become a hot

Stouffville has become a hot spot for new housing developments thanks to its location minutes from Markham and its vibrant Main Street. Located on a lush ravine, 9th & Main Condos + Towns is a brand new condo and townhome project developed by the highly reputable Pemberton Group which promises to deliver two boutique condominium residences and a number of townhome residences which will feature larger living spaces. Pricing is expected to begin in the mid $400,000s for City Suites and from the $700,000s for the Larger Oversized Condominium Suite Collection.