Faith communities organize to save the planet at COP21 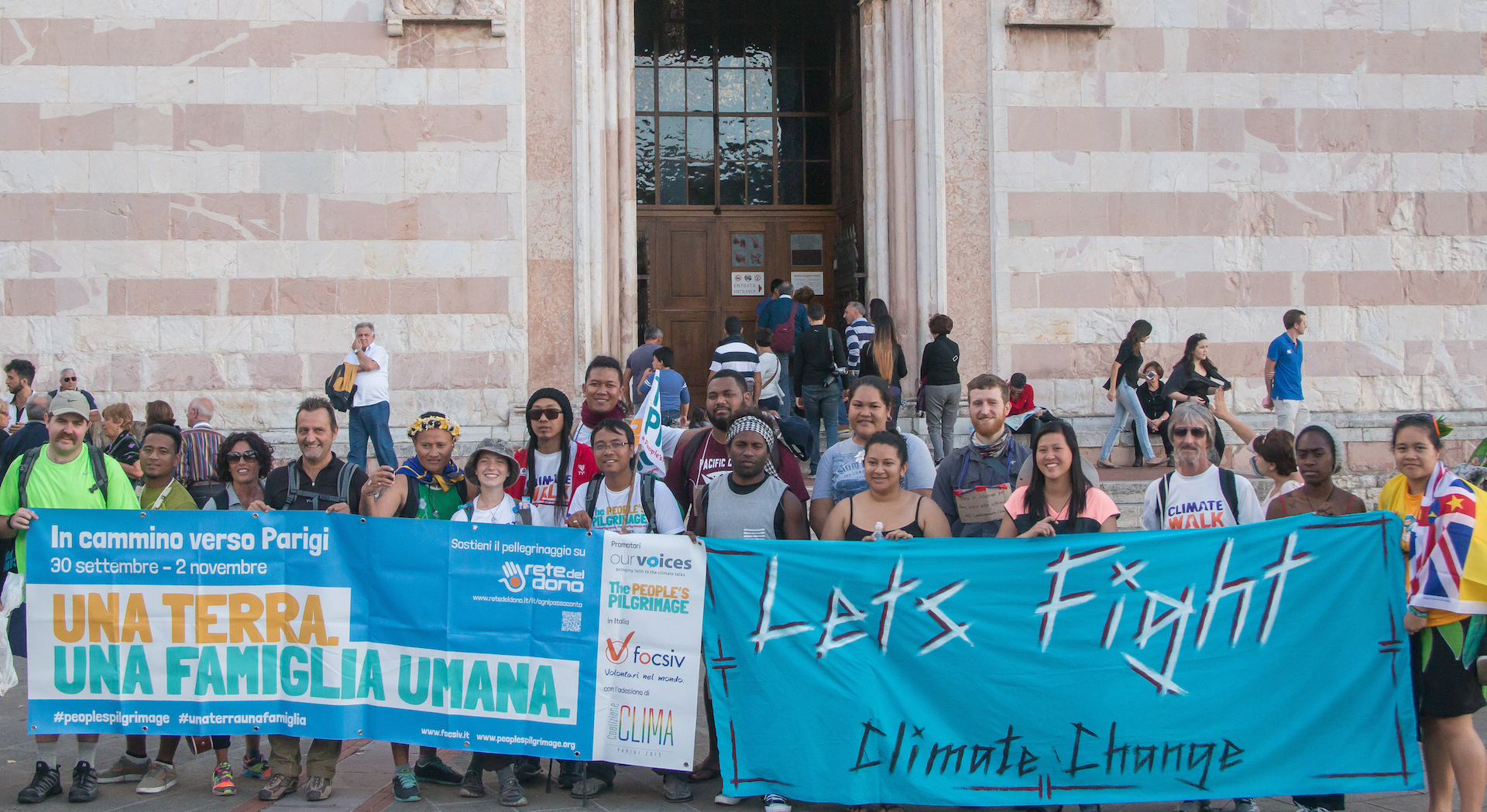 The People's Pilgrimage in Assisi, Italy.
Previous story
Next story

On September 30, Yeb Saño and others left Rome to walk 1500km to Paris in time for COP21. It was the heart of the People’s Pilgimage, a global effort to bring hope, and faith, to the climate negotiations.

Saño, a Catholic, was carrying with him a copy of Pope Francis’ powerful climate encyclical, Laudato Si. The encyclical is one symbol of a growing religious consciousness about the connections between climate change and global justice, in addition to an Islamic Declaration on Global Climate Change, a Global Buddhist Climate Change Statement, faith communities divesting from fossil fuels, and more.

Saño became a reluctant star of the climate justice movement after COP19 in Warsaw. He was attending the negotiations as the lead Filipino diplomat when typhoon Haiyan hit his home country. After weeping during a moving speech about the impacts of climate change being felt by his people, Saño then fasted for the remaining two weeks of the event, galvanizing support from faith communities and launching the #fastfortheclimate campaign.

People of faith have been active in environmental and climate action in various ways for decades. Much of this work has had low visibility – individual people of faith involved in secular climate organizations, and local faith communities working together diligently on local projects. Very little flash or publicity, and minimal communications strategy – just willing people doing the work that needs to be done.

Where faith and climate justice networks have converged, it has largely been through international development networks such as the ACT Alliance, a coalition of 140 faith and secular organizations working across over 140 countries. ACT’s Act Now for Climate Justice campaign has a strong and valuable presence at these UN talks, coordinating interfaith strategy and communications daily.

And in 2014, at the urging of UN Climate Leader Christiana Figueres, Our Voices was formed to further amplify the voices of people of faith within the climate talks.

Our Voices was a partner in the People’s Pilgrimage, which arrived in Paris on November 28th, in time to kick off interfaith cooperation at COP21. The pilgrims were greeted at the Basilica of Saint-Denis, near the conference site, for a packed interfaith service and welcome.

They then gathered with religious leaders to deliver nearly 2 million signatures from faith-based petitions for climate justice to Figueres and France's Special Envoy for the Protection of the Planet, Nicolas Hulot. The passing of petitions brought many to tears, as Saño and Figueres embraced and celebrated on stage.

The following morning the People’s Pilgrimage arrived at Paris’ Place de la Republique, where people in Paris were placing thousands of shoes in the square as a silent protest of the climate march that had been cancelled in the city due to safety concerns. Right at the front, a pair of Pope Francis’s shoes sat beside the well-worn footwear of Saño’s pilgrimage. It was a fitting reflection of the humility of faith-based groups gathered here in Paris.

Day two of the negotiations included hundreds of faith and climate leaders, including Saño, the ACT Alliance, and Our Voices, joining in a 24-hour fast for the climate, a campaign that faith networks have continued since Warsaw. In statements during a lunchtime stunt, leaders spoke to the spiritual significance of fasting as a religious practice, and the political significance of acting in solidarity with those most vulnerable to climate impacts.

Counter to what you might expect from religious groups, among this crowd there is no underlying belief that some one individual will come along and save us from the climate crisis. There’s no Messiah complex among the leaders in the room. No fight for power and glory. There is just a dedication to the task at hand, a willingness to do the difficult work and trust that it will be of benefit to the common good.

There are lots of arguments for doing a better job of engaging faith communities in climate advocacy, and there are a myriad of ways that faith communities are contributing to these negotiations. But I think this combination of humility and dedication might be the most significant.

No one leader, or policy, or technology, is going to save us. The work ahead – changing our lifestyles and challenging unjust political and economic systems that are slowing climate action – is going to require sacrifice and struggle. It’s not going to be easy. But it is right, and it will be so very worthwhile. The powerful faithful voices at COP21 have convinced me of that.

Christine Boyle is one of the United Church of Canada’s delegates to COP21. She is the Director of Spirited Social Change, and a co-founder of Fossil Free Faith. She is based on unceded Coast Salish Territory, and tweets @christineeboyle.