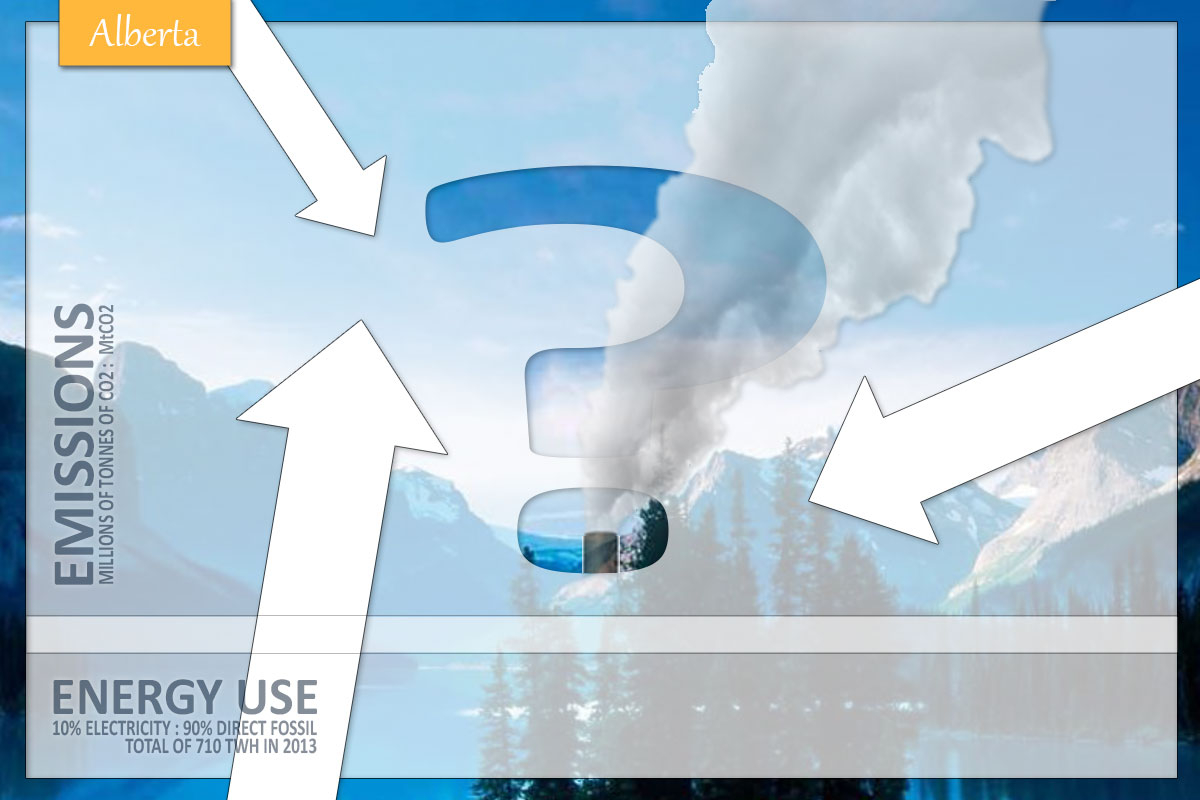 Confused by Alberta's complex new climate policy? I certainly was.

Their recently released "Climate Leadership" report weighs in at nearly 100 pages of details covering multiple proposals on coal, methane, energy efficiency, carbon taxes and more. I struggled to understand how they all fit together. How would the different policies impact emissions? Clean energy?

What I needed was a visual overview that put everything in context. Unable to find one, I spent a few days digging into the details and researching the gaps to make my own infographic. Here it is -- followed by an eight point visual tour. 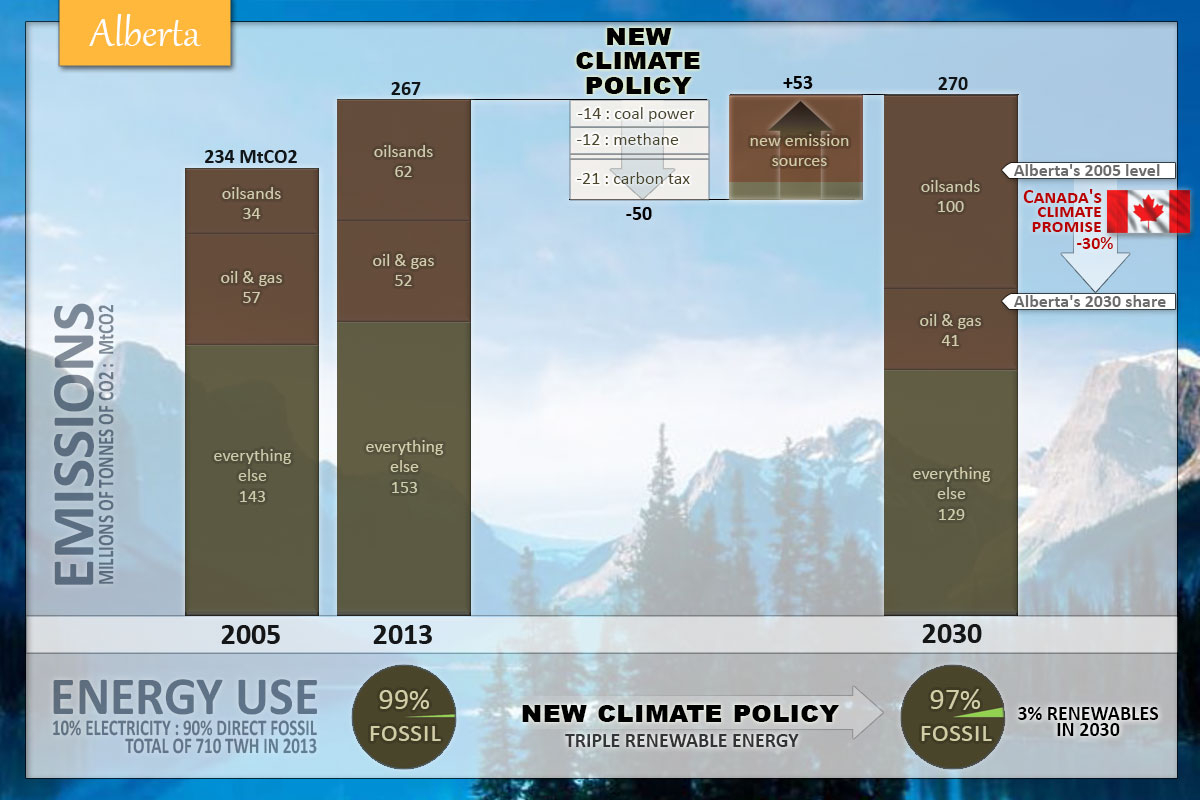 This infographic shows Alberta's emissions on the top; their energy mix on the bottom. With this as a roadmap, here is an eight point visual tour of Alberta's new climate policies. The first five points cover climate pollution; the last three, clean energy. 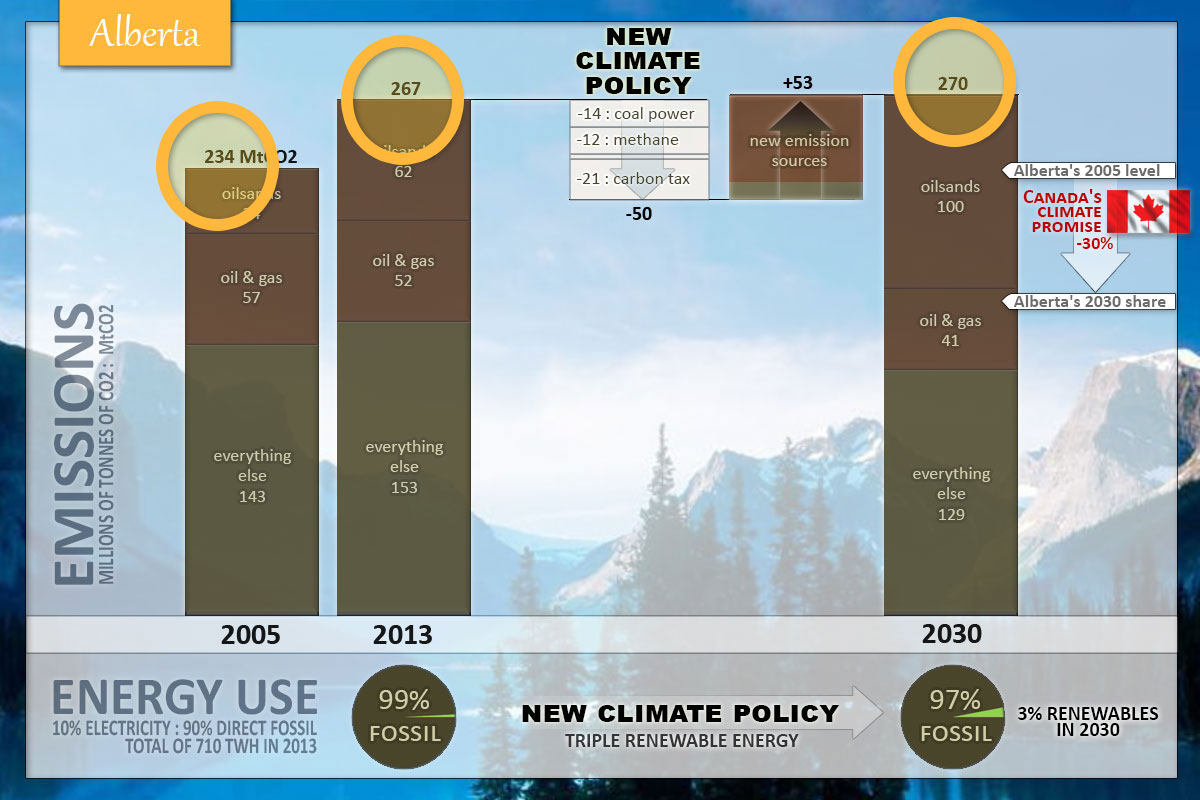 The areas circled in orange on the infographic show that Alberta's new climate policies aren't strong enough to prevent emissions from rising.

If a 3 MtCO2 increase doesn't seem like much, consider that Alberta expects it will take them fifteen years of significantly increased energy efficiency efforts to reduce emissions by 3 MtCO2. Or consider that it adds nearly an extra tonne per Albertan that will need to be cut later.

#2 – The impact of different policies. 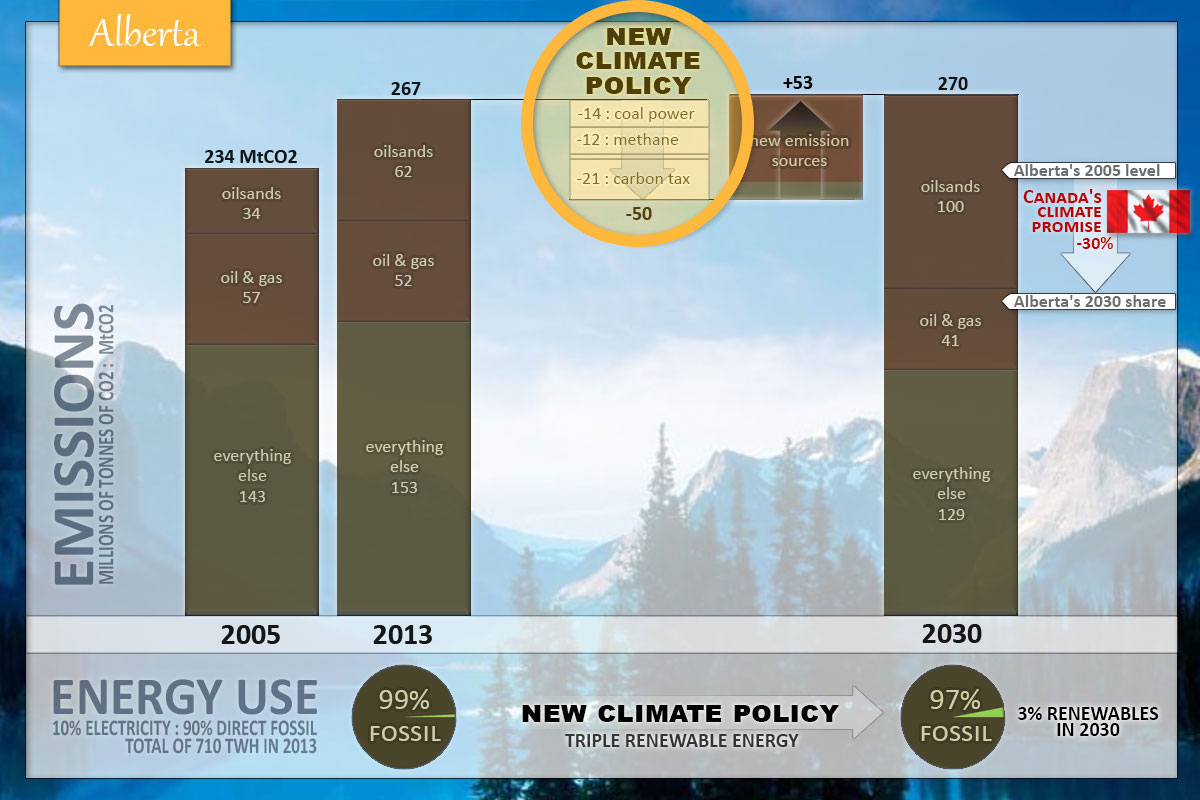 The infographic also lets you see at a glance how each new climate policy will impact emissions. The circled white boxes show the size of expected cuts.

The combined cuts from all the new policies are expected to total 50 MtCO2 per year, by 2030. This breaks down to: 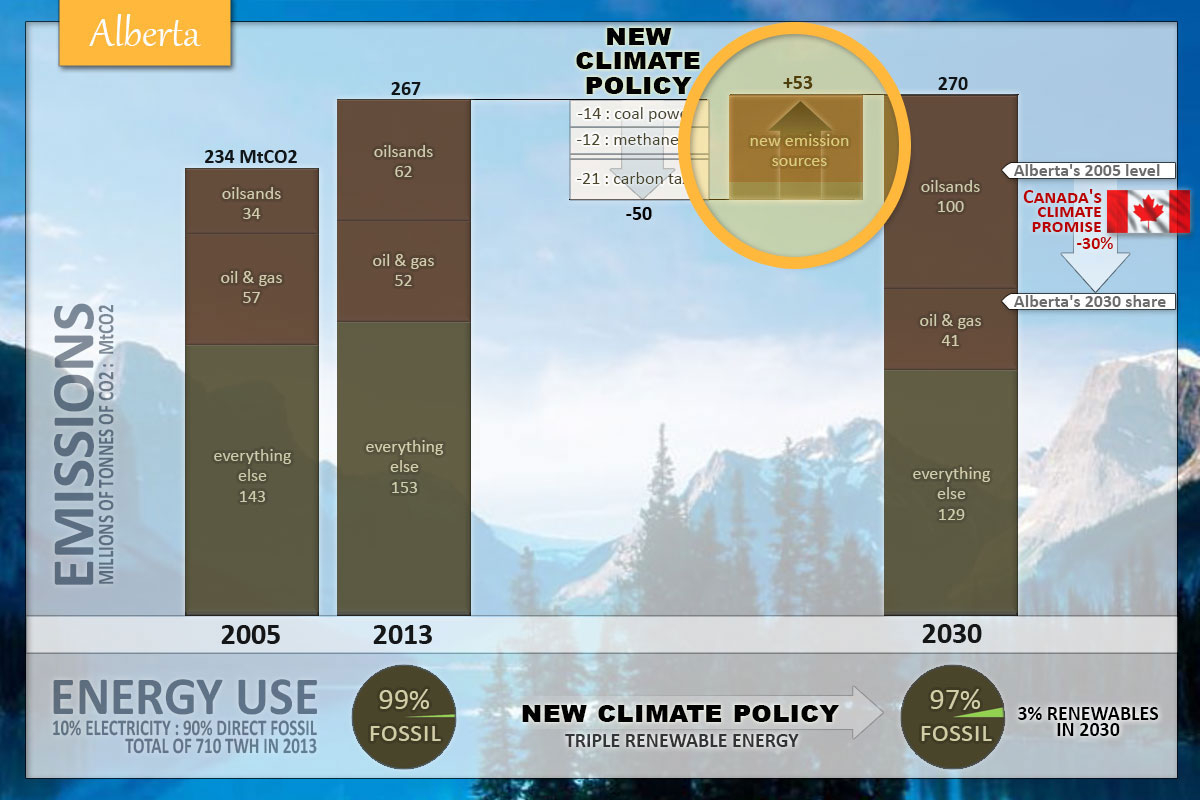 The new climate policies will still allow large emissions increases in some areas.

The total increase is expected to be an additional 53 MtCO2 per year by 2030.

As the area circled on the graphic shows, these increases will more than wipe out all the policy savings.

The net result, as noted above, is that Alberta's overall pollution is expected to increase by 3 million tonnes per year.

#4 – Oil & Gas industry overwhelming everything else 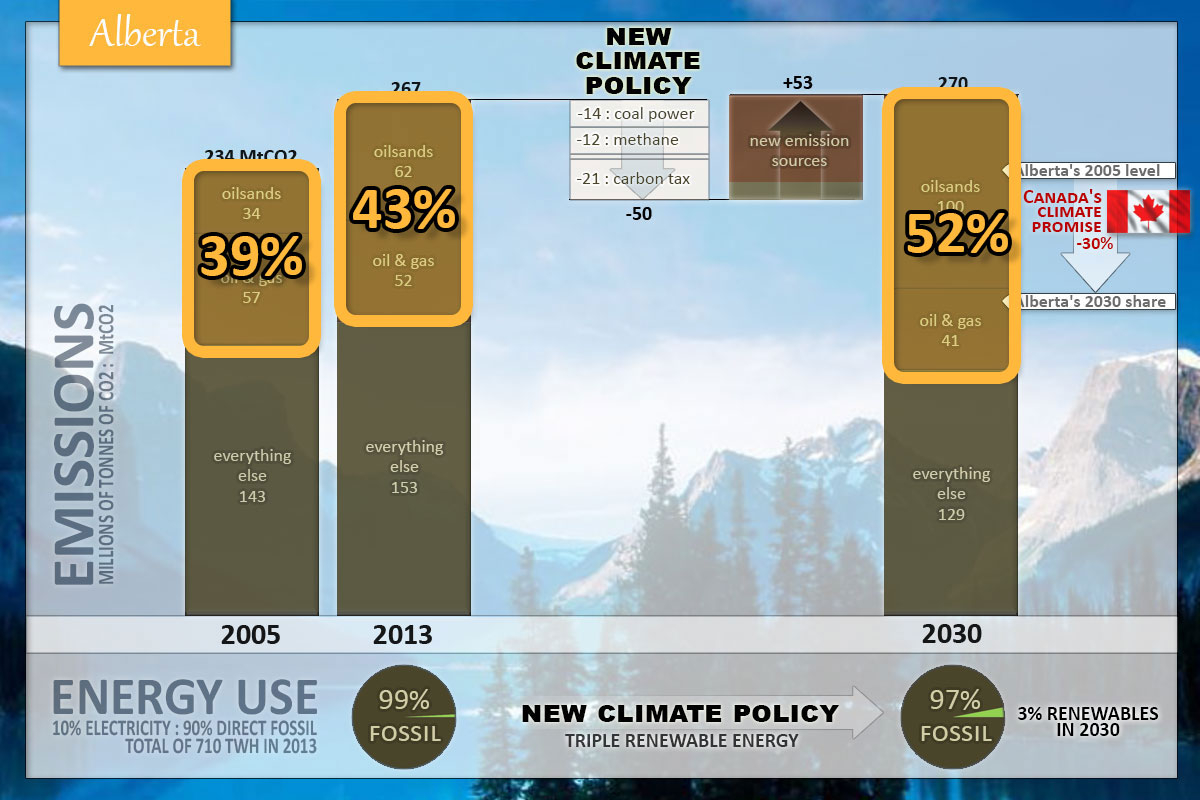 My infographic separates the fossil carbon industry emissions (red-brown) from everything else (chocolate brown). This lets you easily compare the two over time.

As the orange circled areas show, Alberta's oil & gas industry emitted 39 per cent of provincial emissions in 2005. They increased that to 43 per cent in 2013. Under Alberta's new climate policies, they are expected increase their share even faster, hitting 52 per cent by 2030. And then?

The net result of the policies is that the oil & gas industry gets to increase pollution, while the rest of the economy will cut back to offset that rise.

#5 – Alberta is forcing huge cuts on other Canadians 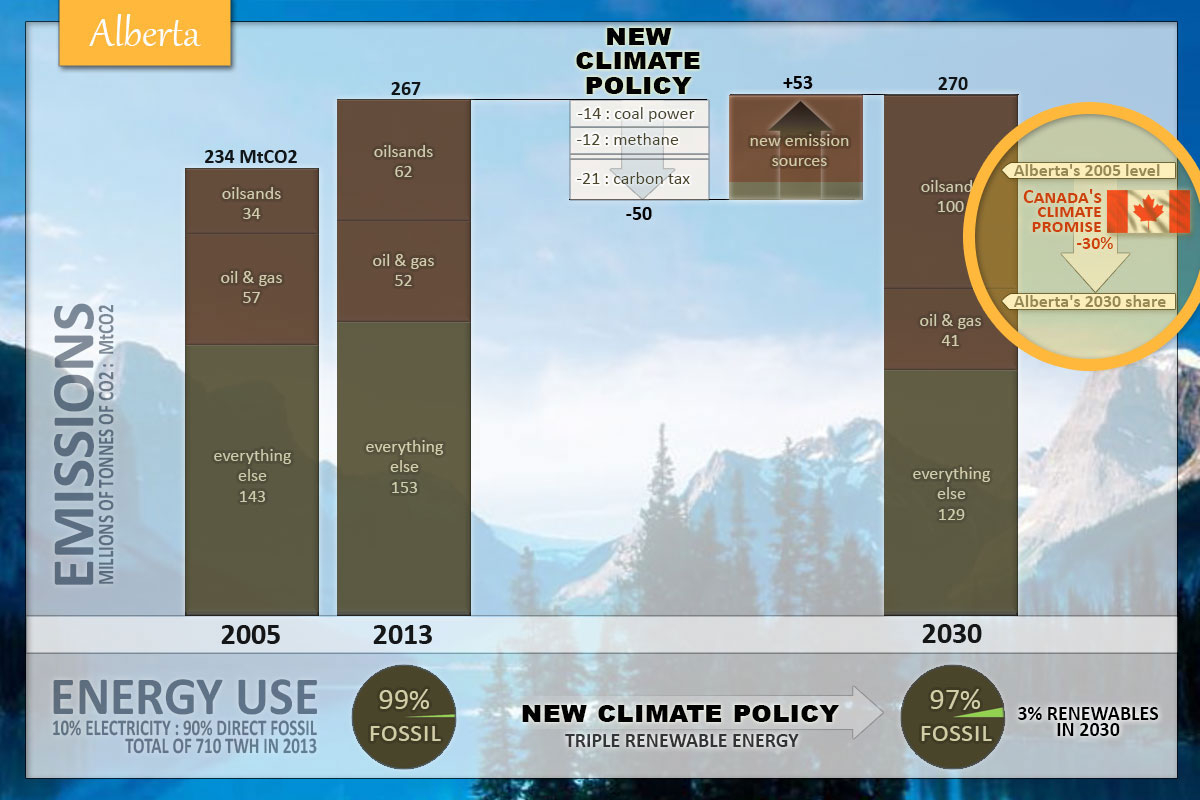 On the far right side of the infographic I show Alberta's share of that. A 30 per cent cut in Alberta would result in provincial emissions of 164 million tonnes in 2030 (bottom white arrow).

Instead, Alberta plans to increase emissions to 270 MtCO2.

That means they plan to take over half of Canada's entire national carbon budget in 2030.

Alberta spends a lot of ink explaining why they want to pollute so much. What they don't mention is how their plans will impact the rest of Canadians. I did the math.

Turns out that all Canadians not living in Alberta will have to cut their emissions by more than 50 per cent in the next 15 years so Albertans don't have to make any cuts at all. Sounds fair, eh? Reminds me of my brother explaining why he should get to eat all the rest of the pie and I should be happy doing all the dishes.

#6 – Today Alberta produces just 1% of their energy from renewables

The bottom part of my infographic shows Alberta's energy mix. 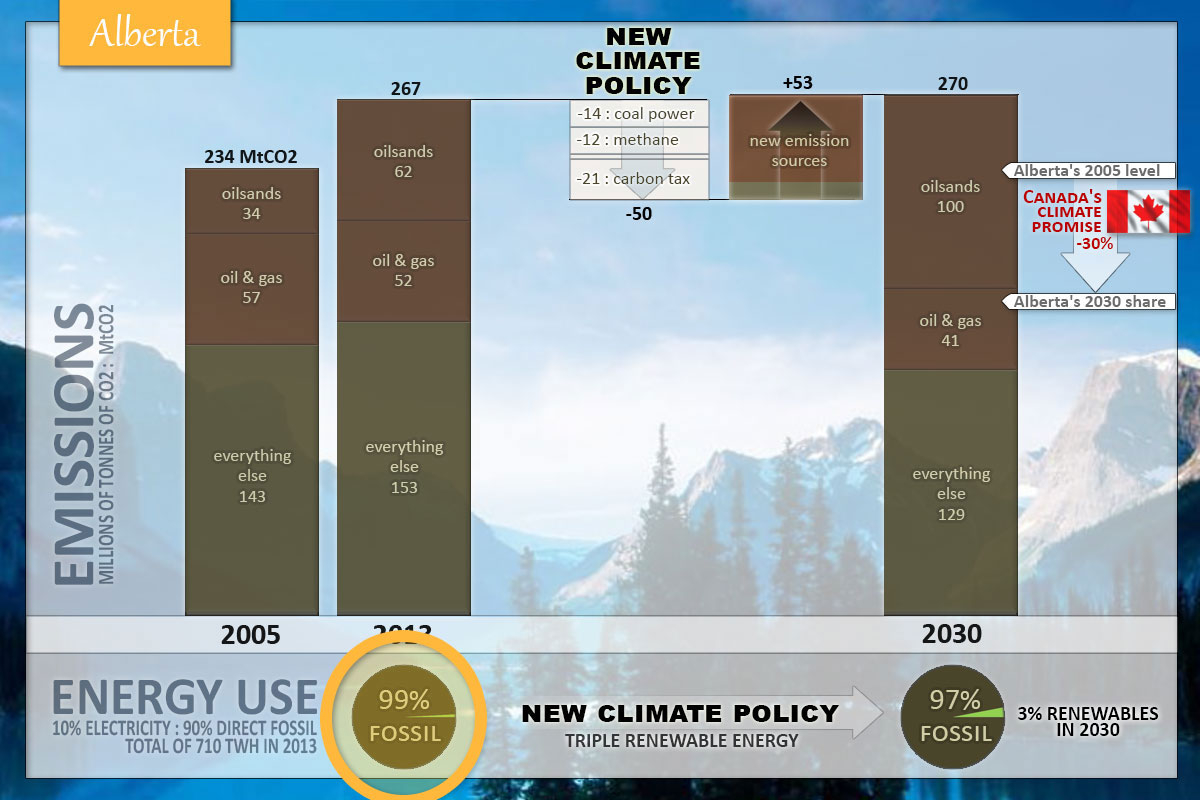 Currently, Alberta relies on climate polluting fossil fuels for 99 per cent of the energy it uses. Just 1 per cent comes from climate-safe renewable sources.

Uh...what year is it again?

As I wrote about recently, Alberta has by far the smallest percentage of clean energy in Canada. For comparison, BC produces a quarter of the energy it uses from renewables; Manitoba a third; Quebec more than 40 per cent.

Alberta's "Climate Leadership" report says renewable energy sources currently provide around a tenth of their electricity supply. What they don't make clear is that electricity is only a tenth of the energy used in Alberta. One tenth of one tenth is just one percent. My infographic provides you with the needed context. (For data geeks, StatCan says Alberta consumes 711 TWh/year in energy, and produces 6 TWh/year from renewable sources) 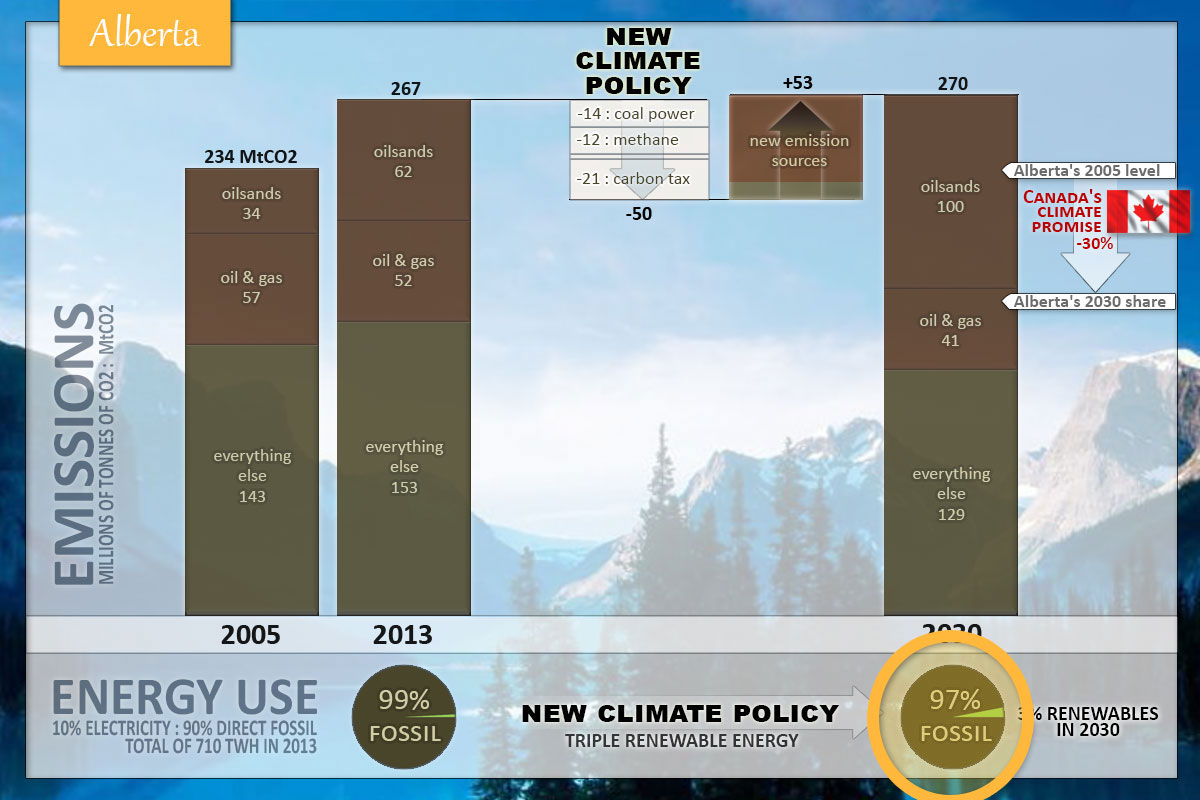 As the orange circled part of my infographic shows, this will leave Albertans dependent on climate-polluting fossil fuels for 97 per cent of their energy use – all the way out in 2030.

They will be more dependent on fossil fuels then than any other province is now.

While Alberta doesn't say whether they will be using more fossil fuels in 2030, their data points strongly in that direction.

Their energy mix will be cleaner, yet overall emissions will be higher. Their dirtiest energy source, coal, will be gone. In addition, a big whack of their non-energy emissions from methane flaring and leaks will also be gone. These all point to an even greater reliance on fossil fuels in 2030 than now.

I think there are some climate success stories in Alberta's new climate policies.

For example, having Canada's biggest coal burner say that coal needs to go quickly really adds to the momentum to shut down the dirtiest of fossil fuels. And their statement that their tar sands industry has to eventually live within some kind of maximum pollution limit is a welcome change. So I agree with Tzeporah Berman and others who say that we should take time to appreciate and celebrate these successes. They were indeed hard won.

But Alberta's new climate policies fail on the two most critical climate tasks:

On the first critical task -- cutting climate pollution -- Alberta is still aiming to increase fossil carbon for as far into the future as they care to speculate about. Way out in 2030, Alberta plans to be extracting more carbon, burning more carbon and emitting more carbon than now.

On the second point -- building enough climate-safe energy -- Alberta is AWOL. Their new climate policies aim for the floor with a trivial three per cent of energy from renewables by 2030. Heck, even "our-air-is-so-dirty-we-can-make-bricks-from-it" China is aiming for 20 per cent by then.

The bottom line is that Alberta says they can't actually lower emissions over the next fifteen years because they are far too dependent on fossil carbon. Yet their new climate policies don't change this "bet-it-all-on-fossil" dynamic. Alberta plans to arrive in 2030 with even more fossil carbon in their economy and still lacking any alternative.

At this point I honestly don't see how Alberta makes the needed climate transition on their own. They haven't bothered to prepare themselves so far. And they still aren't.

As carbon cuts loom, some Canadians have lots of clean energy, others none