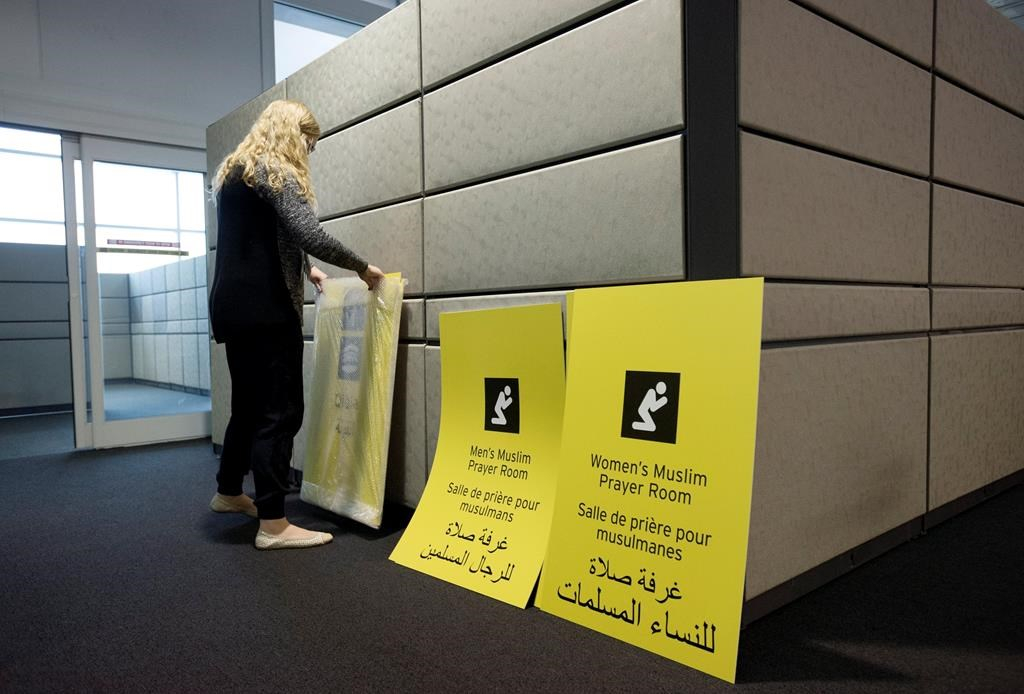 TORONTO — Canadians are preparing to welcome thousands of Syrian refugees set to arrive in the coming weeks even as the exact dates of the government-arranged flights remain a mystery.

Temporary processing centres have been set up to handle the waves of newcomers at Toronto's Pearson airport and Montreal's Pierre Elliott Trudeau airport and officials say both facilities will be ready in time for the first arrivals, some of whom could come within days.

By the time the refugees leave the airports, they'll have received permanent residency, a social insurance number and information on working in Canada, as well as a boxed meal and translators on hand to help as needed, federal officials say.

Weary parents and restless children will be able to recover from their travels — parents in rows of seating, kids in a play area equipped with stuffed animals and other toys.

The goal is to make refugees' first experiences in their new country warm and welcoming, said Heidi Jurisic, the Greater Toronto Area director for Immigration, Refugees and Citizenship Canada.

The whole process should take about three hours for those arriving on a small flight, Jurisic said.

Privately sponsored refugees will then be taken to the families awaiting them, while those sponsored by the government will be brought to temporary accommodations.

Many Canadians have rallied to help the incoming refugees, but those eager to greet them on arrival would do better to channel their energy into other efforts, she said.

"We've been overwhelmed by the outpouring of support and generosity of Canadians that want to do everything they can to be welcoming but ... we aren't going to be having external organizations and others coming into the terminal in order to provide services," she said.

Provincial officials also said Tuesday they're getting ready to roll out the welcome mat.

Hoskins said Ontario has a well-established network of settlement agencies, so the province is ready to receive them.

"I have confidence because we do this each year with the help of our community organizations for 12,000 refugees year after year," Hoskins said.

In Montreal, two Quebec cabinet ministers urged employers in the province to do what they can to hire some of the refugees.

Martine Hebert, vice-president of the Canadian Federation of Independent Business, said about 66,000 jobs currently need to be filled in Quebec.

At a separate news conference, Montreal Mayor Denis Coderre announced a hotline for citizens wanting to help the refugees and said he expects housing to be a major issue as the refugees begin arriving.

Michel Dorais will make $1,800 a day on a short-term contract to manage the influx, with the city taking in about 85 per cent of the Quebec-bound refugees.

City unions have complained they could have done the job, but Coderre said Dorais is uniquely qualified to handle the task.

Dorais said his job will be to try to put together a mechanism the mayors can use.

"It's always unprecedented," he said about the task. "What we need to understand is this has an international, national, provincial, municipal and very local dynamic that is developing."

William Swing, director general of the International Organization for Migration, said a lot of the success of the Canadian program is going to depend on what happens for refugees after they arrive in Canada. Usually, the IOM carries out sessions abroad for refugees to prepare them for life in Canada, but the way this program is being structured, all that work is going to happen when they arrive.

But he said he is not concerned about the switch.

"It's Canada, not some other country, Canada has long experience in integration," he said.

Swing said the federal government has already been active in talking to provincial and local governments and will need to keep those lines of communication open going forward.

"They are used to bringing people in, the numbers of course are larger than usual but I think the experience you have will stand you in good stead there," he said.

— with files from Allison Jones in Toronto, Stephanie Levitz in Ottawa and Sidhartha Banerjee and Pierre Saint-Arnaud in Montreal