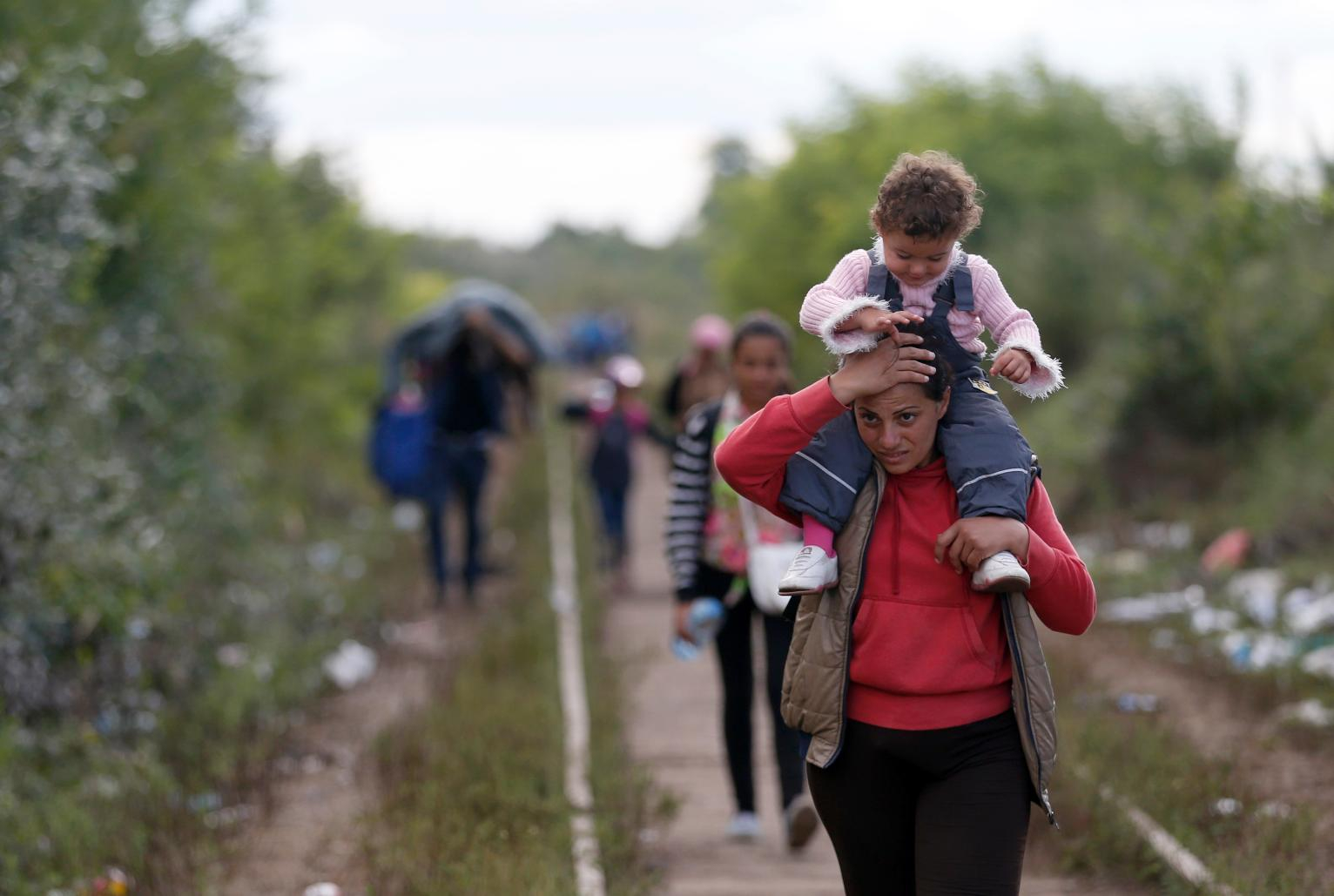 Pandering to public fears of a refugee influx, the U.K. has proposed Immigration Bill 2015 to introduce new sanctions on undocumented immigrants and "incentivize" their departure.

The bill criminalizes immigrants without formal status by providing the possibility of jail time if they work illegally, and stiff penalties for those who employ them—policies that critics say will silence exploited workers and encourage the kind of immigrant-slavery situations seen recently at a free-range egg farm in Kent.

The bill also limits immigrant access to social services, banks and drivers' licences, while setting up a "deport now, appeal later" policy that can be disastrous for children.

Currently, only one-third of refugee applicants in the U.K. are granted asylum, and the proposed legislation attempts to push those who are rejected out of the country by making it as difficult as possible for them to survive.

The U.K. is not unique in seeking ways to reject or limit immigrants. New legislation across many EU states aims to further reduce the numbers of persecuted peoples allowed across their borders. Sweden, the country currently accepting the most refugees per capita (8,000 refugees per million citizens), has implemented new laws to restrict their refugee acceptance to match the E.U.’s minimum quota.

To provide a starker comparison, Syria’s southern neighbor Jordan has accepted 600,000 refugees thus far, while the U.K.— a country nearly three times its size, with a GDP 78 times that of Jordan— has said that it will accept only 20,000 displaced people over the next five years until 2020.

The situation recalls the global response to Jewish immigrants during World War II. (At the time, Canada had one of the strictest asylum regimes, admitting only 5,000 refugees during the 12-year Nazi rule.)

Who is a refugee?

The 1951 UN Refugee Convention was created to increase international support for migrants and head off the kind of mass-displacement crises seen during World War II.

Article 1(A)(2) of the Convention defines a refugee as an individual who is outside their country of nationality or residence, and who is unable or unwilling to return due to a well-founded fear of persecution based on race, religion, nationality, sexual-orientation or political opinion.

Although a protected international right, the mindset of protectionism has made the availability of legal protection and social support a difficult commodity to achieve.

Roughly four million refugees have fled the conflict in Syria. As of 2014, only 2,081 of these migrants applied for asylum in the U.K. These two thousand people were then subjected to a rigorous application process, where only 36 per cent of them managed to win asylum.

In the U.K., the Immigration Bill 2015 stands to tighten the screws yet further on already highly restrictive immigration laws.

The phrase "illegal immigrant," although used widely by the media—and cited no less than 53 times in the first part of the Immigration Bill—is not defined anywhere in U.K. law.

The meaning can be deduced to refer to people who have gained entry into the U.K. without legal grounds to stay— and as defined by Red Cross, to mean someone who has been unable to prove that they would face persecution back home.

The connotation that surrounds the term illegal is inherently negative. But do the actions of illegal migrants warrant the connotations that precede them when they are labelled this way?

Rising crime rates, collapsing social systems, a burden on the public purse, and even a rise of Islam are the public fears that rationalize restricting migration. A study on the opinions held by U.K. school children regarding migrants shows that 60 per cent believe that “asylum seekers are stealing our jobs” while 35 per cent agreed that “Muslims are taking over our country.”

Young people’s attitudes towards race and the immigration crisis are telling reflections of the opinions held by the adults in their lives.

Despite common beliefs perpetuated by the media that immigrants mean an increase in crime rates, the reality is that those who migrate are actually less likely than the native population to commit crimes and be incarcerated.

As for the burden placed by immigrants on public coffers, The Economist commissioned a study that estimated the net financial contributions of migrants in 27 advanced countries, finding that although their net contribution is less than native-born citizens, it is a result of paying lower taxes (due to lower levels of employment) and not a result of claiming benefits.

The overall conclusion was that migrants are “neither a significant gain nor drain for the public purse.”

The concurrent fears of the "rise of Islam" are unfounded, unjust and alarmingly similar to anti-Semitic rhetoric regarding Jewish refugees in the 1930s.

"Make it harder to live a settled life"

Public ideas about the dangers and risks of accepting refugees tend to be poorly informed, leading citizens to prioritize their own (comparatively stable) economic situations over their ability to aid destitute displaced peoples. At the level of economic policy, this translates into European protectionism—a blanket term encompassing “all government regulations and policies intending to protect domestic industries"— and the rise of bills like the one currently before the British Parliament.

The Immigration Bill 2015 aims to reduce some of the "appealing factors" that have been previously available to illegal migrants in Britain, such as the availability of public services. "These measures," reads a government fact-sheet, "are intended to make it harder to live a settled life unlawfully in the U.K. and to incentivise voluntary departure."

The bill proposes to make the U.K. a less appealing destination for refugees in three ways.

First, by cracking down on migrants illegally entering the labour market by making it a criminal offence to work, and by increasing punishments on employers.

Employers will face fines of up to £20,000 per illegal worker, while undocumented immigrants can receive prison terms of up to six months for working illegally. The government can seize the wages of illegal workers and freeze their accounts.

As explained by Immigration minister James Brokenshire: "The message is clear — if you are here illegally, you shouldn't be entitled to receive the everyday benefits and services available to hard-working U.K. families and people who have come to this country legitimately to contribute.”

A return to the dark days of xenophobia

Second, the bill builds on the Immigration Act 2014 to ensure that only people living lawfully in the U.K. can have access to bank accounts. Restricting access to banking means they cannot access other forms of government aid. The law also includes a new power where banks can freeze all assets until migrants ‘voluntarily’ return to their home countries.

The law also prevents them from establishing autonomy by preventing them from receiving driving licences; makes it easier for landlords to evict them from rental accommodation; and restricts their access to basic social services.

A survey from the Joint Council for the Welfare of Immigrants found that 27 per cent of landlords said that the new Bill would make them “unlikely to take on renters who had foreign-sounding names.”

Labour MP Andy Burnham warned that the new laws could lead to “widespread discrimination” resembling the racist and xenophobic signs confronting minorities in the 1950s— when people refused to take on Irish or black families as tenants.

In 2014, 15,000 failed asylum seekers were being supported by the U.K. government, at an estimated cost of £73 million. With this legislation, the greater the rate of refugee refusal supposes greater savings to the public purse, but at what human cost?

History is watching us

The third and fourth parts of the bill “strengthen [the] immigration enforcement response” and effectively criminalize those who have “no right to be in the U.K.”

It introduces new powers of search and seizure, and a new law to allow families and individual migrants to be returned to their home countries before exercising their right to appeal to U.K. courts for a retrial of status.

Immigration Minister James Brokenshire explained that the rationale for “clamping down on illegal immigration” are the “unscrupulous people who seek to exploit it for their own gain.”

Not only are most asylum claims turned down at the first instance, nearly a third of the rulings are overturned on appeal. Keeping in mind that the U.K. asylum system is already complex, and the great difficulty in gaining refugee status, should refugees who are denied asylum but remain in the U.K. be treated as criminals who seek to exploit the social system for their own gain?

According to the Home Office Management, 44 per cent of failed asylum seekers and their dependents as of March 2015 were aged 18 and under. The Immigration Bill proposes to deport immigrants before allowing their appeals to proceed, a change that will make the success of their applications much more difficult. Is it fair to subject families and minors to such rigorous tests of legal bureaucracy?

We are currently writing history. The question is, how do we want to be remembered? As wealthy countries that protected our own economic self-interest above the lives of millions of displaced people?

No. Instead we must unite as an international community—one that has learned from the atrocities and xenophobia of World War II—and open our borders to the displaced and persecuted citizens of the world.