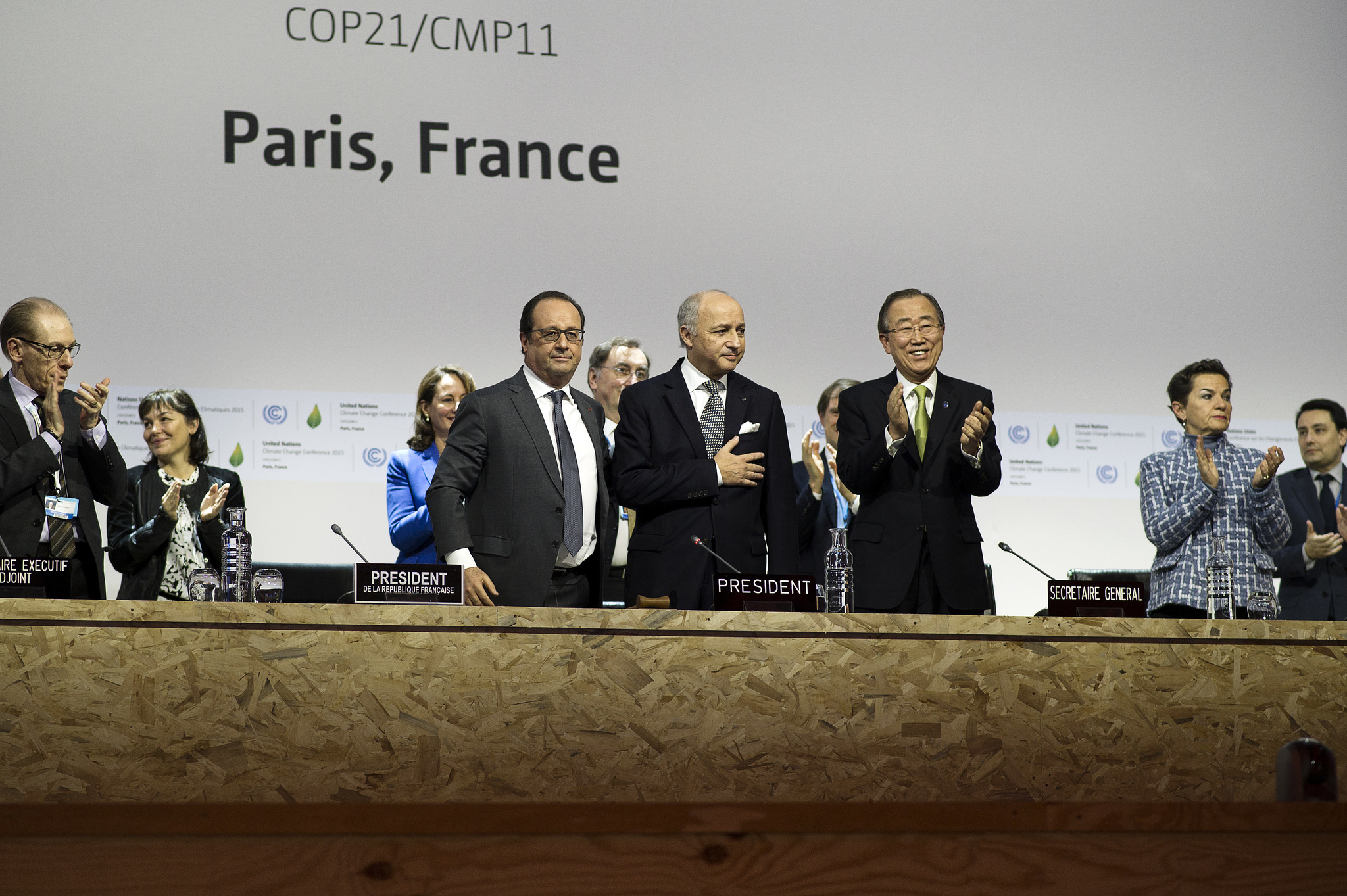 History was made today in Paris as the leaders of 195 nations agreed to an ambitious, science-based pact to move the world away from the fossil fuels that are to blame for the rapid increase in global temperatures.

After two weeks of negotiations here in the airport hangars of Le Bourget, 195 parties have signed a global pact that will curb global warming pollution and rapidly escalate the growth of the clean energy solutions the world needs.

The consensus here is that the Paris deal on the table is a good one. Could it be better? Of course. But this deal is about as good as it is going to get from a consensus process involving 195 countries.

The reduction targets in the plan are in line with what scientists say needs to happen, and most importantly this deal strikes a balance between what has to happen to avoid the most calamitous impacts of climate change, with the realties faced by developing nations that do not have the resources to go it alone in reducing fossil fuel consumption.

On a personal note, having now been involved in this UN negotiating process in various capacities for close to a decade, I have to say that this is truly an historic day for humanity.

It has been a very long road that started long before these talks here in Paris.

The Long History of Climate Negotiations

While this official UN process began 21 years ago, it was in 1988 when a panel of scientists was struck called the Intergovernmental Panel on Climate Change (IPCC), bringing together everything we knew about climate change in a series of papers that would serve as the justification for a global treaty on greenhouse gas emissions. Over the coming years, the IPCC would issue reports on the state of climate science that grew more certain in its conclusions and more dire in it predictions.

The same year the IPCC was formed, NASA scientist Dr. James Hansen stood in front of a US Senate committee and warned the government that climate change was real, it was serious and that we humans were to blame — chiefly the burning of fossil fuels.

After three years of further negotiation, a really important first global treaty to reduce greenhouse gas emissions was adopted in Kyoto, Japan. The treaty was the Kyoto Protocol and for many it was an historical moment as the world's first attempt to end the age of fossil fuels. It was also about that time that the climate "deniers" movement began. Fossil fuel companies, mainly in the coal and oil sectors, began pumping millions of dollars into think tanks and PR agencies to deny and delay action on climate change.

An awful point in our history, which looking back at it today, on this historic day in Paris, leaves me thinking there remains work to be done on the climate denial movement. Fossil fuel companies and the people they funded must and will be held to account.

Unfortunately, the Kyoto Protocol, which after further negotiations was ratified and brought into force in 2005, did not do what it was supposed to do as we continued to see the world use greenhouse gas emitting fossil fuels as the main driver of everyday life and economic prosperity.

Soon it was made clear that while politicians were starting to say the right things, there was not enough happening on the policy front in capitols worldwide.

The Kyoto Protocol was failing. But public concern was rising, the science was getting stronger and there was a burgeoning global renewable energy sector. It appeared that despite a failing UN treaty process, the world was beginning to wake up.

In fact, while this COP 21 was underway here in Paris there was news that global greenhouse gas emissions have peaked and are now falling. With a new, strong treaty now signed here in Paris, let's hope we see that trend continue.

With the Kyoto Protocol expiration date approaching and greenhouse gas emissions still on the rise, a new agreement was planned to be negotiated and ratified in 2009 in Copenhagen, Denmark. Despite massive hype and global media attention, world leaders failed in Copenhagen to agree to a new plan to reduce global greenhouse gas emissions. I remember many tears at this event, with most attendees going home with a feeling of hopelessness. Copenhagen was a hard hit for those (including myself) who had really thought the moment had come for a real deal.

However, after the tears had dried and sorrows were drowned in various beverages, there was a growing feeling of urgency.

While for the next five years, countries met annually at the Conference of the Parties, it was becoming clear that the things scientists like Dr. James Hansen had warned us about so many years ago were beginning to come true. Extreme weather events around the world, from "super" typhoons, to unrelenting heat waves, droughts and famine in the horn of Africa, to devastating hurricanes wiping out coastal towns, Mother Nature was doing its part in communicating that the clock was ticking.

Finally, here we are in Paris. Finally there is a global treaty in place that is ambitious, fair and sends the right signal out into the world.

Finally we have begun to end the age of fossil fuels. The stage is set, the lights are all in place and the curtain has now gone up on a new stage of human history. Will this all go perfectly to plan? Of course it won't, we humans are amazingly good at making things difficult.

But for right now, it is time to celebrate that regardless of all the horrible things going on around the world, we are still able to come together and accomplish what needs to get done.