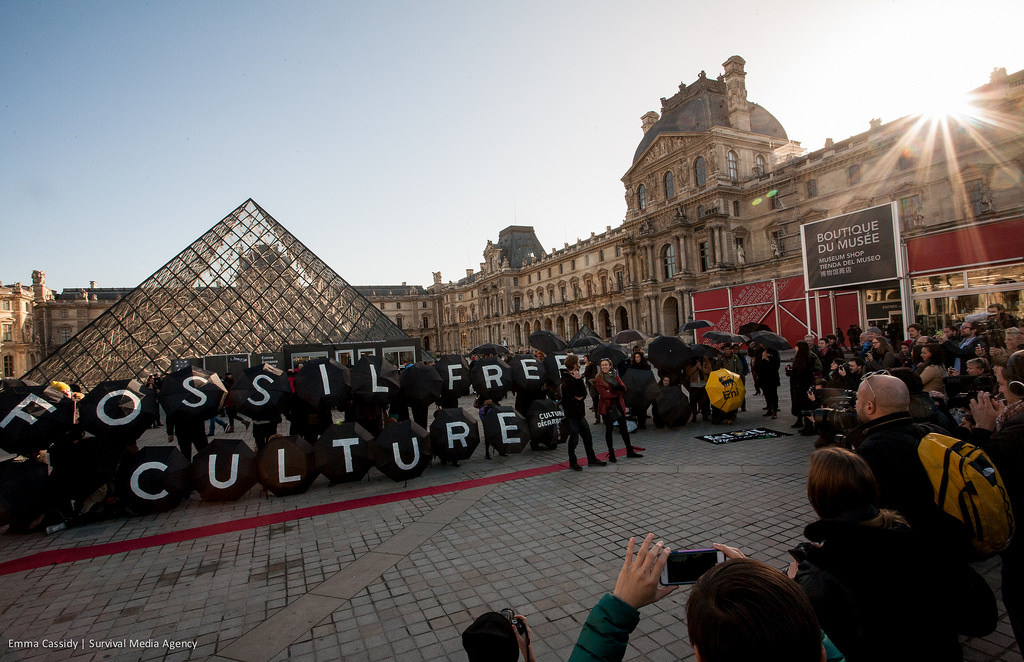 French foreign minister Laurent Fabius was moved to tears just before his country joined nearly 200 other nations in signing a groundbreaking climate deal aimed at halting global warming in its tracks.

This agreement is the product of 195 countries, both rich and poor, choosing to act together to solve the defining global challenge of our age. The deal includes assistance for developing nations on climate change's frontline, countries whose voice has been heard at Paris like never before. As such, Paris heralds the end of the fossil fuel era, and highlights the fact we are well into an age in which global development is being driven by renewable energy technologies. Its final goal is zero emissions as the world strives towards a 1.5 degrees C limit to global warming and countries must report back on progress every five years.

Climate change experts are now hailing the Paris Agreement as an ambitious deal that recognizes the urgency and scale of action required to cut greenhouse gas emissions to zero.

Michael Jacobs, Senior Adviser for the New Climate Economy project, and former advisor to UK Prime Minister Gordon Brown: “This is a historic moment. The world's governments have finally understood what the science has long been telling them - we have to act now if the earth's climate is to remain safe. Today they have committed to act - and to act together. Historians will see this as the turning point: the moment when the world started shifting decisively away from fossil fuels and towards clean and safe energy systems. Remarkably this effectively signals the end of the fossil fuel era. This is unquestionably a great success. But the work really starts now. These commitments now need to turn into policy, and policy into investment. They can congratulate themselves for 24 hours - now they need to act.”

Jennifer Morgan, World Resources Institute: “This agreement would mark a true turning point in the global effort to address climate change. The text reflects both the push for high ambition and the voices of the most vulnerable. It accelerates the energy transformation that is well underway, pointing us to a safer and stronger future.”

Monica Araya, member of the Climate Vulnerable expert group: “This agreement marks the beginning of a new era where we find good examples of climate action from all, developed and developing countries, because it is in everyone’s best interests to do so. It is no longer about who is acting and who is not, but how strong the world can act together.”

Nigel Topping, We Mean Business (WMB): ““This is a remarkable diplomatic settlement and a historic economic catalyst. The world's governments have sent a decisive signal to businesses and investors that will accelerate the shift towards a thriving, clean global economy. The Paris Agreement for net zero emissions will turn the billions of investment we’ve seen so far into the trillions the world needs to bring clean energy and prosperity to all. The diplomatic process that included businesses, investors, cities, states, regions and civil society created a powerful alliance which has clearly raised the level of ambition in the negotiations. Businesses and investors look forward to playing a continued role in turning this agreement into on the ground reality.”

Major General (ret) A M N Muniruzzaman, Chairman of Global Military Advisory Council on Climate Change (GMACCC) Bangladesh: “Military leaders, assembled under GMACCC, realising the fragility of the situation call upon leaders for urgent action to implement the Paris agreement, to save mankind from the catastrophic consequences of climate change. The Paris agreement must be more than paperwork. Its success depends on a verifiable, implementable, transparent and fair agreement which is made accountable. The military has a new, definitive, more humanitarian role, to deal with millions of people on the move, and this will only grow over time as climate impacts bite.”

Anthony Hobley, the Carbon Tracker Initiative: “A 1.5 degrees Carbon Budget means the fossil fuel era is well and truly over. There is absolutely no room for error. Fossil fuel companies must accept that they are an ex growth stock and urgently re-assess their business plans. New energy technologies have leapt down the cost curve in recent years. The effect of the momentum created in Paris means this is only going to accelerate. The need for the financial markets to fund the clean energy transition creates unparalleled opportunity for growth on a scale not seen since the industrial revolution.”

Christoph Bals, Political Director at Germanwatch: "Our experience in Germany has shown that renewable energy can be scaled up rapidly with significant economic benefit. The decarbonisation signal from the Paris Agreement will increase and accelerate these benefits, but Germany still needs to up its game. Chancellor Merkel needs to commit to a plan to phase out the use of coal within the next two decades. The Paris outcome requires developed countries to come back next year with a credible plan for reaching their 2020 targets - that just is not going to be possible without a coal phase-out."

Chris Field, Founding Director, Carnegie Institution's Department of Global Ecology: “The world truly reached a turning point with the historic Paris agreement, but this is not a time for self-congratulations. This is our moment to unleash ambition with new levels of innovation, building the clean energy system of the 21st century, developing sustainably, and comprehensively protecting people and the planet.”

Muhtari Aminu-Kano, Senior Policy Advisor in Poverty Reduction at Islamic Relief Worldwide, an international humanitarian organization, and the former CEO of Nigeria’s leading national environmental NGO: “Muslims living in some of the world’s poorest and most vulnerable countries can be hopeful that this climate deal provides a foundation for positive change. In August, Muslim leaders laid out in a declaration, grounded in the Qur’anic teachings, their vision of the low-carbon future necessary for the peace and prosperity of the planet: while COP21 reaffirmed that this vision is necessary and feasible with strong political willpower, the various positive announcements of the last two weeks (and last six years) prove that it is already on its way to becoming a reality. There is still much work to be done: the Muslim community, in continued solidarity with those from other faiths and humanity at large, must now encourage those in Paris and beyond to live out their pledges and take responsibility as stewards of the Earth.”

Rob Bernard, Chief Environmental Strategist, Microsoft: "Microsoft stands with the many voices within the private and public sectors urging the negotiators in Paris to come to a final agreement on climate change. Reaching agreement on a long-term goal framework for cutting carbon emissions and achieving GHG neutrality is critical to address climate change. It will also provide the certainty required for corporations around the world to accelerate their low-carbon investments and foster the creation of a true low-carbon global economy.”

Kathleen McLaughlin, chief sustainability officer for Wal-Mart Stores, Inc.: “We believe climate change is an urgent and pressing challenge, and it is clear that we must all do our part to reduce, avoid and mitigate the impact of rising greenhouse gas (GHG) levels. That’s why we support the UN’s call for the U.S. corporate sector to commit to science-based targets to reduce emissions. In addition, we have already successfully decoupled our growth from emissions, and recently announced that we exceeded our goal to reduce 20 MMT of GHG emissions from our supply chain.”

Kevin Rabinovitch, Global Sustainability Director, Mars Incorporated: “Back in October, we joined with the rest of the food and drink industry calling on global leaders to embrace the opportunity presented in Paris. Now really is the time for talk to become action and to meaningfully address the reality of climate change. Global policy makers should think big. Because big thinking leads to big results. Having a long term science based target will drive ideas and innovation, ultimately making what may have seemed impossible – possible. We are on the cusp of a deal that can change the world. And as a business we are committed to tackling the climate challenges that face us. We hope that global leaders will do the same.”

Professor Peng Gong, Co-Chair, Lancet Commission on Health and Climate Change, Tsinghua University, Beijing: “Beijing's first-ever 'red alert' this week, called due to dangerous levels of air pollution in the city, is a clear symbol of the crucial importance of a strong climate deal here in Paris. Concerted action on climate change, particularly through a transition to clean energy, has immense potential to protect respiratory and cardiovascular health and to improve quality of life. In China, it is estimated that over 4000 people die every day as a result of air pollution, much of which comes from burning coal, and worldwide, air pollution is responsible for 7 million deaths every year: a shocking one in eight of all deaths. By accelerating the transition to healthy renewable energy sources and continuing to scale up climate ambition over the coming years, we can protect millions of people from air pollution as well as the serious health impacts of climate change.”

Ms Johanna Ralston, CEO of the World Heart Federation: “The adoption of the Paris Climate Agreement and its embedded references to health mean that NCDs and other health issues can no longer be side-lined in the global response to climate change. The NCD Alliance and its Federations are dedicated to ensuring a comprehensive response to create sustainable environments in which we can live, work and prosper.”

Ms Katie Dain, Executive Director, NCD Alliance: “The adoption of the Paris agreement is an unprecedented victory for people and planet, and a catalyst for the next phase of action. Now, all of government and all of society must come together in a coordinated response to mitigate the impacts of global warming, NCDs and ill-health.”

Professor Hugh Montgomery, Co-Chair of the Lancet Commission on Health and Climate Change: “The impact of climate change on everything from food production to heat stress and water scarcity means it poses the single biggest threat to global health. This agreement is incredibly important for beginning to ease that health burden, ultimately saving lives. It will also set us on a path to a cleaner, less polluted world which in turn reduces costs for our healthcare systems.”

Dr. Diarmid Campbell-Lendrum, Climate Change Lead, World Health Organization: “Every tonne of carbon that we put into the atmosphere turns up the planet’s thermostat, and increases risks to health. The actions that we need to take to reduce climate change would also help clean up our air and our water, and save lives. To take a medical analogy: We already have good treatments available for climate change, but we are late in starting the course. The Paris Agreement helps us take this forward and is a crucial step in protecting our climate and our health."

Dr. Bettina Menne, Climate Lead, WHO Europe: “As doctors, nurses, and other health professionals, it is our duty to safeguard the health of our families and communities. The Paris Agreement takes us one step closer to securing a future which protects the public from the impacts of climate change - the defining health issue of this century. Today, we are leaving France with a deal that bolsters community resilience, strengthens our health systems, and helps to tackle inequalities.”