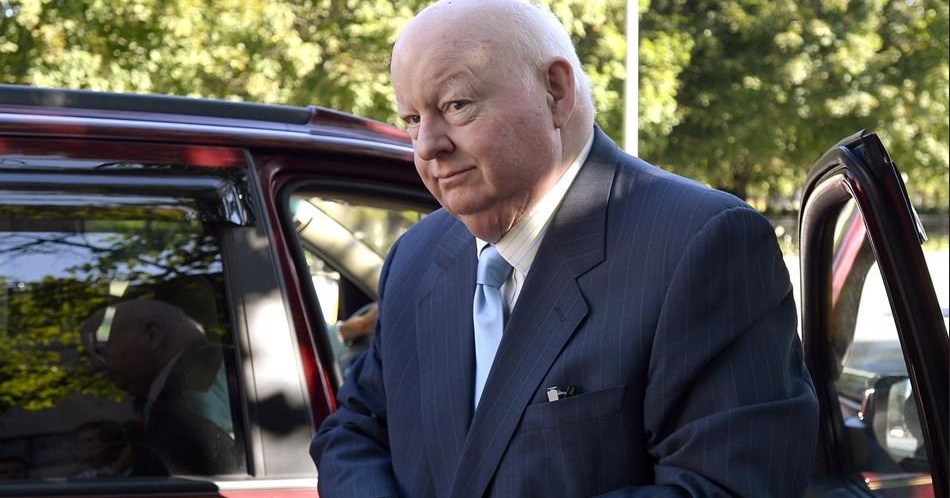 Crown counsel cross-examining Mike Duffy in his bribery and corruption trial didn't ask a single question concerning the $90,000 cheque lying at the heart of this case. To any trial lawyer, that's the clearest signal that they’ve given up the ghost on this trial.

Whether it's a dead duck, a turkey, or a Norwegian Blue parrot, the party's over for this bird. Duffy will walk on the bribery counts.

Stripped of legal flotsam and jetsam over hairdressers and personal trainers, this case was always about one thing and one thing only: the personal cheque from then PMO chief of staff Nigel Wright to Mike Duffy. Or rather, to be exact, a bank draft to Duffy’s lawyer in the amount of $90,172.24.

According to the RCMP and Crown theories, Mike Duffy accepted a bribe from Nigel Wright of same. On Thursday, the Crown quietly folded its tent.

Those charges always reeked of unfairness. Bribery, like drug trafficking, ensnares both sides in the transaction. If the Crown’s theory was that Mike Duffy had accepted a bribe from Nigel Wright, it never washed that Wright wasn’t charged.

As evidence emerged from witness after witness at trial, the worse that unfairness rankled until, by the time Mike Duffy had concluded his testimony, even the Crown couldn't keep up the pretense any longer.

Duffy's so-called bribery fails just about every single test in criminal law. While there are some minor disagreements between some on what happened (and especially on the thrilling sideshow of what Harper knew), the central narrative that emerged was agreed by almost all the witnesses.

Nigel Wright is unquestionably the architect of the entire repayment scheme, start to finish.

Taken as a whole, the entire trial revealed Wright as an implacable and unrelenting force who dominated all aspects of the PMO and Senate strategy. His laser focus was fixed squarely on the political interests of the Prime Minister. Several key players, including Duffy, PMO lawyer Ben Perrin, and Duffy’s lawyer Janice Payne, were kept in the dark about critical information at several junctures in the chronology, including that Wright himself would ultimately write the cheque.

Wright laboured behind the scenes with Senator Irving Gerstein in a wholly improper tactic to doctor an independent Senate audit by outside auditors. His tiny coterie of PMO staffers hammered the Senate’s director of parliamentary affairs into submission as they dictated word for word a Senate committee report exonerating Duffy of impropriety—all for political damage control, of course.

Nothing of these extremely serious breaches of trust by public officials seems to have been addressed by authorities.

While Mike Duffy might have taken double-helpings at the public trough, the record clearly shows that when it came to responding to the ensuing scandal, he was entirely under Wright’s thumb.

Duffy says that from the outset he followed instructions from Senator David Tkachuk in claiming Ottawa as a secondary residence, and that he wouldn’t repay the housing allowance he received without an audit telling him to. Duffy’s biggest fear was that claiming Ottawa as his primary residence would scupper his appointment as senator for PEI. No evidence contradicts this testimony, and the Crown didn't call Tkachuk (or anybody) to disown it.

Duffy's account is further corroborated by an email thread showing that PMO lawyer Ben Perrin believed a constitutional challenge could enmesh not just Duffy, but others too.

For his part, Duffy says he didn’t even know Nigel Wright wrote the cheque, and thought the Conservative Party was managing the financial side of the business. No evidence entered at trial conflicts with any of this.

Nigel Wright on the other hand, was determined to put a stop to the “Chinese water torture” of the unraveling PR disaster.

Senior respected lawyers for the PMO and Duffy then negotiated Duffy's “agreement" to repay (secured under protest and duress). PMO lawyer Ben Perrin testified that while Wright kept key details of the arrangement from him, he would have spoken up had there been any “whiff of criminality” involved.

"The potential for there to be a criminal issue here was never in our minds,” testified Perrin. "We thought we were dealing with a potential violation of a Senate rule."

That evidence should have been the end of the bribery counts right there.

A key element in the bribery count, as in almost every serious criminal charge, is mens rea. In a nutshell, mens rea is the intent to commit a crime. The Crown must prove that Duffy intended to engage in a corrupt criminal enterprise in accepting money from Nigel Wright.

And Ben Perrin wasn’t just some gussied-up notary public. He was lawyer to the PMO, senior policy advisor to the Department of Justice, a former law clerk to the Supreme Court of Canada, a former intern at the International Criminal Court at The Hague, and now a professor of law at UBC.

If the lawyer for the Prime Minister of Canada didn’t know a fully lawyered-up plan was a corrupt criminal enterprise, how was Mike Duffy, former CTV journalist, supposed to? Ben Perrin, the Crown's own witness, sealed Duffy's acquittal last August.

There's been no evidence that, once the PMO settled on its damage control plan, Duffy was anything more than a noisy pawn in Nigel Wright's game. Certainly nothing that even approaches the criminal standard of proof beyond a reasonable doubt. Trying and convicting Duffy alone for this scheme, which potentially carries a severe prison sentence, is so arbitrary and manifestly unfair that it fails the Charter's requirement of fundamental justice.

Yet the Crown soldiered on, past the election and into the fall and winter, its now-hopeless bribery case dead in the water. Part of me will always wonder if the Crown always harboured (consciously or unconsciously) a death-wish for this trial. On Thursday, they just quit. There might yet be convictions on the minor criminal charges, but this baby's done.

The Crown's goose is cooked.