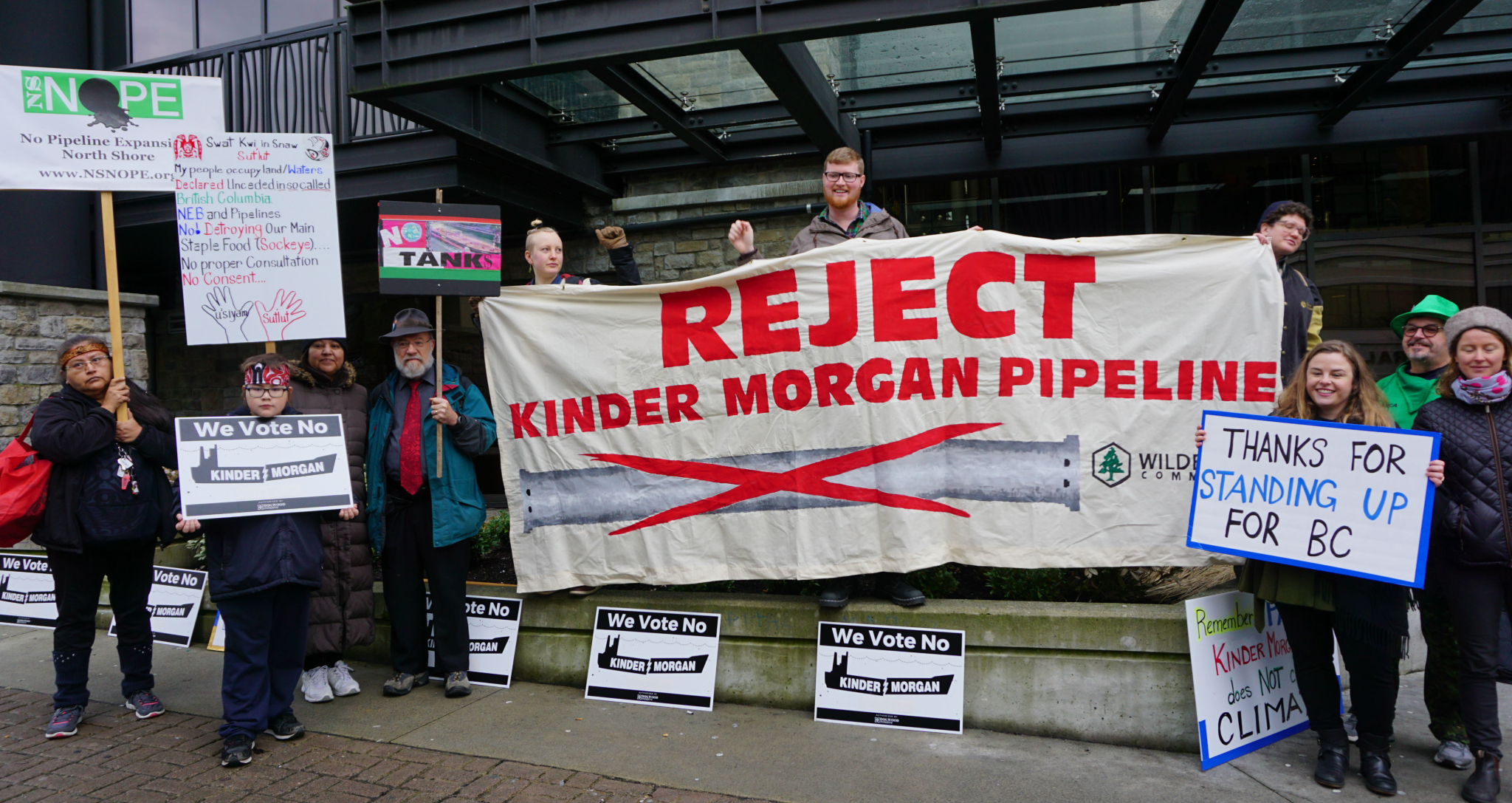 Protesters give a resounding "no" to the Kinder Morgan Trans Mountain expansion project outside the National Energy Board hearings in Burnaby, B.C. on Tues. Jan. 19, 2016. Photo by Elizabeth McSheffrey.
Previous story
Next story

The National Energy Board (NEB) has barely begun its hearings on the controversial Kinder Morgan Trans Mountain pipeline expansion, and already, the message from interveners and protesters alike is a resounding "no."

Demonstrators outside the Delta Hotel and Conference Centre in Burnaby, B.C., where the existing pipeline currently ends, spared no time at all in sharing with the media their thoughts on the Texas oil giant's pipeline proposal.

"These pipelines and these tankers have the potential to impact the place where we live, the place we call home," said Carleen Thomas of the Sacred Trust Initiative for the Tsleil-Waututh Nation. "We want our voices heard, we have a right to have our voices heard."

If approved by the federal cabinet, the Trans Mountain expansion would add roughly 980 kilometres of brand new pipeline to a system that already transports 300,000 barrels per day of crude oil and refined petroleum from the oil sands in Alberta to refineries and marketing terminals in Vancouver and Washington State.

"In the two weeks of these hearings in Burnaby, 50 of the 55 people testifying are opposed to this pipeline," Karen Mahon, director of ForestEthics, told reporters. "Three are reserving comment and two support it, so over 90 per cent of the nations and organizations testifying at these NEB hearings are opposing this project. Yet there is every belief that the NEB will go ahead and approve this pipeline.

"This process is a sham and we have to make sure this pipeline will not be built."

WATCH: A message from the protesters

Protesters got straight to the point on the morning of the first NEB hearing in Burnaby, B.C. examining Kinder Morgan's controversial Trans Mountain pipeline expansion. Video by Elizabeth McSheffrey.

Under its 'real change' election campaign in 2015, the Liberal Party promised to "make environmental assessments credible again" with an overhaul of the NEB. The government has yet to make an announcement however, on how the process will change, despite large pipeline projects like the Trans Mountain expansion currently under review.

"There's an irony in letting this process unfold while promising 'real change' and to overhaul the process because the later you wait, the harder it's going to be to get back the kind of trust that's going to allow a process to unfold constructively," criticized Kai Nagata, Dogwood Initiative. "The promise is on the verge of being broken."

A bad deal for municipalities

The City of Surrey added its voice to the chorus as the first intervener of the proceedings. It said the NEB regulators have "fallen asleep at the wheel," and their failure to address existing problems with the current Trans Mountain pipeline has left municipalities and the province "hemorrhaging money."

"Municipalities and others whose utilities are impacted, and who have jurisdiction over highways will incur present and future costs as a consequence of the pipeline," explained assistant city solicitor for Surrey Anthony Capuccinello. "These costs were quantified over a 50-year period and were estimated to exceed $93 million dollars."

Capuccinello addressed municipalities in the Vancouver Lower Mainland in particular, including Langley, Coquitlam, Burnaby, and Abbotsford. The issue comes from a section of the National Energy Board Pipeline Crossing Regulations, he explained, which states that "any structure" being constructed or installed over pipelines requires "written permission from the pipeline company."

He pleaded with the NEB not to approve the pipeline expansion, and if it did, with provisions that address these financial concerns. Other municipalities scheduled to speak at the hearings include the cities of Vancouver, Burnaby, North Vancouver, Port Moody, and Victoria, all of which are opposed to the project.