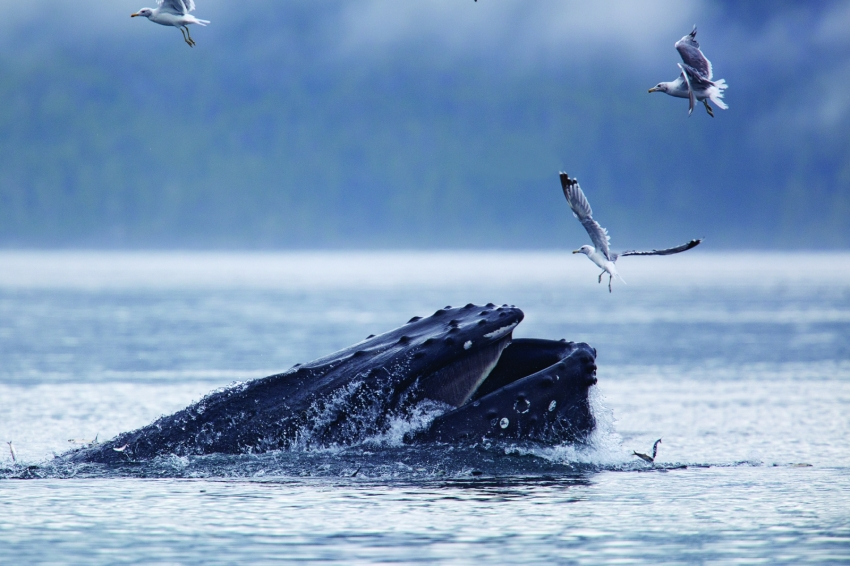 “Their conclusions are fraught with an unacceptable degree of uncertainty, are not supported by the scientific literature, and often not supported by their own information,” asserts the executive summary of the report from the British Columbia-based Raincoast Conservation Foundation.

Titled Our Threatened Coast: Nature and Shared Benefits in the Salish Sea, the report shows an oil spill of diluted bitumen would have devastating consequences for the region’s wildlife and coastal tourism.

The report contends a large oil spill near Turn Point at the northern end of Haro Strait - which separates Vancouver Island and the B.C. Gulf Islands from Washington State’s San Juan Islands - has a 95 per cent chance of reaching killer whales if they are anywhere near the area at the time.

A 60 per cent chance exists of oil contamination on the surface within a 3,800 kilometre centred on Haro Strait after a spill at Turn Point. The report notes that Haro Strait is one of the most routinely traveled areas in the Salish Sea for resident killer whales.

The report cited a City of Vancouver estimate that the economic impact of a large oil spill in the city’s Burrard Inlet could exceed $2-billion.

Ali Hounsell, a spokesperson with Kinder Morgan’s Trans Mountain Expansion Project, told National Observer: “Trans Mountain has been diligent in assessing risks posed by oil tankers in a comprehensive manner and developed and proposed a number of risk control measures to mitigate such risks.”

The report defines the Salish Sea as one of the world’s largest coastal seas, spanning from the western entrance of the Juan de Fuca Strait to the top of Georgia Strait and bottom of Puget Sound.

The name reflects and honours the Coast Salish, the areas’s first human inhabitants.

“We really need to look at the real value of this place,” said Ross Dixon, a program manager at Raincoast and a co-author of the report with Raincoast biologist Misty MacDuffee.

“Everyone is making decisions on Kinder Morgan and all these other proposals, the shipping of fossil fuels through the region, and we don’t really understand the true value of this place.”

Dixon said bird watching along draws in millions of dollars into the region. The Salish Sea whale watching sector has annual revenues of between $17 and $24 million.

Dixon said billions of dollars of value come from the Salish Sea’s eco-tourism and tourism sectors.

The Puget Sound region alone generates $3-billion in spending on nature tourism alone, according to the report.

While Raincoast is an intervenor at the NEB hearings over the Kinder Morgan pipeline extension, Dixon said the report itself - which took over two years to compile and is 112 pages in length - will not be tabled.

Rather the report is meant to serve a different purpose.

“Our hope is if more people can really understand how connected to this place they are, not just economically but in terms of their environmental connections, their social connections that they benefit from this environment, then we’ll stand a much better chance of being able to protect it,” Dixon said.

Dixon noted that as well the report and its authors look toward the Indigenous communities in the region for understanding “as to how we really value our connections to place.”

Among the examples cited in the report is the Tsleil-Waututh Nation - the People of the Inlet - whom the report says have acted as stewards of their rivers, streams, forests and beaches with an “over-arching obligation to ancestors and future generations alike.”

The report notes that those obligations form the basis for the nation’s Sacred Trust Initiative, which is sanctioned by the Tsleil-Waututh chief and council and specifically developed to stop the Kinder Morgan Trans Mountain pipeline project.

Carleen Thomas of the Scared Trust Initiative told National Observer: “Our ancestors have taken care of this home place for us for millennia and so it is our sacred obligation to continue that work.