By Elizabeth McSheffrey | News, Energy | January 22nd 2016
#9 of 2037 articles from the Special Report: Reports from the Race to a Safer World 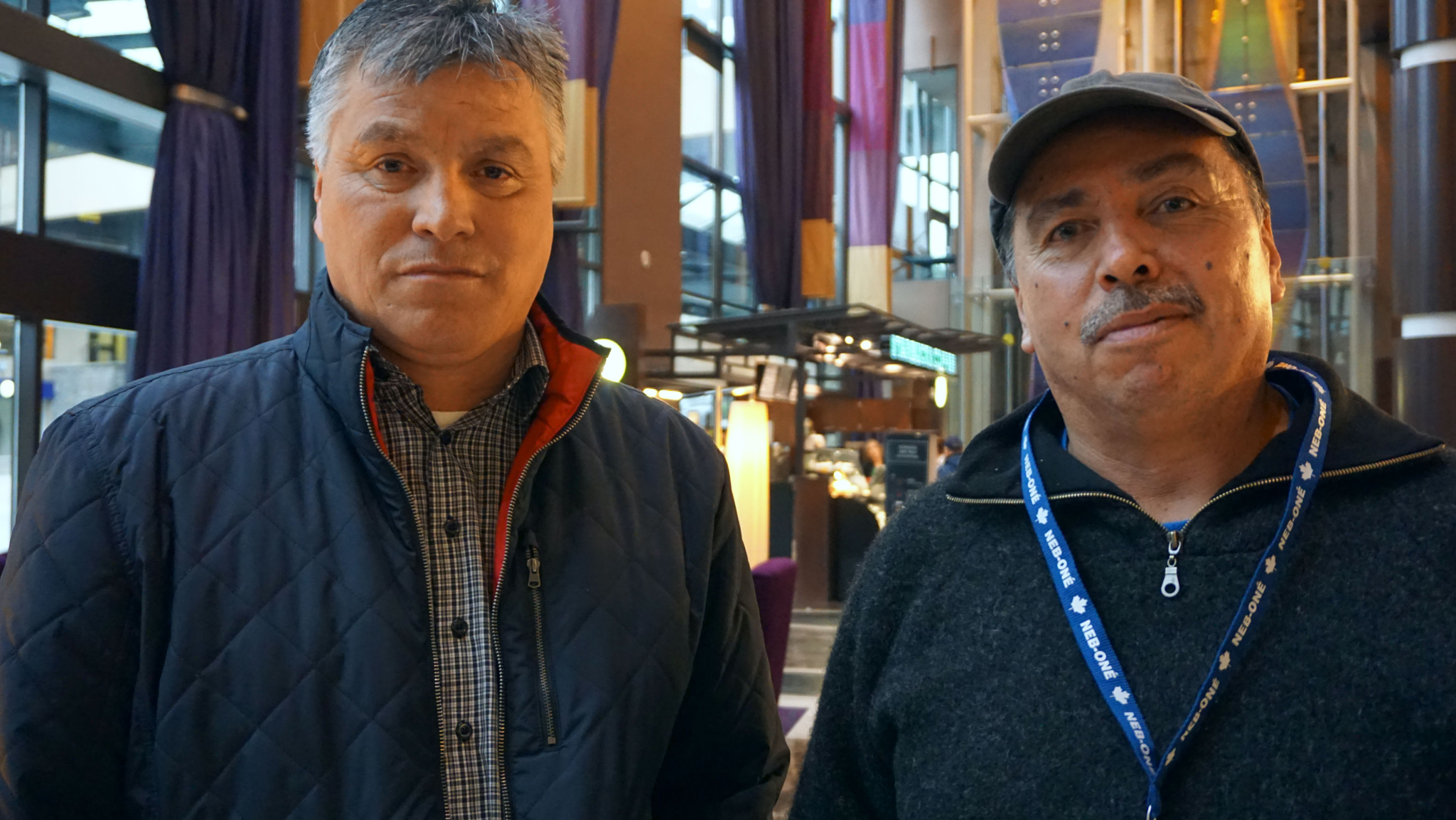 Lummi Indian Nation members Dana Wilson and Troy Olsen travelled from their reserve Washington to protest the contentious Kinder Morgan Trans Mountain pipeline expansion. They were hoping to bear witness to the National Energy Board (NEB) proceedings on the project as well, but only one of them could get into the hearing room as the 'plus one' of an intervener.

"We’re here because we care about our future, the seven generations to come," said Olsen after attorney Kristen Boyles presented on behalf of Coast Salish nations in Washington, including the Swinomish, Tulalip, Suquamish, and Lummi.

Their communities are spread from as far south in the western state as Seattle and as far north as Bellingham, less than 40 kilometres from the B.C. border.

"I believe that Canada fully endorsed the UN Declaration on the Rights of Indigenous Peoples. We are Indigenous people too, so those human rights affect us," he continued.

"As a member of the Lummi Nation, my question for Canada is, will they honour those Indigenous rights?”

Threat to livelihood below the border

The Trans Mountain pipeline expansion is a proposal to add 987 kilometres of brand new pipeline to an existing system that transports 300,000 barrels of refined petroleum and crude oil from the tar sands in Alberta to refineries and terminals in Vancouver and Washington. If approved, the expansion would triple this system's capacity and, more importantly to the U.S. Coast Salish nations, send tanker traffic in the Salish Sea skyrocketing.

"The increase from this project is a seven-fold increase," Boyles told National Observer. "We’ll go from five oil tankers going through tribal fishing grounds a month to 37 in the Salish Sea, around the San Juan Islands, and the Canadian George Islands."

If the pipeline expansion is constructed, she said, the risk of one of these tankers colliding with a commercial fishing vessels would increase by roughly 25 per cent. For fisherman like Wilson — whose father and grandfather were also fisherman — this poses a major problem.

"You’re just a spec out there as a small fishing boat, compared to those huge tankers. It takes them a mile or so to even stop, so you have to start contacting them 10 miles away from where you’re at."

The safety risk is enormous, he said, as is the threat the project poses to the marine wildlife he relies on to earn a living. Wilson catches salmon, halibut, crabs and prawns in his family's small fishing boat and is teaching his son to do the same.

Even a small oil spill of diluted bitumen, which studies have shown is nearly impossible to clean up once it sinks in water, could compromise these vital commercial species.

"I don’t have to read about it, I live it," he said. "That’s why I think the tribe’s voice is so important in this, because they’re living it. Their children are going to live it."

He then pulled out his phone and showed National Observer a photo of his son, standing on a fishing vessel, facing a tanker near their home as proof this his child already lives it.

A duty to consult

Prior to the American Coast Salish nations participating in the NEB process as interveners, Boyles said Trans Mountain did not consult them once through the course of its stakeholder engagement in Canada. During oral arguments before the panel, she called the company "blind" to the impact its expansion would have on Indigenous people below the border.

"'The U.S. tribes are not Aboriginal people of Canada, so it has to do nothing further,'" she said, describing Trans Mountain's position on U.S. consultation. "Failing to consider impacts on the other side of the border matters."

Speaking with panelists, Boyles called the Salish Sea, its wildlife and resources the "economic and cultural life blood" of the tribes, and accused Trans Mountain of "callousness" with its responses to American Indigenous inquiries about the project's impact to tanker traffic in the U.S. Speaking with National Observer afterwards however, she called the entire affair "indefensible."

"It has been astonishing how little conversations have gone on between Trans Mountain and the interests of the United States, the tribal interests especially," she explained.

"Overall, when you look at the record and the impacts that are bound to happen to U.S. waters, it is unbelievable that this process goes forward without a much, much greater attention paid to these shared resources."

Olsen however, was less surprised given the histories of Canada and the U.S. as colonizing nations:

"Our world views have never been appreciated," he said simply.

In her presentation, Boyles also presented panelists with the challenge that Canada, as a signatory to the UN Declaration on the Rights of Indigenous Peoples and through its own environmental and constitutional commitments, has a duty to respect the rights of all Indigenous people, regardless of the border separating it from the U.S.

Basic human rights include the right to subsistence and culture, she argued, and if Canada approves a project that impacts these rights, it is not a decision to be taken lightly.

"Transboundary effects are not to be ignored," she told National Observer. "For United States tribes who have lived on this land since time immemorial, this project is all wish and no reward."​

To Olsen and Wilson however, the division between Canada and the U.S. shouldn't really been there in the first place.

"We’re only separated by an international boundary that the Canadian and United States government didn’t consult the Indigenous people on [drawing] since time immemorial," said Olsen.

"We’re 10 miles from the Canadian border," Wilson agreed. "Before that border was there we were all one tribe — the same songs, the same dances, the same language is spoken."

They showed National Observer one last photo before departing the hearing site in Burnaby to the cheers and thanks of anti-Kinder Morgan protesters outside the building: a Lummi elder sitting on the coast of the Salish Sea with B.C. visible on the horizon.

"Anything that happens from the Fraser River down below is going to affect us," said Wilson, "and just because that border is there doesn’t mean it won’t."

By Elizabeth McSheffrey | News, Energy | January 20th 2016
Reports from the Race to a Safer World

By Elizabeth McSheffrey | News, Energy | January 19th 2016
Reports from the Race to a Safer World