Paris changed everything, so why are we still talking pipelines?

By David Suzuki | Opinion, Energy | January 26th 2016
#14 of 15 articles from the Special Report: The Climate Innovator Next Door 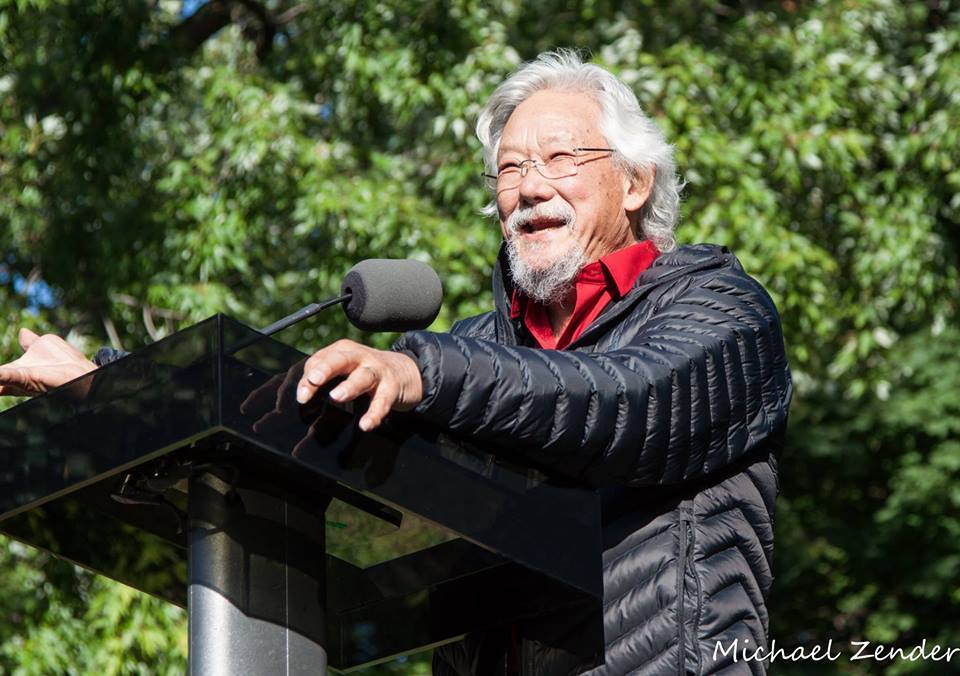 With the December Paris climate agreement, leaders and experts from around the world showed that they overwhelmingly accept that human-caused climate change is real and, because the world has continued to increase fossil fuel use, the need to curb and reduce emissions is urgent.

In light of this, I don’t get the current brouhaha over Kinder Morgan, Keystone XL, Northern Gateway or the Energy East pipelines. Why are politicians contemplating spending billions on pipelines when the Paris commitment means that 75 to 80 per cent of known fossil fuel deposits must be left in the ground?

Didn’t our prime minister, with provincial and territorial premiers, mayors and representatives from non-profit organizations, parade before the media to announce Canada now takes climate change seriously? I joined millions of Canadians who felt an oppressive weight had lifted and cheered mightily to hear that our country committed to keeping emissions at levels that would ensure the world doesn’t heat by more than 1.5 degrees Celsius by the end of this century. With the global average temperature already one degree higher than pre-industrial levels, a half-degree more leaves no room for business as usual.

The former government’s drive to make Canada a petro-superpower distorted the Canadian economy into greater fossil fuel dependence, with catastrophic consequences when the price of oil collapsed. The lesson should have been learned long ago: Heavy dependence on a single revenue stream like fish, trees, wheat, minerals or even one factory or industry is hazardous if that source suffers a reversal in fortune like resource depletion, unanticipated cost fluctuations or stiff competition.

Coal stocks have already sunk to the floor, so why is there talk of building or expanding coal terminals? Low oil prices have pushed oil sands bitumen toward unprofitability, so why the discussion of expanding this carbon-intensive industry? Fracking is unbelievably unsustainable because of the immense amounts of water used in the process, seismic destabilization and escape of hyper-warming methane from wells. Exploration for new oil deposits — especially in hazardous areas like the deep ocean, the Arctic and the Arctic National Wildlife Refuge and other critical wildlife habitat — should stop immediately.

Pipeline arguments are especially discouraging, with people claiming Quebec is working against the interests of Alberta and Canada because the leadership of the Montreal Metropolitan Community — representing 82 municipalities and nearly half the province’s population — voted overwhelmingly to reject the proposed Energy East pipeline project, which would carry 1.1 million barrels of oil sands bitumen and other oil products from Alberta to refineries and ports in the east. Some have thrown out the anti-democratic and, frankly, anti-Canadian notion that because Quebec has received equalization payments it should shut up about pipeline projects.

National unity is about steering Canada onto a sustainable track and looking out for the interests of all Canadians. Continuing to build fossil fuel infrastructure and locking ourselves into a future of increasing global warming isn’t the way to go about it. Shifting to a 21st century clean-energy economy would create more jobs, unity and prosperity — across Canada and not just in one region — than continuing to rely on a polluting, climate-altering sunset industry. Leaders in Quebec should be commended for taking a strong stand for the environment and climate — and for all of Canada.

The Paris target means we have to rethink everything. Energy is at the heart of modern society, but we have to get off fossil fuels. Should we expand airports when aircraft are the most energy-intensive ways to travel? Why build massive bridges and tunnels when we must transport goods and people differently? The global system in which food travels thousands of kilometres from where it’s grown to where it’s consumed makes no sense in a carbon-constrained world. Agriculture must become more local, so the Peace Valley must serve as the breadbasket of the North rather than a flooded area behind a dam.

The urgency of the need for change demands that we rethink our entire energy potential and the way we live. It makes no sense to continue acting as if we’ve got all the time in the world to get off the path that created the crisis in the first place. That’s the challenge, and for our politicians, it’s a huge task as well as a great opportunity.

David Suzuki is a scientist, broadcaster, author and co-founder of the David Suzuki Foundation.