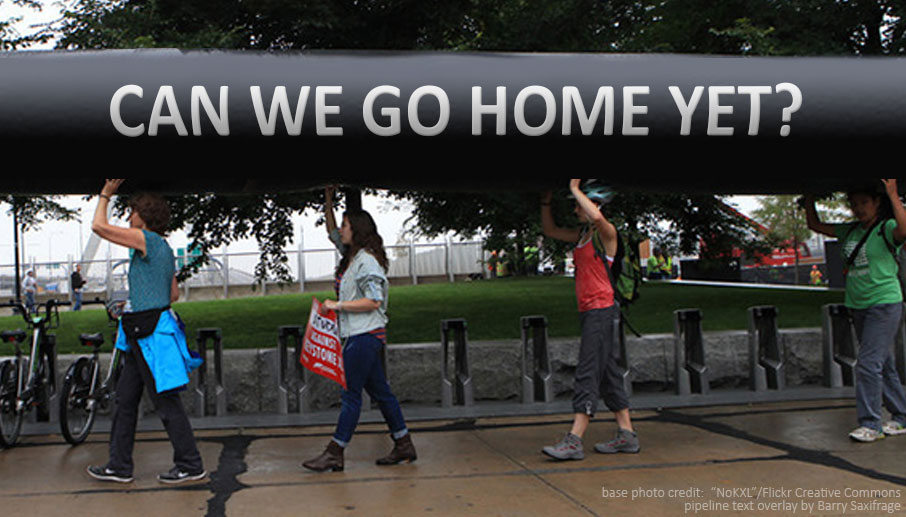 Every year the Canadian Association of Petroleum Producers (CAPP) publishes their "Crude Oil Forecast" report. Unlike most other oil projections, CAPP doesn't run computer models. Instead they ask the oil companies for their actual plans. CAPP aggregates the responses, does some error checking, and publishes the results. In other words, their report shows what the oil industry says it is planning to do.

Their latest 2015 report contains a number of surprises for me. The biggest one, by far, is the oil industry's slower-growth plans. Under these plans, Canada's oil and bitumen production levels apparently never rise high enough to require more big pipelines. Yeah, wow.

Spoiler alert: You won't find any hint in CAPP's report that big new pipelines might not be needed. Instead, they say all four of the big proposed pipes are required to meet the highest-growth scenario. A marketer's job, after all, is to maximize demand for their product. What they don't discuss is how many pipelines will be needed for the slower-growth plans. I went digging for the answer to that. Here's what I found...

Be sure to note in particular the four biggest and most contentious of the proposed pipes that sit at the top of the stack.

We will be seeing more of these four mega-pipes very soon.

Now let's see how the industry's slower-growth needs stack up. To do that, I've taken a second chart from CAPP's report -- the slower-growth scenario's oil supply -- and placed it on top.

Hmmm. Notice anything sticking up over the top?

These two charts, when overlaid, sure seem to indicate that none of four biggest proposed pipelines are required for the industry's slower-growth scenario. Once again, this isn't a Greenpeace proposal or an economic computer model. These are the industry's own plans and the industry's own charts. Just saying.

Does this mean Canada can avoid the festering and increasingly acrimonious pipeline wars? Have we hit peak oil mega-pipeline? The answer, obviously, depends on whether these slower-growth plans of the oil industry become reality. As I'll discuss in detail below, this looks increasingly likely to be the case.

Which oil is included in the slower-growth scenario?

CAPP says the slower-growth scenario as made up of:

As the combined chart above indicates, all three of these sources can apparently be developed without building any big new pipeline.

Slower-growth is still lots of growth

As the chart also shows, "slower-growth" is definitely not "no-growth". In fact, bitumen production surges another one third above current levels in this scenario. That's because all the currently "in construction" projects will eventually come on line and significantly push up bitumen extraction levels.

Perhaps the biggest headwind of all for the slower-growth plans will be the resulting surge in climate pollution.

If bitumen production surges by another third, then its climate pollution could very well too. That would make it extremely unlikely that Canada could meet its 2020 or 2030 climate targets. And vice versa. Any significant effort to meet Canada's climate obligations would make the tar sands slower-growth plans much harder to pull off.

Similarly, in this article I'll use the industry's current overall emissions-intensity of 0.088 tCO2/barrel when estimating potential future emissions. At that current intensity level, the slower-growth plans would see tar sands emissions of around 95 MtCO2 per year by 2030.

That is triple their 2005 pollution levels.

It is also very close to Alberta's promised limit of 100 MtCO2. Not much room left for further expansion under even that generous cap.

Because emissions-intensity can be a confusing issue when it comes to the tar sands, I'll take a minute to explain the recent trend.

First you can see in my chart on the right that despite intense pressure to clean up, the emissions-intensity per barrel of bitumen stopped improving around 2005.

In 2007, Alberta's introduced its first "climate policy" (known to energy geeks as SGER). That policy didn't help either.

All these factors, along with very low oil prices, combine to create real uncertainty about any future improvements. This is why Environment Canada assumes no improvement through 2030 in their emissions projections.

As Federal Environment Minister Catherine McKenna pointed out the other day, Canada is drifting ever farther away from its climate promises and tar sands expansion is causing most of problem.

My next chart on the right shows that under these slower-growth plans the tar sands will require an ever growing chunk of Canada's carbon budget. Their current slice would double to 18 percent by 2030.

A critical thing to realize about this scenario is that total tar sands emissions would actually be flat, or even slightly decrease, from around 2020. And yet, their slice of the nation's carbon budget would continue rising through 2030 and beyond. Why? Because the nation's carbon budget needs to keep shrinking year after year. All the way down to zero. Keeping emissions flat isn't a climate solution. It might sound good, but the result is climate failure. Emissions have to fall over time.

The Globe and Mail recently joined the climate reality parade with a blunt editorial:

"You weren’t really supposed to know this, but Canada is rapidly drifting away from its greenhouse gas emissions targets – targets that weren’t all that ambitious to begin with. It is now clearer than ever that, if the Trudeau government plans to meet those modest targets, it will have to take drastic action in the next four years and be willing to inflict some pain on Canadians.

… GHG emissions from the oil sands, for instance, will amount to half the increase in total emissions between now and 2030 …

It’s put-up or shut-up time. Canada must finally meet its targets, while growing the economy at the same time."

Pulling a rabbit out of the hat

Even if the tar sands industry pulls an emissions rabbit out of the hat and finds a way to expand by another third … they still apparently won't require another big pipeline to do it.

Show me the money!

Oh, and that part in the Globe and Mail about "must finally meet its targets, while growing the economy at the same time"? That is really going to be impossible if tar sands don't cut emissions.

Here's why. To meet our 2030 climate target while also maintaining our standard of living ($GDP/capita) our economy must produce around $4,000 per tonne of climate pollution in 2030. It only produces $2,200 now. We have a lot of work to do!

Alberta's Oil and Gas industry creates a lot of wealth and jobs. Unfortunately, they produce very little of either one per tonne of climate pollution.

The fact that our nation's fastest growing source of emissions -- Alberta's Oil & Gas industry -- produces only around $400 in GDP per tCO2 today is a serious problem. It is ten times less than needed. The same ratio is true when it comes to jobs.

As I'll cover in detail in another article soon, if Canadians hand over a quarter of our 2030 carbon budget to an industry that produces so little wealth per tonne, and so few jobs per tonne, we will fail badly at either meeting our climate commitment or maintaining our standard of living. Or both.

If we want to meet both challenges the Globe and Mail set out, then the economic sectors with the lowest productivity per tonne can't keep grabbing a bigger and bigger slice of the carbon pie.

Once Canada actually gets serious about cutting emissions, then the blunt economic reality of their low-productivity per tonne will pile even greater pressure on tar sands to cut emissions. Expanding production while cutting emissions will be very challenging to say the least.

Tidewater pricing argument for pipelines ebbs away too

Canada's oil industry has long argued that, in addition to capacity, new mega-pipelines to tidewater are needed to sell their oil at higher world oil prices. This year's CAPP report emphasizes the need for tidewater pipelines "to serve global markets" and thereby "achieve the maximum value for its resources."

Because of a long-standing US law that forbid oil exports, oil prices in the US market have sometimes been less per barrel than global prices. In recent years the differential reached as high as $25 a barrel at the peaks.

But in December, several months after the CAPP report was published, the US Congress removed the 40-year-old ban on oil exports. And already the discount to world oil prices has evaporated. Today the US oil market is effectively trading at world oil prices. If this holds up over the long run, then the argument that tidewater pipelines are required to get world prices will disappear along with the historical discount.

The scenarios that do require more big pipelines

As I mentioned at the top, CAPP says all four big pipeline are still needed. To reach that conclusion they combined the industry's faster-growth scenario with a big surge of Bakken oil into the system over the next couple years. Let's look at each in turn.

First, here's industry's faster-growth scenario added to the chart as a red line. This includes everything in the slower-growth plans plus additional expansion of tar sands beyond what is already "in construction".

Instead of a plateau, this leads to ever rising production levels that hit 5.23 mbbld by 2030. With the need to mix in condensates to dilute bitumen, the required takeaway capacity rises to 6.06 mbbld.

All the expansion comes from the tar sands. Their production would reach 4 mbbld by 2030 -- nearly double current levels. From a climate perspective, this is a million barrels more per day in 2030 than the International Energy Agency estimated was compatible with a +2C energy scenario (2010 WEO).

Here are some sobering numbers on the size of the resulting climate pollution surge (again at current emissions-intensity):

Finally, here is the full scenario CAPP used when saying all four proposed mega-pipes are required. This scenario is shown as the dark red line on the chart below.

This maximum-pipeline scenario includes the Canadian oil industry's faster-growth plans plus a huge slug of American Bakken oil arriving into the pipelines between 2016 and 2018 and staying there. With the addition of this Bakken surge the supply line manages to touch all four of the big proposed pipes.

I'm certainly not an expert on Bakken. My best guess is that the Bakken surge represents their negotiated share on the USA side of the proposed Keystone XL pipeline. Bakken was planning to grab a sizable share of KXL at the time. If so, then the Bakken surge may have evaporated from the Canadian pipeline discussion along with that pipeline's rejection.

In addition, the world's increasing efforts to prevent the global climate crisis from escalating beyond +2C promise to impose both stricter climate pollution limits and long-term low oil prices. This combo would further challenge the ability of the tar sands to expand beyond their "slower-growth" scenario.

It is far from certain at this point that the tar sands will find a way to expand bitumen extraction to the levels that would require another mega-pipeline. Canada's pipeline wars may be ending sooner -- and with less national division and trauma -- than expected.