I volunteered in Calais refugee 'jungle' and here's what I discovered 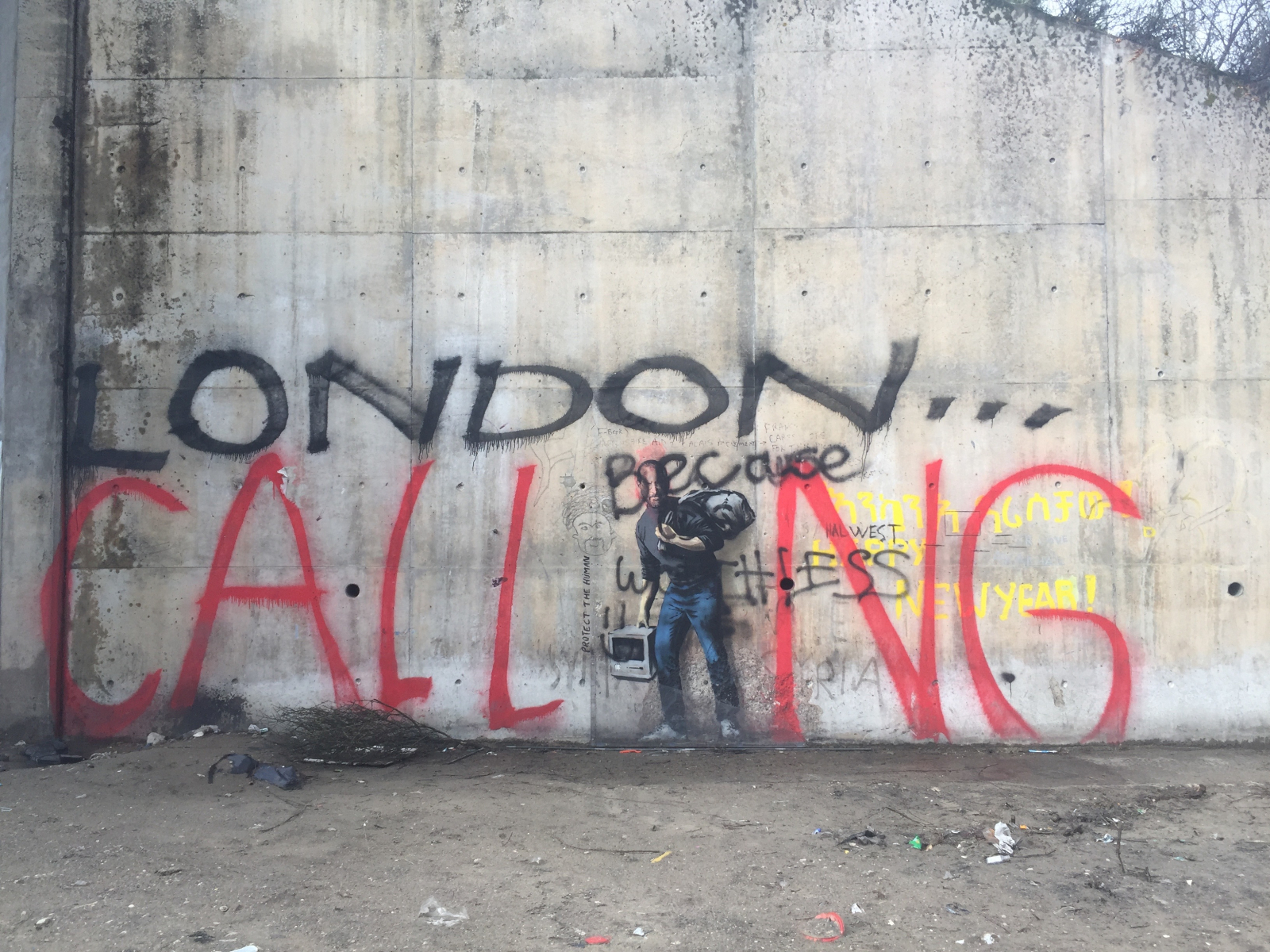 The Englishman at the table adjacent sings slowly and quietly to calm his rambunctious children. “Some is rich. Some is poor”, he coos the clash. The clairvoyance, with which his rhyme rings true, is strikingly discordant.

Sitting in a café in the city center among the English tourists and the beautiful landmarks, I am able to see no indication that a ten-minute drive from Calais’ clean, safe streets is Europe’s largest refugee camp. No one is talking about the recent French announcement to evict 3000 refugees and bulldoze half the camp. No one is talking about the plight of men, women, and children living in squalor 10km away.

The difference between the immaculate city and its sprawling sub-city is stark.

I spend the day sifting through bags of youth donations, instructed to keep only what we would deem suitable enough to clothe our own children in, the threshold is high. The work is fast-paced, set to upbeat music and spirits reflect the same mood.

One man in his fifties drives three hours from Belgium to Calais twice a week in between shifts at his day job, to volunteer in the warehouse and take loads of refugees’ washing to do at home. Another volunteer is a self-described wanderer, who has taken up residence with a Calaisiens family, and works at night renovating their house, to be able to work during the day at the camp. Another, a young woman, came to volunteer during her 3rd and final year of university, but after being so compelled by the work of the volunteers and the lives of the refugees, has yet to return after months of living on site.

Despite the ever-present news of a far-right objection to refugees, counterbalance exists in the form of volunteers who could otherwise live, wholly unaffected by the crisis. They sift through donations, make food, provide first aid, emotional and educational support, and connect with refugees, providing a vital lifeline to the Jungle.

After a long day’s work we retire to a popular restaurant run by refugees in the jungle. We walk through the heavily police-guarded front gates, and my heart stops as I am confronted by the jungle. Tears well up in my eyes and a fellow volunteer looks at me, and empathetically says 'not here...don't cry here, its hard enough for the refugees'. We walk along the main street made of rubble, and strewn with litter. Cafés, corner stores, and restaurants line the street, and friendly shop owners wave and smile from within their makeshift, plastic windows. Men walk by, gracing us with smiles of acknowledgment, and boys my age share welcoming waves. My shock is paralyzing and renders me silent. With happy faces, and the amenities of a functioning society, the jungle is so unlike what I expected.

It’s dark, rainy, and we dodge ponds of mud, but as we near each restaurant the smell of onions and garlic fills the cool night air. Any uninformed scepticism I had about eating a meal cooked by refugees has vanished. The Three Idiots serves large portions of basmati rice with dried fruit and nuts, a huge leg of crispy, spiced chicken, a side of boiled spinach, fresh naan bread, and sweet chai tea, all for €8. Despite being built from tarps and wood planks, the atmosphere is bright and colourful, and the restaurant is impeccably clean.

The sound of hail hitting the tarp ceiling is drowned out by J-Lo music videos on the television, and soon, through the intoxicating smell of food, and the warm smoky air filled with perfumed shisha, the shock of the camp melts away and the easy comfort of the restaurant makes me forget where I am. Gulsher, the restaurant owner and refugee himself, is a formidable host. He teaches us words in Urdu and the conversation stays light, talking about our ethnicities, and the food. We avoid conversation about his travels to France, the camp, and the impending eviction, but I can’t help but wonder, will this restaurant be another one of the merciless casualties of France’s haphazard bulldozing?

The motorway used by tourists and locals to access Calais’ ferry-port is lined by a ten-foot barbed wire fence, with police cars on patrol every mile. Beyond the UK-funded £7,000,000 fence, is a man-made sand dune that attempts to conceal the sprawling sub-city. So unlike its clean and empty matriarch, the sub-city is made up of winding mud roads covered in litter. Calais’ disowned offspring is condemned for flaws inherent and inevitable to it. Punished for fleeing their war-ravaged cities in their home-countries, Jungle residents fight to arrive in a land of hope, where they’re cursed by governmental antagonisation and xenophobic hatred from their neighbours to suffer relegation to an inferior class of non-citizens.

Strong seaside winds test the craftsmanship of each shelter as she pulls at every rip and crevice, in league with hail who raps on un-insulated doors and tarp roofs to leak her way in. And yet, men and young children walk on by, along the makeshift “Main Street” with smiling faces, waving, and asking volunteers how we’re doing. The humanity and kindness in their faces is compassionate and grateful to have allies.

On cold days like this people find solace in one of the many communal areas in the Jungle. With an economic trading system run on the Euro, the jungle offers all the amenities of an average city; a few cafés, an assortment of Kurdish, Ethiopian, and Syrian restaurants, a church, a mosque, a barbershop, an abundance of corner grocery stores, and the “Jungle Books” classroom where children and adults practice their English skills and prepare hopefully for Asylum interviews.

Volunteers and refugees mill along the makeshift dirt roads within the barbed wire Jungle-city limits, exchanging wide smiles and often stopping to talk, the refugees eager to practice their English skills, the volunteers eager to listen to stories. I watch the friendly exchanges take place until I realize I can’t tell volunteer apart from refugee. Dressed equally well, looking equally ethnically ambiguous, it hits me that our similarities run deeper than appearances. Most refugees are well educated with valid qualifications, and many have abandoned wealth to seek a stable life in a safer country.

An Us and Them differentiation simply does not exist.

With no organized rubbish system, there is little other choice for refugees to dispose of waste. Endless hills of trash make for dismal scenery. I spend the day standing in the layered mounds of waste upon sand, hand picking rubbish. Our team quickly fills up dozens of bags and the result of our hard work is astonishingly satisfactory.

We’ve attracted a small crowd of grateful refugees, and after a few minutes of watching, they proceed to join our efforts, ending up doing the brunt of the work. Through an unspoken agreement, we form an assembly line of workers, alternating volunteer, and refugee.

Our coordinated efforts emphasize my growing awareness of our similarities, and our lack of tangible differences.

My mother was born in Fiji, in a one room, aluminum shack with 3 walls, a dirt floor, and a fire pit in the center of the room. Our family comes from a village that had no electricity or running water, and they lived off the land; all food was either grown or caught. My grandfather traveled out of the village to Suva city and eventually to Australia for work, and my mother and her siblings went to a school where students were not permitted to speak Fijian, in a system that imposed its religious and educational practices in an oppressive environment. It was clear to my grandfather, that the only way to provide a higher education for his children, and to earn a decent living, was to leave their beloved home country.

In 1960 my Grandfather’s eldest brother, Philip, jumped ship from Fiji, and landed on the shores of Vancouver, Canada. He did odd jobs, trying to earn enough money to send for his family. By the whim of fate, as a black man in the sixties, he was able to overcome racism and xenophobia, and eventually earned his keep by working forestry in rural British Columbia.

In 1971 Canadian Prime Minister Pierre Trudeau introduced multiculturalism as an official government policy, and the following highly progressive 1976 Immigration Act opened borders to refugees and families with residents living in Canada. Because my uncle Philip managed the unlikely task of gaining citizenship as an illegal immigrant, the rest of my family, and my mother, were able to move to Canada with $100 in their pocket to survive.

Very quickly, it becomes painfully obvious that there is no difference between me and the refugee boy my age, except timing that granted my immigrant family citizenship in the Western world.

The ugly irony in our Western and European intolerance of refugees, is the fluid, shifting, and continuous nature of migration. As a characteristic inherent to humanity as a whole, it’s the curse of our collectively flawed, short-term memory, which causes us to forget our own ancestors, and antagonize the ethnicity subjected to diaspora in each generation.

Ubiquitous even since the period before written records, traces of human fossils show us that over a million years ago, humanity spread with a mass diaspora from Africa. From the 6th century with the destruction of Jerusalem, the Jews became a nationless people and were forced to migrate across the globe, being then subjected to brutal xenophobia in most of the countries they made home. From the 16th to 19th century, Spanish and Portuguese settlers reduced the Aboriginal populations of South America to an underclass, and Europeans did the same to the First Nations people in North America.

The forced migration of African people to the West as slaves further demonstrates how intolerant those that make up the majority can be to the unfortunate minority. Our ancestral colonizers migrated at one point and stole land, yet in modern times we have the audacity to show intolerance and xenophobia towards those who seek refuge from ruinous conditions.

Who really has claim to land when our ancestors have been migrating since the dawn of our modern species? Today the world represents an amalgamation of different cultures and ethnicities. How are we able to live in fear of unknown people and lands when it should be blindingly obvious that there are no tangible differences between us and migrants, except man-made borders and powerful, paper, passports.