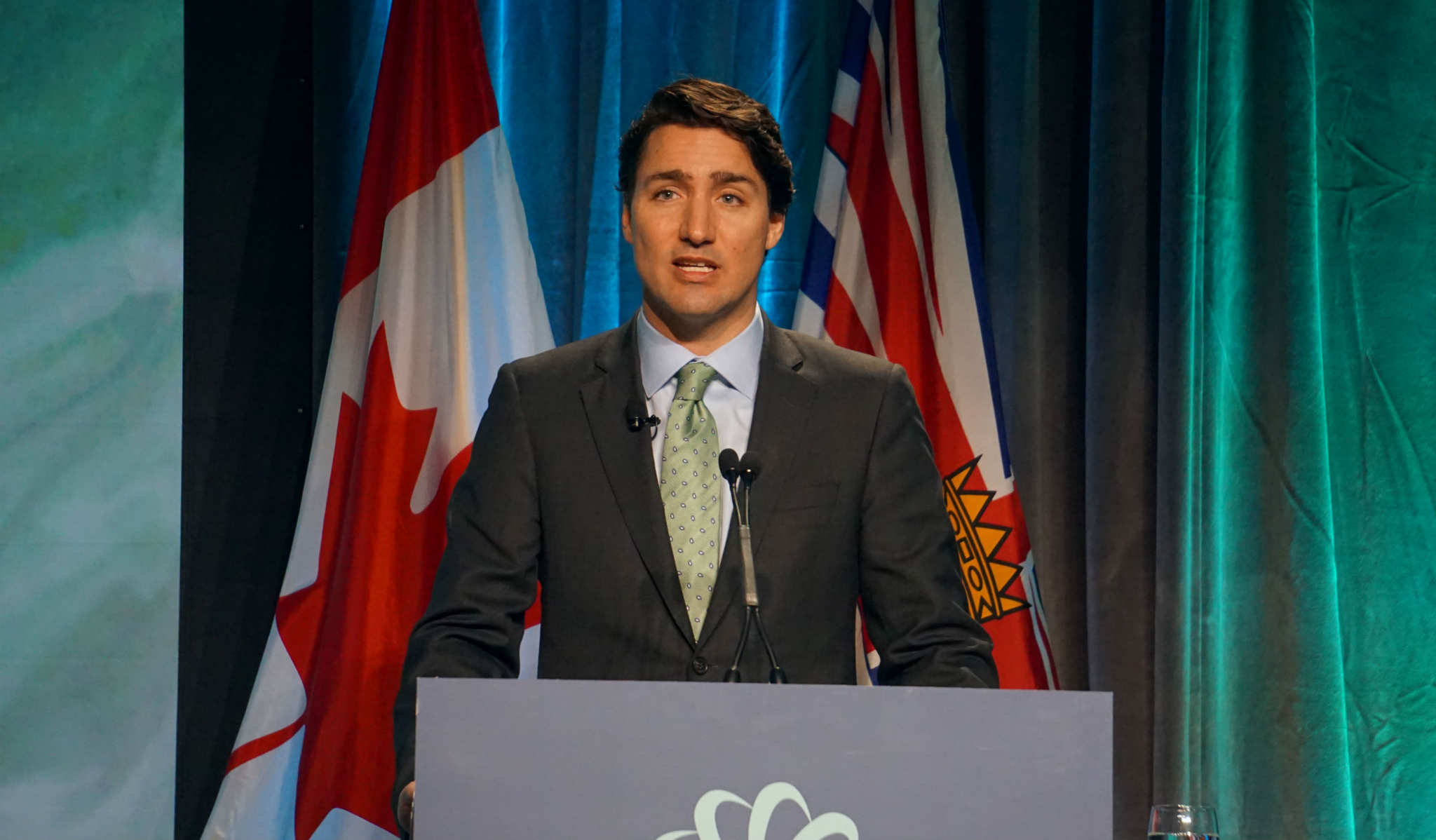 Prime Minister Justin Trudeau opens the Globe Series 2016 in Vancouver, B.C. with a commitment to getting Canada's resources to market on Wed. March 2, 2016. Photo by Elizabeth McSheffrey.
Previous story
Next story

Steadfast in his commitment to getting Canadian oil to market, Prime Minister Justin Trudeau said putting pipelines in the ground will help pay for the country's transition to a greener future.

Opening the Globe 2016 Leadership Summit in Vancouver on Wednesday — which deals with tackling climate change and sustainability in business — the Liberal leader dodged questions about whether building controversial energy projects like the Kinder Morgan Trans Mountain expansion and Energy East pipeline would directly contravene his commitment at COP21 in Paris to keep global warming below two degrees this century.

“We want the low-carbon economy that continues to provide good jobs and great opportunities for all Canadians," he told a crowd of hundreds of business, civil society, and science innovators.

"To get there, we need to make smart strategic investments in clean growth and new infrastructure, but we must also continue to generate wealth from our abundant natural resources to fund this transition to a low-carbon economy.”

The answer however, wasn't enough for Discovery Planet's Daily Planet host Ziya Tong, who had the privilege of grilling him on stage before conference participants. Given the 28,666 oil pipeline leaks that have occurred in the last 37 years, she asked him how he could even consider projects like Energy East while trying to move towards a clean, green future:

“We have hundreds and hundreds of pipelines across this country carrying all sorts of different things," he answered, "and we need to make sure that we’re getting the reassurance of communities, Indigenous people, environmentalists and scientists that we’re doing it responsibly.

"It’s what Canadians expect of their government and industries, and that’s what we’re going to be working very hard to deliver.”

Prominent environmentalist Tzeporah Berman, however, questioned the argument that pipelines are absolutely needed for a strong economy in Canada.

"There is no question we need a strong economy to lead in the low carbon transition — but economically, the oil to tidewater argument is eroding," Berman said. "We need to evaluate infrastructure based on a global market analysis consistent with our country's ambition of ensuring a two degree climate safe world."

The prime minister said Canada doesn't have to make a choice between wind energy and pipeline development — both will be necessary in funding Canada's movement towards a zero-carbon economy.

At a press conference after his presentation, he didn't address reporter concerns about increasing the amount of fossil fuels combusted by expanding development of the oilsands. Instead, he pointed towards other government commitments to clean tech solutions that he said will decrease Canada's reliance on oil and gas.

Part of Canada's pledge to Mission Innovation in Paris, he explained, is to double the government's investment in clean energy research over the next five years.

"Indeed, as we encourage people to by more fuel efficient vehicles, as we invest in public transit and green infrastructure, we are trying to move towards lesser reliance on fossil fuels," he explained. "That’s what the planet requires, and quite frankly, that's what Canadians are expecting of us."

During his presentation, the prime minister further announced $75 million in funding for the Federation of Canadian Municipalities to pay for infrastructure and technology that will combat climate change, and an additional $50 million to improve climate resilience in design guides and building codes across the country.

Trudeau, who was also joined at the launch by cabinet ministers, said collaboration between premiers of "different stripes and different beliefs" will be vital in securing Canada's spot as a leader in climate change action and sustainable energy. He did not specifically address the recent divides created by an injunction sought by the Quebec government on the Energy East pipeline, but congratulated all on standing united in the quest for economic growth and clean energy.

Initiatives to phase out coal power in Ontario and Alberta received a nod, as did carbon pricing in Quebec and British Columbia. Asked if disagreement between premiers — particularly Saskatchewan Premier Brad Wall — on a national carbon pricing scheme is a reflection of his leadership, however, he simply repeated:

“All Canadians across this country, including the premiers, are united in their desire to build a stronger economy that doesn't put at risk our environment, and the steps required to do that will vary across the country. That, and many other issues, is exactly what we are gathered here in Vancouver to talk about.”

The prime minister will meet tomorrow with premiers across the country to discuss collaboration in moving forward with climate change. Keep checking the National Observer for more coverage of the 2016 Globe Series.