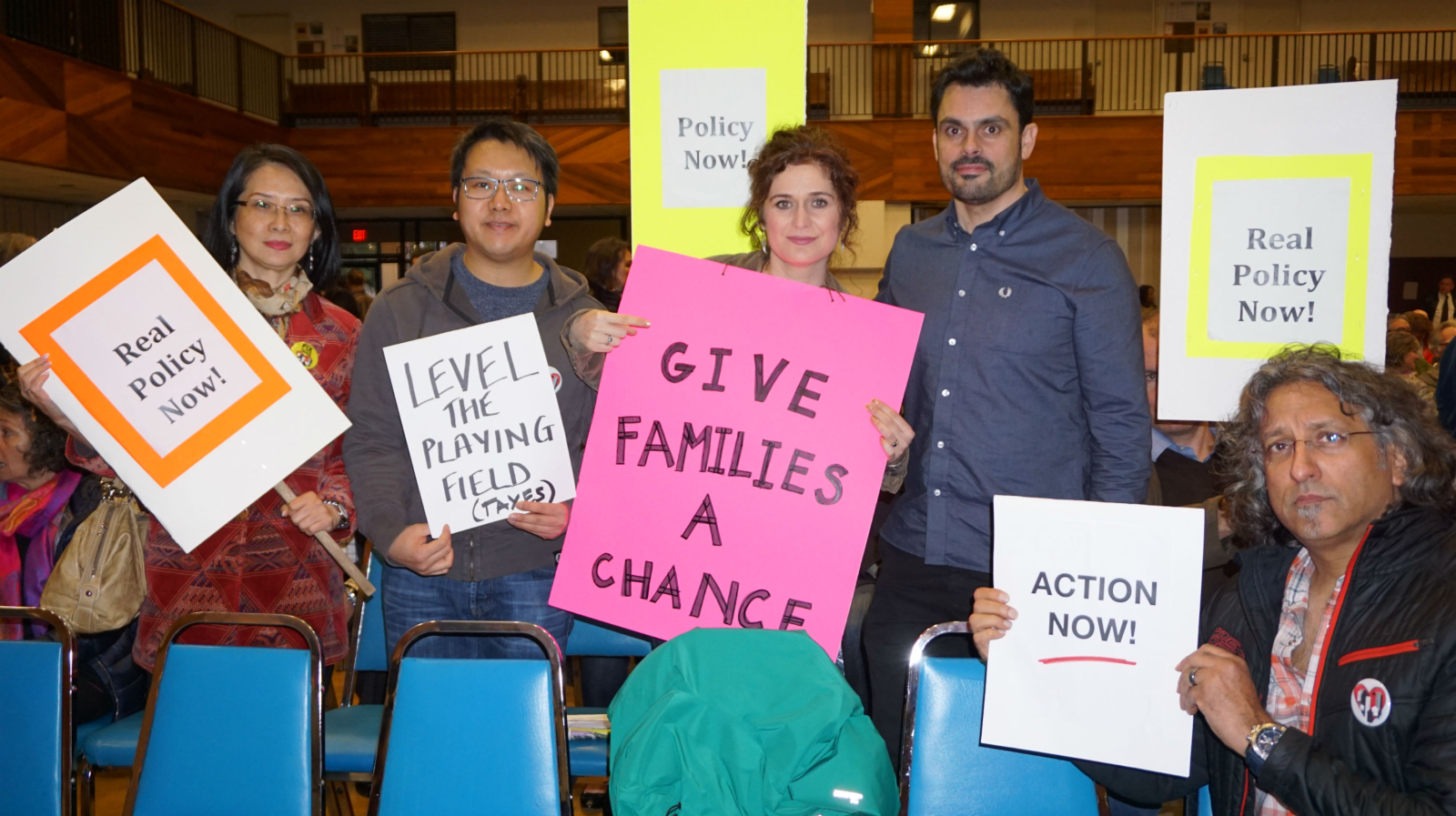 Jennifer Lloyd's voice quivered as she divulged her family's precarious housing scenario in front of nearly 700 strangers at a community meeting in Vancouver on Wednesday.

"My younger child is sleeping in my master bathroom," said the mother of two, gripping the podium tightly.

On the verge of tears, she discouraged everyone from dismissing the city's infamous housing crisis as an issue unique to entitled millennials seeking home ownership, or baby boomers "living high on the hog," unwilling to be proactive about the skyrocketing real estate market. Both Lloyd and her husband have PhDs, and are unable to afford more than a tiny two-bedroom condo.

“This is not a generational issue, this is not a class issue, this is an issue for everybody," she explained. "I want to know that the virtues that I hold dear — hard work, educating ourselves, trying to better our lives — mean something in this city.”

Lloyd's was one of many compelling personal stories heard at the emergency housing town hall, including a 19-year-old student in a wheelchair on her way to a homeless shelter at the end of the month, and a young nurse-to-be suffering from the overbearing power landlords have over tenants in a volatile and expensive rental market. The event was hosted by the BC NDP and led by its housing critic, Vancouver-Point Grey MLA David Eby.

Vancouver's lack of affordable housing has long since been recognized as a crisis, and with a provincial election coming up in spring 2017 that threatens to unseat BC Liberal Premier Christy Clark, the BC NDP seized the opportunity to push forward an affordable housing platform. 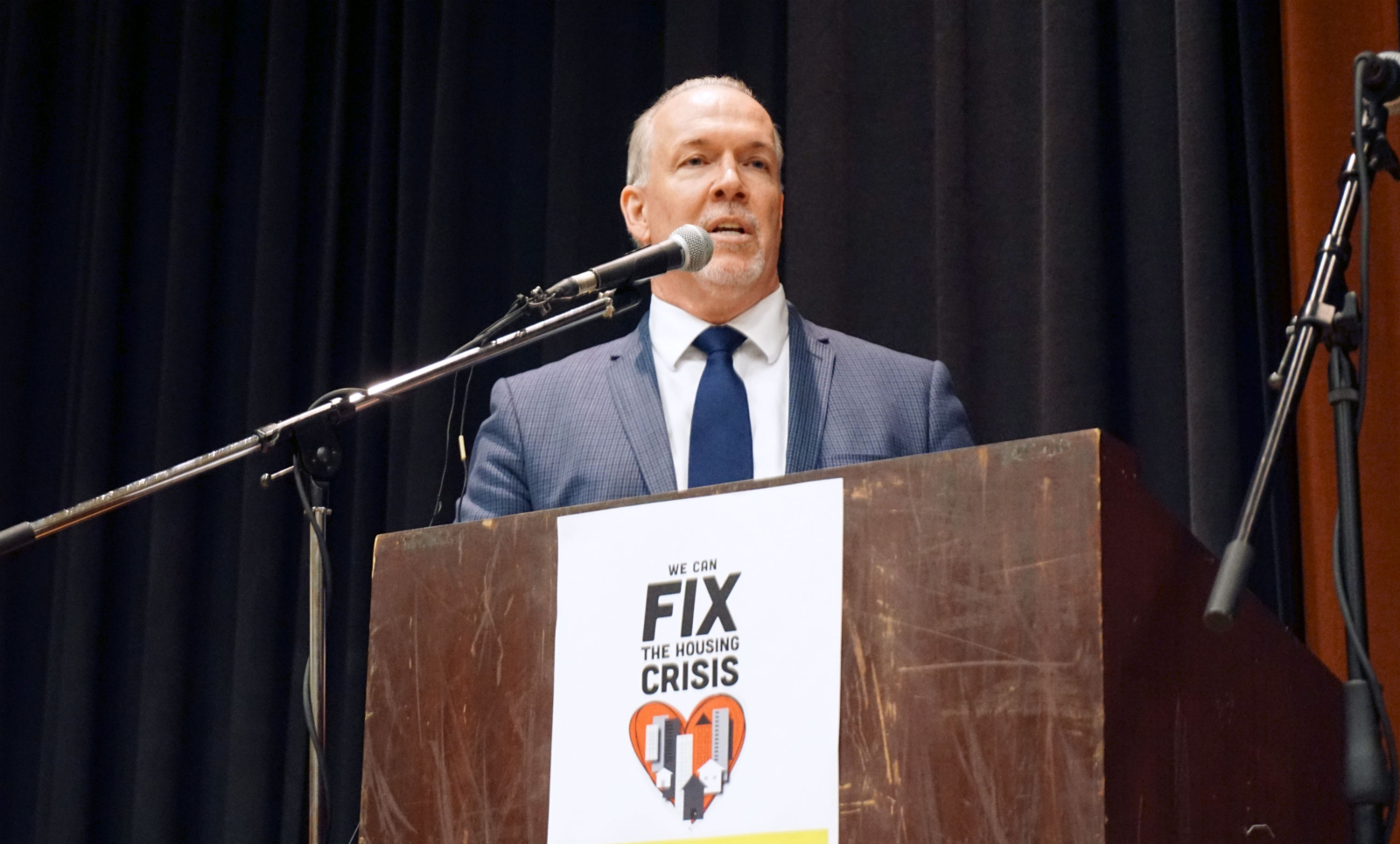 New legislation to combat the crisis

"This is about homes, this is not about safety deposit boxes for the wealthy," said Official Opposition leader John Horgan. "This is about a place for us all to live and call our home.”

The NDP leader committed to introducing two new pieces of legislation in the B.C. legislature on Thursday that would combat Vancouver's affordable housing crisis. The first bill would attempt to close the loopholes on "shadow flipping," which allows realtors and investors to resell a property multiple times before a sale is complete, jacking up the price and profiting from each transfer using assignment clauses in the sales contracts.

“It’s an easy solution, it’s one that the government could do and they’re choosing not to," said Horgan. "We can close those loops by ensuring that any time there’s a transaction, there is a tax paid."

Horgan said revenue from the shadow flipping tax would go into an affordable housing fund rather than the province's general revenue stream, maintaining the "continuum" that makes strong and vibrant communities. The BC NDP's second piece of legislation, he explained, would keep a track record of those buying homes in the province to ensure that offshore buyers are paying a higher tax than those living in B.C. today.

"I can guarantee there will not be one clap from the other side because they want to keep their heads in the sand and continue to ignore this issue,” he said firmly, calling on the federal government to reinstate funding for affordable housing in communities, and work with provincial and municipal governments to combat the housing crisis.

"If we’re going to solve the problems of our time, there’s only one way to do it and that’s together."

The time to act is now, the crowd agreed, before Vancouver's workforce is priced out of town.

According to a 2015 report by Vancity, Vancouver is likely to experience a major shortage of skilled workers in the near future as young people migrate in search of more affordable opportunities. Between 2001 and 2014, the cost of Metro Vancouver housing increased by 63 per cent while salaries rose by only 36.2 per cent, it found.

By 2025, it estimated that 85 of 88 in-demand jobs will be unable to afford to live in Metro Vancouver, and only those individuals working as senior business managers, senior construction managers and engineering managers will be able to maintain affordable housing.

"This excludes every teacher, nurse, firefighter, police officer and even family doctor," said Eveline Xia, founder of the Twitter #donthave1million campaign that brought Vancouver's housing crisis into the national spotlight in 2015. "It seems to me when you have a housing market removed from local incomes, locals are removed as well."

Xia, who has a master's degree in environmental studies, has spent the last year advocating for more affordable housing in the city. She voiced an important observation before Wednesday's audience: many of those who tout Vancouver's global status as justification for its hot water housing situation often compare it to economic hubs like London, Hong Kong, and New York City, but when told that those cities have major legislation to protect affordable housing stock, respond with shock.

"Both London and Hong Kong apply a 15 per cent non-resident buyer tax," she explained. "London recently built 100,000 units of affordable housing for locals, and they did this in three years."

New York further plans to implement an empty condo tax this year, expected to generate $600 million in revenue per year. Even though Vancouver is "late to the game," said Xia, it isn't too late for the government to step up and learn from these successful practices.

"Many will always tell you that intervention in the free market is not acceptable, but what I find unacceptable is touting Vancouver as a 'world class city,' then rejecting any affordable housing measures employed by those very same cities."

Vancouver recently broke ground on a 15-storey building with 135 units of affordable housing in the False Creek neighbourhood that will be operated by a local non-profit.