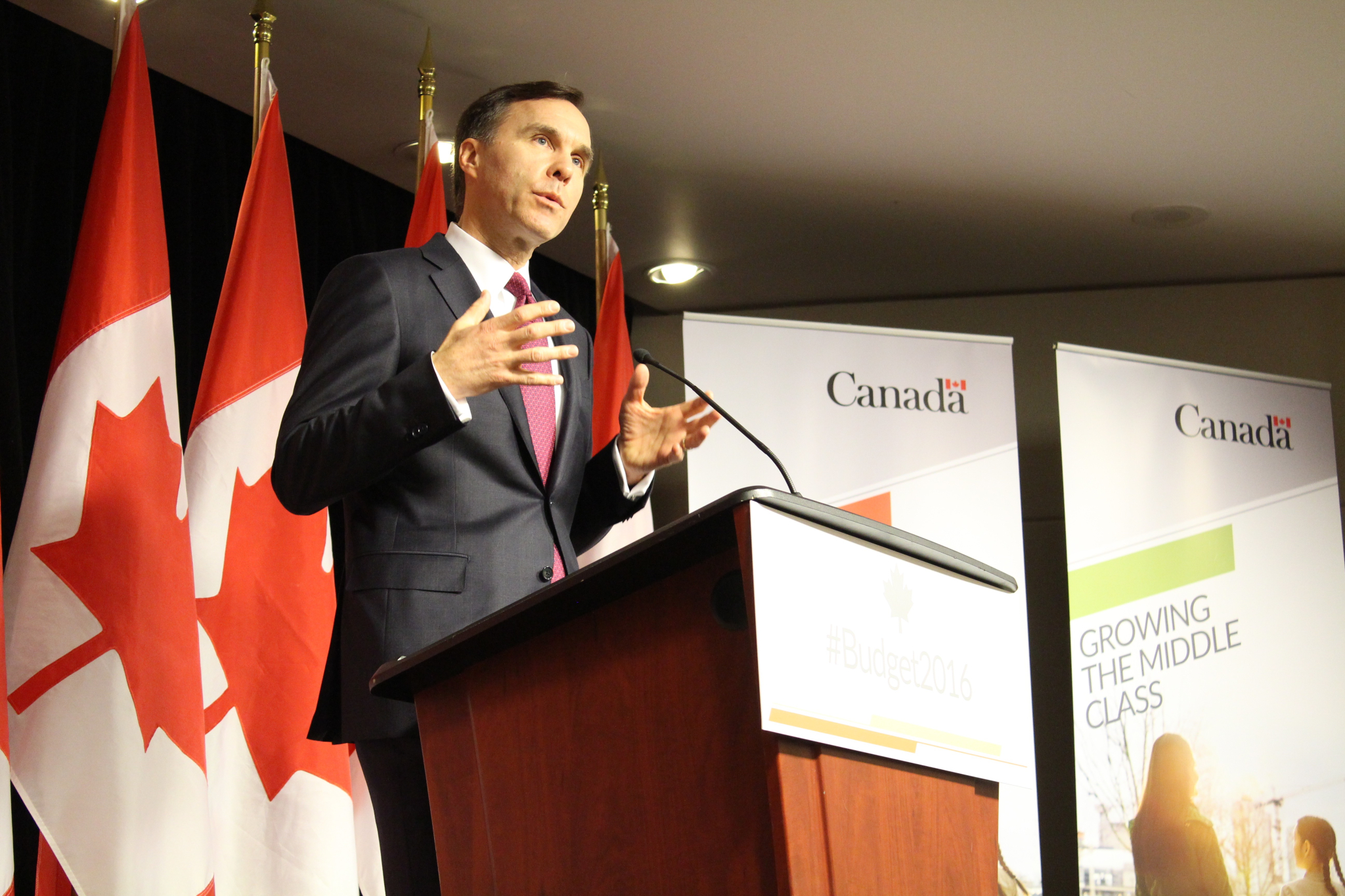 Finance Minister Bill Morneau has plugged in green policies throughout most chapters of his first budget.

Clean growth is one of the main priorities of its economic plan to encourage Canada’s transition away from fossil fuels toward a low carbon economy.

There are new proposed investments to support clean energy jobs through spending on pubic transit and other infrastructure, tax breaks to encourage deployment of electric vehicles, training programs and the greening of government operations, properties and buildings.

The first budget of Prime Minister Justin Trudeau's government proposes to create the building blocks for a new green economy.

“Think about what’s coming,” Morneau told Parliament after tabling the budget. “Wherever the sun shines and the wind blows, farmers and landowners can become energy producers. Particularly for rural regions hurt by falling commodity prices, the opportunities for economic diversification are enormous.

“Forestry and agri-food are good examples of sectors where the government can help to facilitate the shift toward a cleaner economy, and ensure good jobs in rural areas.”

The government is also proposing to reinvest in federal departments such as Fisheries and Oceans Canada and Environment and Climate Change Canada, reversing cuts in recent years to science and pollution monitoring programs.

For example, the Experimental Lakes Area, a world-class research facility that monitored the impacts of water pollution would get renewed federal funding after the previous government had attempted to shut it down.

A think tank, the International Institute for Sustainable Development had taken over the research facility in recent years, allowing scientists to continue long-term research that has allowed governments to identify the source of problems such as acid rain or blue green algae and find solutions.

One of the biggest spending items proposed in Morneau’s budget would be a $2-billion Low Carbon Economy Fund to help the provinces meet Canada’s climate change targets to reduce the heat-trapping greenhouse gases that contribute to global warming. The budget said this money would start to flow in 2017-2018 over two years.

New spending for Indigenous peoples is a key plank in Morneau’s new budget.

It goes significantly beyond what the last Liberal government had promised in its 2005 Kelowna Accord: Morneau proposed to invest $8.4 billion over the next five years to improve social and economic conditions Canada’s Indigenous peoples with targeted investments in education, infrastructure, training and other initiatives. The total would also include $40 million over two years to support the government’s plans to hold a national inquiry into Missing and Murdered Indigenous Women and Girls.

The government said its spending would be designed to address root causes of poverty, promote opportunity and inclusive growth, while benefiting the entire Canadian economy.

The budget also aims to end long-term boil water advisories within five years through a $1.8 billion investment in water and wastewater infrastructure over that period of time.

“We believe that it’s important that we work together (with Indigenous peoples) on a nation to nation basis and get to conclusions that can really make an important impact in improving the situation for Indigenous people,” said Morneau. “We believe we’re starting down a path that will together enable us to get there.”

Deficits and low price of oil

A major reason for the higher deficits is the continuing slide of the price of oil and the resulting impact on government tax revenues.

The new budget projects the price of oil will gradually rise from $52 per barrel in 2017 up to $63 per barrel by 2020.
If economic growth is stronger than expected, the Liberal government’s deficits might wind up being lower than anticipated.

The budget provides few details about any new significant investments in public safety, but it proposes to create a new federal organization focused on community outreach and counter—radicalization.

The new organization would get $35 million over five years to spend on reducing or fighting radicalization to violence in communities. It would coordinate its efforts with provinces, territories and international initiatives.

The budget also addresses growing concerns in Vancouver over cuts to the Coast Guard service. It pledges to reopen the Kitsilano Canadian Coast Guard facility with new investments of $23.6 million over five years, restoring search and rescue services in the area, while expanding services to include environmental response to emergencies.

When asked about the recent attack in Brussels, Morneau said the government is working on a plan and new measures to be introduced in the coming months.

Transport Canada would also get $143 million over three years to enhance railway safety and oversight of oil-by-rail and other dangerous goods.

The budget said that the old tax breaks for text books would end in 2017 since they are not targeted based on income and “provide little direct support to students at the time they need it most.”

The government is also expanding spending on programs to help young Canadians find jobs, with a focus on green jobs and economic growth in environmental sectors.

The budget is supporting a Liberal commitment to make the government more open and transparent with new spending in a variety of areas including $12.9 million over five years to enhance access to information.

The budget also said that the government intended to deliver a promise to give the information commissioner more powers to order government documents to be released, when needed.

The Canadian Broadcasting Corporation is a winner in the budget, getting an extra $75 million this year and then $150 million in the following year, reversing cuts imposed by the Conservative government and allowing the public broadcaster to modernize and enhance its services to Canadians.

The government has already introduced tax cuts for the middle class and a tax hike for Canada’s richest one per cent. The new budget includes a range of new spending that provide additional support for families.

This includes a new tax free Canada Child Benefit that targets low and middle-income families for the highest benefits, said the budget.

The budget also includes a variety of healthcare spending initiatives including new food safety spending for the Canadian Food Inspection Agency to enhance inspections and deal with food safety risks before they reach consumers. The budget also proposes to spend about $14 million per year to alleviate high food costs in Northern Canada.

The budget proposes to cancel the previous government’s plans to delay access to federal benefits for seniors such as old age security and the guaranteed income supplement programs.

The budget also proposes to enhance the Canada Pension Plan and increase guaranteed income supplement benefits by up to $947 per year for the lowest income single seniors.

Any senior with an annual income below $4,600 would get the maximum amount.

The budget would enhance benefits for veterans, and increase support for those with disabilities caused by military service with investments of $78 million over five years.

On the books, military spending appears to be facing a significant decrease of hundreds of millions of dollars in the coming years, but the government said these are not budget cuts. It said it is instead reallocating spending to future years for large-scale capital projects when they are needed.