Brussels, my sister and me 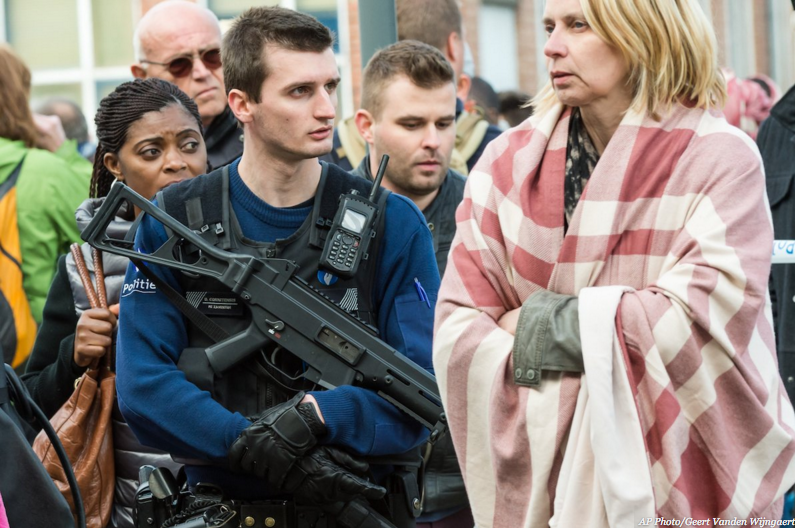 No doubt, like many of you, I learned of the terror attacks in Brussels as I was preparing to head out for work this morning. You likely paused for a moment to think about all the innocents murdered and maimed, and to curse the suicidal terrorists and their accomplices who were responsible for the carnage. Then, you went to work or got on with your day.

Before I went to work, I tried to reach my older sister and a young niece who live in Brussels. After a few harried phone calls and emails, I discovered they were all safe, including my niece’s husband and infant son. I was, of course, relieved they were unharmed and I reassured my wife and my desperately concerned daughters that their beloved auntie and cousin were alright.

I found my sister, Kimete, at work at the International School of Brussels, where she has been a teacher and librarian for 35 years. She was shaken and angered by today’s awful events. But she went to school because she wanted to be with her colleagues and students. (Later, she learned that one of her former students was seriously injured in the attacks.) She knew that staying at home, watching TV, would only make her more anxious and upset.

My sister knows that this isn’t the first, nor will it likely be the last time that there will be a terrorist attack in Brussels – which, symbolically and bureaucratically, is the centre of the European Union. (The Turkish people – who recently endured a string of equally atrocious terror attacks that, it should be noted, received much less media coverage in North America – know this sad fact, too.)

In raw, visceral moments like these, I understand my sister’s impulse to strike back at the “bastards.” But I know she also understands that once her anger and revulsion ebbs, she and Belgians will have to ask themselves these questions: Who precisely do we strike back at, and how and where do we do it, particularly when these amorphous adversaries operate by stealth and in the shadows?

These are not easy questions to answer. They need to be considered carefully and rationally. Otherwise, the urge to exact some measure of revenge — perhaps fleetingly satisfying – will continue, in a never-ending, fruitless cycle of tit-for-tat violence.

Another impulse that inevitably follows the eerie, apocalyptic scenes of death and destruction in the immediate aftermath of a terrorist attack, is to lavish even more powers and resources on the vast, already immensely powerful security-intelligence infrastructure.

I suspect that much of the establishment European media – with the help of coterie of sound-bite-friendly security “experts” – will rush to declare that the only viable prescription against more terror is to arm the security services with more laws and money.

The voices of dissent – who invariably get tarred as appeasers or terrorist sympathizers – will attract little or no attention. As well, questions about why the cob-web-like connection of domestic and international security services like the NSA and its European equivalents – that possess extraordinary tools of electronic surveillance – were unable to detect and deter the attacks will be rarely posed, let alone answered.

This predictable response to unquestionably empower security services is intended, in part, to mollify the loud, often incoherent-with-rage voices – in and outside the media – who demand immediate “action” be taken without ever defining what that action should be or considering its long-term consequences. Lost in cacophony is the fact that the same “remedy” was likely employed after the last terrorist attack and it did nothing to prevent the latest terrorist attack.

I have long argued that security services offer only the illusion of security. They are large, unwieldy bureaucracies that are not only glacially slow to change, but immune from real accountability. This is a recipe for continued institutional failure and disaster.

And despite their demonstrable incompetence, these security services are rewarded, without fail, for their incompetence by politicians on both sides of the Atlantic who are equally imprisoned by the old way of doings things and vulnerable to being labelled as “soft on terror” if they fail to give the spooks what they want, when they want it.

We witnessed this Groundhog Day-like attitude on display in Ottawa today. There was interim Conservative leader, Rona Ambrose, demanding in question period that Prime Minister Justin Trudeau abandon plans to even tinker with Bill C-51, Stephen Harper’s signature so-called “anti-terror” legislation that was supported by the then Opposition Liberal caucus.

Ambrose shouldn’t worry too much. I suspect that Public Safety Minister Ralph Goodale will make only small, cosmetic changes to the draconian law. But here’s the thing: however hard they huff and puff, governments cannot legislate away terror.

My sister knows better than most that if she had been on the subway or at the airport at that fateful hour, chances are she may have been among the dead and injured and there was little that any security service could or would do about it.

Finally, here’s what I know: if a terrorist attack occurs on Canadian soil that resembles in deadly magnitude what happened in Brussels, the next piece of “anti-terror” legislation introduced by this Liberal government will make Bill C-51 look like it had been written by Clayton Ruby.

At that point, we won’t be on our way down a slippery slope, we will have fallen off the cliff.