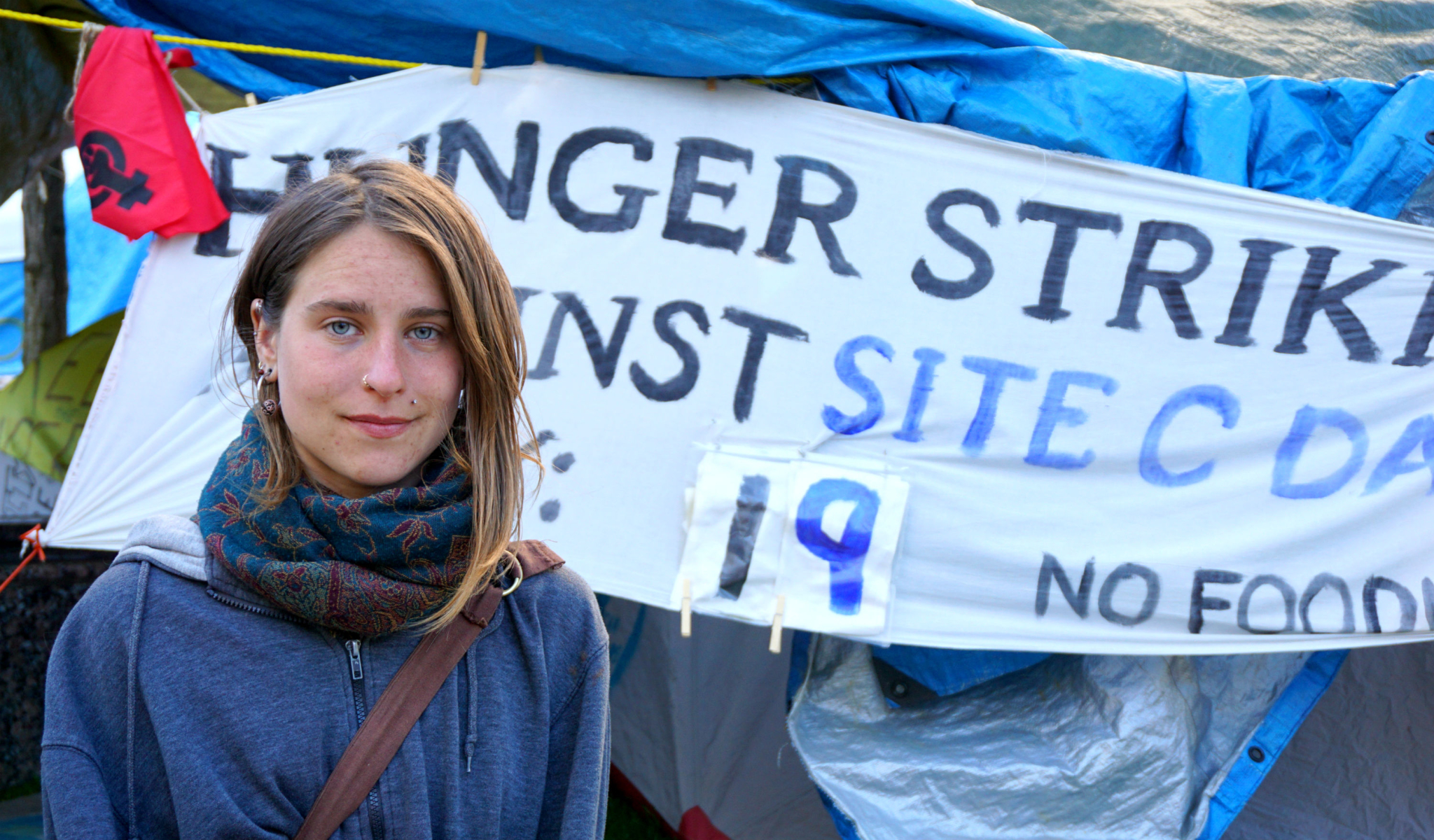 Site C protester Kristin Henry has been camped outside BC Hydro's office in downtown Vancouver since March 13, 2016, with little more than tea to keep her going. Photo by Elizabeth McSheffrey.
Previous story
Next story

British Columbia Premier Christy Clark "will have blood on her hands" if she continues to move forward with the Site C Dam, said protester Kristin Henry on the 19th day of her hunger strike against the controversial hydroelectric project.

She uttered the words only hours before her hospitalization late Thursday evening, when the 24-year-old's heart rate dropped to "concerning levels," according to her protest's Facebook page. Henry has survived only on water, tea, and vegetable broth since March 13. She admitted to feeling exhausted, dizzy, and light-headed, speaking with National Observer earlier that day.

Construction of the $8.8-billion "clean energy" dam started last summer on the Peace River of northeastern B.C., a river that flows right through the heart of Treaty 8 Territory belonging to the Doig River, Halfway River, Prophet River and West Moberly First Nations. Upon completion, it will produce enough power to light up roughly 450,000 B.C. homes per year, but its reservoir is expected to destroy more than 100 kilometres of river valley bottoms along the Peace River and its tributaries.

These First Nations say it would flood their burial grounds and other culturally important sites, and disrupt vital hunting and fishing activities.

“I don’t plan on living in a world that has the Site C Dam in it," Henry said from her encampment outside BC Hydro's office in downtown Vancouver. “I’m hopeful the government will come and engage with me because I think it would show a lot about the society we’re living in if they don’t.”

Beyond a short conversation with the CEO on Day 3 of her hunger strike, Henry said BC Hydro has ignored the presence of the campers on their doorstep. The company did not respond to National Observer's request for comment in time for publication of this story, but in a Wednesday news release, said:

"Site C will provide clean, reliable and cost-effective electricity in B.C. for more than 100 years."

“It’s a horrible project and Christy Clark said it herself — she’s trying to get it 'past the point of no return,'" Henry explained. “I think it’s pretty disgusting that they’re doing irreversible damage to Treaty 8 territory while the legality is still being challenged." 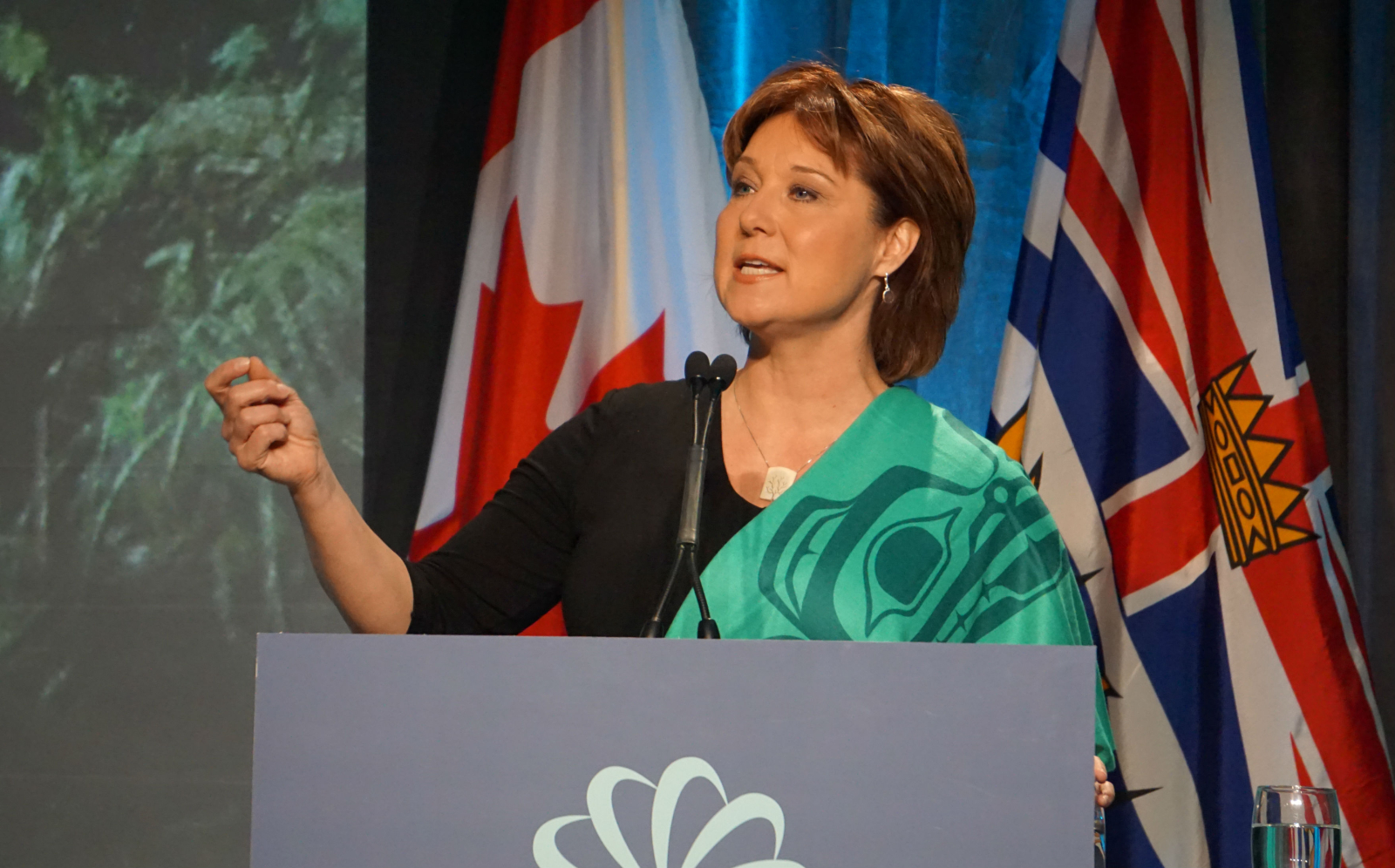 The B.C. and Yukon Territory Building and Construction Trades Council (BC Building Trades) has already filed a lawsuit against BC Hydro for terms in the provincial Crown corporation's request for proposals that prevent union members from striking during the construction of the Site C dam or recruiting other non-union members into unions.

The Blueberry River First Nations has also launched a court case against the province, alleging its Treaty 8 rights have been violated by decades of development on the territory. The lawsuit could impact construction of the dam as well as the expansion of mineral, oil and gas extraction in the province’s north.

A breach of Indigenous rights should be enough to put the project to rest, said Henry, whose group of out protesters have now appealed to the federal government for help.

"This is a matter of human rights and it is time the Government of Canada afforded Treaty 8 First Nations the same human rights afforded to the rest of its citizens," reads an open letter to Prime Minister Trudeau that has been sent to his office more than 1,000 times by protesters across the country. "Mr. Trudeau, will you keep your promise?"

The letters are currently being circulating outside the BC Hydro office in downtown Vancouver, where Henry said most residents who approach their occupation have never even heard of the Site C Dam to begin with. All it takes is a few moments of explanation, she added, before someone hastily signs a copy in opposition.

"We don’t need the energy but we need everything that the project’s going to destroy — the valley, the farmland, the water," she insisted.

The Site C Dam received federal and provincial environmental approval in October 2014, but the Joint Review Panel evaluating the project found that it would have significant adverse effects on rare plants, fish and fish habitat, put the fishing activities of local First Nations at risk, and threaten several species of birds, butterflies, and bats, and the western toad.

At least 63 endangered, red-listed, blue-listed, at risk, threatened, and of special concern animal species call the Site C area in the Peace River Valley home, according to the project's protesters, and Henry said her hunger strike is against something far bigger than a single hydroelectric project.

"I’m sick of putting my health on the line to fight our government to do what’s right for us, not industry," she explained, clutching her water bottle tightly. "The world can go in two directions — they can work with us, respect us, work with nature and we can have a bright future, or they can oppress us and destroy the environment.

“I think Site C is kind of this point — they can make that decision and go one way or another."

Green Party leader Elizabeth May applauded Henry's bravery but encouraged her to heed the advice of her doctors on her health. The federal Green Party leader was scheduled to meet her at the camp on Friday, an appointment she kept despite the 24-year-old's hospitalization.

She said Kristen is needed alive and well in the fight against the "disastrous" Site C project.

"It's not too late to stop it," said May, speaking with protesters outside the BC Hydro building. "That's why I'm grateful to Kristen and all of you here for making the point that it's not too late."

The Green Party leader said the riparian zones can still be repaired and the clearcut trees can still grow back. Provincial and federal permits have already been issued for the dam, but more federal permits are required under the new Liberal government to make it a fully operational project.

May joined protesters in Vancouver in calling on the prime minister not to issue a single one of them, lest he break one of his most vital election promises:

"Activities that are treaty-protected will be violated," she explained. "If the Liberals buy into that and allow it to continue, they will have violated their most fundamental commitment from the election campaign, the Throne Speech and the mandate letters from each of the ministers."

In 2001, May also went on a hunger strike to successfully pressure the federal government to clean up toxic waste in the Cape Breton Sydney Tar Ponds. She said the commitment Henry has made by putting her health on the line represents the Site C views of thousands of Canadians, and prayed for her speedy recovery.