Senate and P.E.I. gear up for Mike Duffy's expected return this week

By Michael MacDonald | News, Politics | May 1st 2016
#47 of 50 articles from the Special Report: Duffy's Redacted Diary 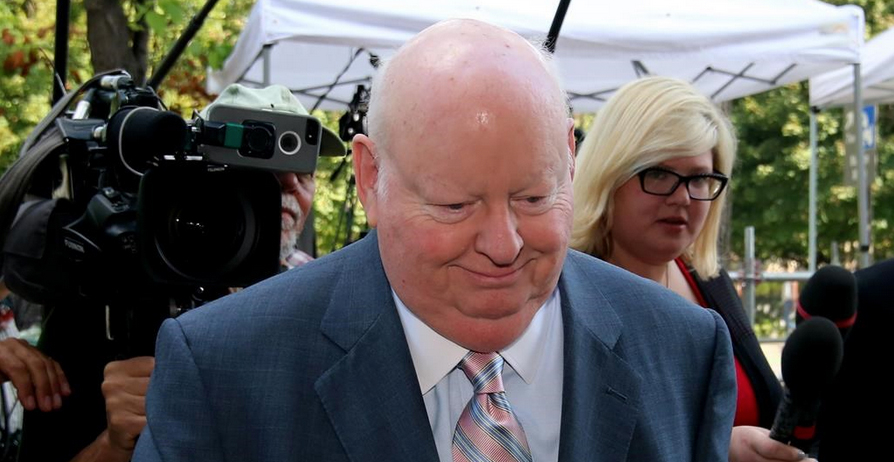 Photo of Mike Duffy in 2015 by Canadian Press
Previous story

Canadians could be forgiven for assuming P.E.I. residents are all feeling a sense of relief as Sen. Mike Duffy — the Island's most high-profile political export — prepares to return to the Senate this week after a three-year hiatus punctuated by intrigue, scandal and, finally, vindication in a court of law.

But that's not the way things work on the Island, where there are lingering doubts about Duffy's connection to Canada's smallest province and his expense claims.

On the sun-drenched streets of Charlottetown, where the icy wind off the Northumberland Strait keeps the city in a deep freeze, residents say they understand why the former TV personality was cleared last month on all 31 charges of fraud, breach of trust and bribery.

But that doesn't mean they're ready to accept what happened and move on.

"There really didn't seem to be any laws broken, and you can't be found guilty of something if there's no rules," said Charlottetown resident Scott MacBurnie, commenting on the Senate's vague spending rules and residency requirements that were at the heart of Duffy's trial.

Duffy has been living for years in an Ottawa suburb, but maintains a summer home in P.E.I. that he claimed as his primary residence when he was appointed to the upper chamber by former Conservative prime minister Stephen Harper in 2008.

Whether or not that home should qualify him for a Senate seat was an issue from the very day he was named, throughout his trial, and still, apparently, in P.E.I. itself.

"Mike Duffy wasn't qualified to be in the Senate in the first place, so why is he going back?" asked Charlottetown resident Alan Hoy, a man with a close-cropped grey beard, wearing sunglasses and a Montreal Canadiens tuque. "He wasn't a resident."

Alex Forrest, a young, stocky man from Summerside, P.E.I., said the intense scrutiny that Duffy faced in court should be extended to all of his colleagues in the upper chamber.

"It's not just him who got away with it, he's just the only one who got caught," he said.

The Senate continues to grapple with the fallout from the Duffy affair.

While its expenses system has been overhauled since the scandal broke, two other senators still face a trial and a third is awaiting to hear if charges will be laid.

Seven former senators are currently at risk of being taken to court to get them to pay back some $528,000 in expenses the auditor general found were improperly claimed.

"The lesson is: don't hate the player, hate the game," said Rob Lantz, who stepped down as leader of the province's Progressive Conservative party until just after the P.E.I. Liberals won the most recent general election.

"The larger question is about the Senate in general and how they govern themselves ... Mr. Duffy is entitled to walk back into the senate as a vindicated man, as far as I'm concerned."

Now that Duffy's been cleared, Senate rules allow him to walk right in when the upper chamber resumes Tuesday and take his seat. He'll sit as an independent, as he's not being welcomed back into the Conservative caucus.

To what extent the entire Senate caucus will embrace him is unknown. Duffy was suspended by the Senate, losing his pay and privileges, in 2013, long before the criminal charges were laid. While his pay resumed once the last session of Parliament was resolved, there has been a question of whether he's entitled to back pay.

"Any decision relating to that suspension, including retroactive sessional allowance, would also rest with and require a motion in the Chamber," said Senate Law Clerk Michel Patrice in a statement.

Conservative Sen. Leo Housakos, chair of the internal economy committee, told CTV Question Period that while a motion can be put forward to overturn the decision about his pay, he didn't think there would be "much of an appetite" for senators to revisit the issue.

"We support our own here," she said. "I'm glad to see him back in the Senate ... He is from Prince Edward Island. If he chooses to live somewhere closer to his job, then so be it."