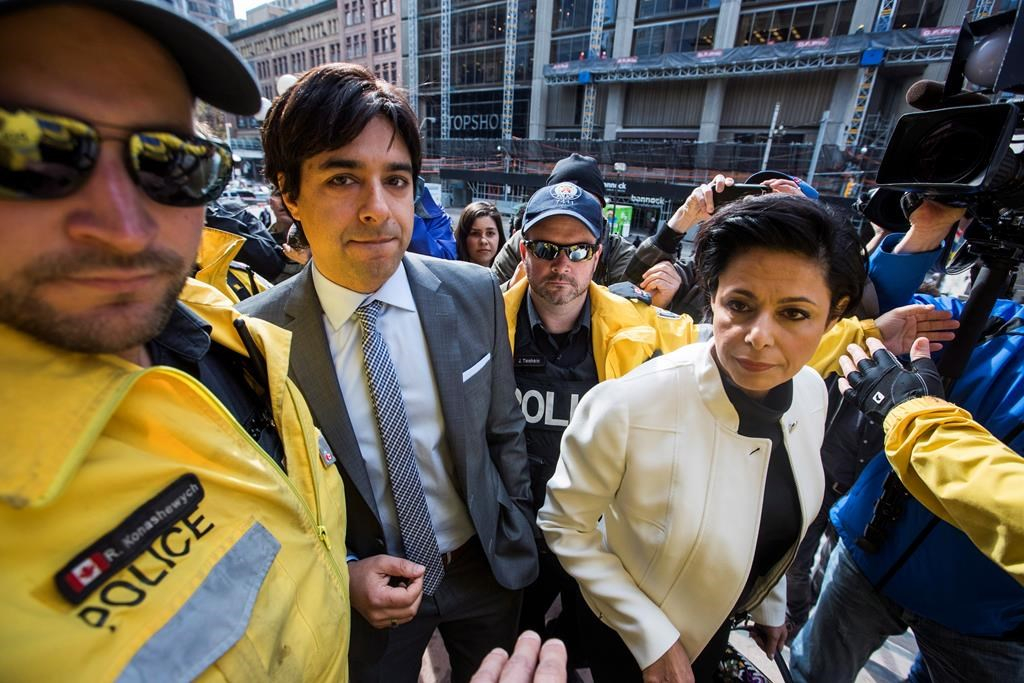 Jian Ghomeshi and lawyer Marie Henein appear outside a Toronto court on Wednesday. Photo by The Canadian Press.
Previous story
Next story

Jian Ghomeshi and Marie Henein never saw it coming, and neither did we. The rookie Kathryn Borel entered the legal Thunderdome and beat Henein at her own game without breaking a sweat.

Round 1 of the greatest legal rope-a-dope* in Canadian history took place Wednesday inside Toronto’s Old City Hall courthouse. It was there that Borel must have appeared on the defensive, watching as the Crown dropped all criminal charges in exchange for a measly peace bond. Oh, and an apology.

In legal terms, this doesn’t even rate as a plea bargain. The apology seemed like a sop, potentially designed to give cover to a demoralized prosecution in no mood for a second helping of Henein’s trademark dish. The unmistakable inference was that the Crown lacked confidence in its complainant and star witness.

But she was just warming up.

Kathryn Borel then held Round 2 on the steps of Old Toronto City Hall all by herself. Over the course of four minutes and twelve seconds she delivered blow after merciless blow to Ghomeshi’s reputation and future. His evisceration was so swift and devastating that, had this been a real boxing match, the ref would have stopped the fight.

But no one was there to cover for him. No well-heeled lawyer could leap to his defence, intimidate Borel with smeary details of long-forgotten transgressions, or spring some hidden surprise.

She was the surprise.

In a gross miscalculation, by admitting fault, Ghomeshi opened a clear lane for Borel to step in and deliver the knockout punch.

Weep no more, if you’re left feeling empty or angry by this abrupt ending to the Ghomeshi legal saga. This was justice at its finest—the court of public opinion has rendered a harsher and more enduring verdict than the criminal courts ever could.

Irrespective of the legal disposition of the case, through Ghomeshi’s own rather vague apology he admitted to sexual misconduct that breached Borel’s personal integrity. In his words:

"I now recognize that I crossed boundaries inappropriately. A workplace should not have any sexualized tone. I failed to understand how my words and actions would put a coworker who was younger than me, and in a junior position to mine, in an uncomfortable place. I did not appreciate the damage that I caused and I recognize that no workplace friendship or creative environment excuses this sort of behaviour, especially when there is a power imbalance as there was with Ms. Borel. This incident was thoughtless and I was insensitive to her perspective and how demeaning my conduct was towards her." (emphasis added)

"This incident." What does that mean, if not the precise elements of the charge against him?

Had this case proceeded to trial, what would have happened? We can surmise that Borel’s privacy would have been further violated through an invasive and humiliating line of questioning. Irrespective of the ultimate outcome, her credibility would certainly have been undermined to some degree through Henein’s relentless cross-examination, while Ghomeshi himself would likely not have testified at all.

Little of Borel's powerful Wednesday statement on the courthouse steps would have been admissible in court.

Had Ghomeshi been convicted, he would almost certainly not have been sentenced to spend a single day in prison. In many ways, the facts lend themselves more to unacceptable workplace harassment at the CBC, from which Ghomeshi has already been dismissed. Armed with his carefully drafted apology, loss of employment, and lengthy period of counseling (probably initiated early on by Henein in order to mitigate sentencing), Ghomeshi may well have been a candidate for a conditional discharge.

That would mean no criminal record, which is very close to today’s result.

Yet even the probability of conviction was a toss-up at best. Ghomeshi might very easily have been acquitted and claimed complete exoneration.

That outcome is forever beyond him now.

Why Henein opted for this dangerous gambit is a mystery, because it’s unclear what her client had to gain. Whatever that advantage was, it’s ashes today. Incredibly, after 18 months of silence, the first public statement by the most famous voice in Canada was an apology for abusive sexual misconduct. Was that really the plan?

And the details of that painstakingly crafted apology matter not a hair today. Nobody cares. The public sees it for what it is: an admission. Its mere existence permanently undermines the previous claims of innocence, and lends greater credence to all his accusers.

Without giving up anything substantial in the criminal prosecution, Borel emerged from this crucible of fire with her privacy and dignity intact, and her credibility strengthened by her own adversary. Untouched by defence attacks, she raised the torch not only in her own name, but as a formidable champion and witness for the 20 other women with similar complaints.

While surrounding circumstances might have been inadmissible in a criminal court, they bear repeating here. Ghomeshi's Facebook post, which admits his penchant for violent sex, was also demonstrably false and self-serving. He claimed to "to maintain a dignity and a commitment to openness and truth, both on and off the air." He made misleading statements about the reasons for his dismissal, maintaining that the CBC fired him out of squeamishness over his private sex life.

In sharp contrast, Heather Conway, Executive VP of the CBC, said Ghomeshi was fired when he showed senior management video evidence of him injuring a sexual partner. Janice Rubin's investigation into the workplace atmosphere at the CBC showed that Ghomeshi demeaned, humiliated and sexually harassed more than one employee, and that his abusive behaviour was enabled by managers at the CBC.

Ghomeshi's own apology, indistinct and amorphous as it was, essentially aligns both with Borel's accusations and Rubin's conclusions, while maintaining that he's just become aware of the consequences of his behaviour.

It's noteworthy that although credibility issues clouded the evidence of the three complainants in the previous sexual assault trial, Henein never significantly challenged their testimony that Ghomeshi was violent. But we know they were not alone. In total, some 20 women or more have come forward with similar stories.

To paraphrase Oscar Wilde, hurting one woman may be regarded as an accident, hurting 20 looks like you're a freaking nightmare.

And now, by handing Kathryn Borel the most coveted weapon of all, Jian Ghomeshi's apology, Marie Henein just created the face and hero for her client's accusers, who will now be galvanized into greater action.

This isn't just a loss, it's an obliteration.

*Rope-a-dope is Muhammed Ali’s legendary boxing strategy, in which Ali would allow his opponents to corner him against the ropes and rain blows down on him in the early rounds. He’d then capitalize on their exhaustion to knock them out.