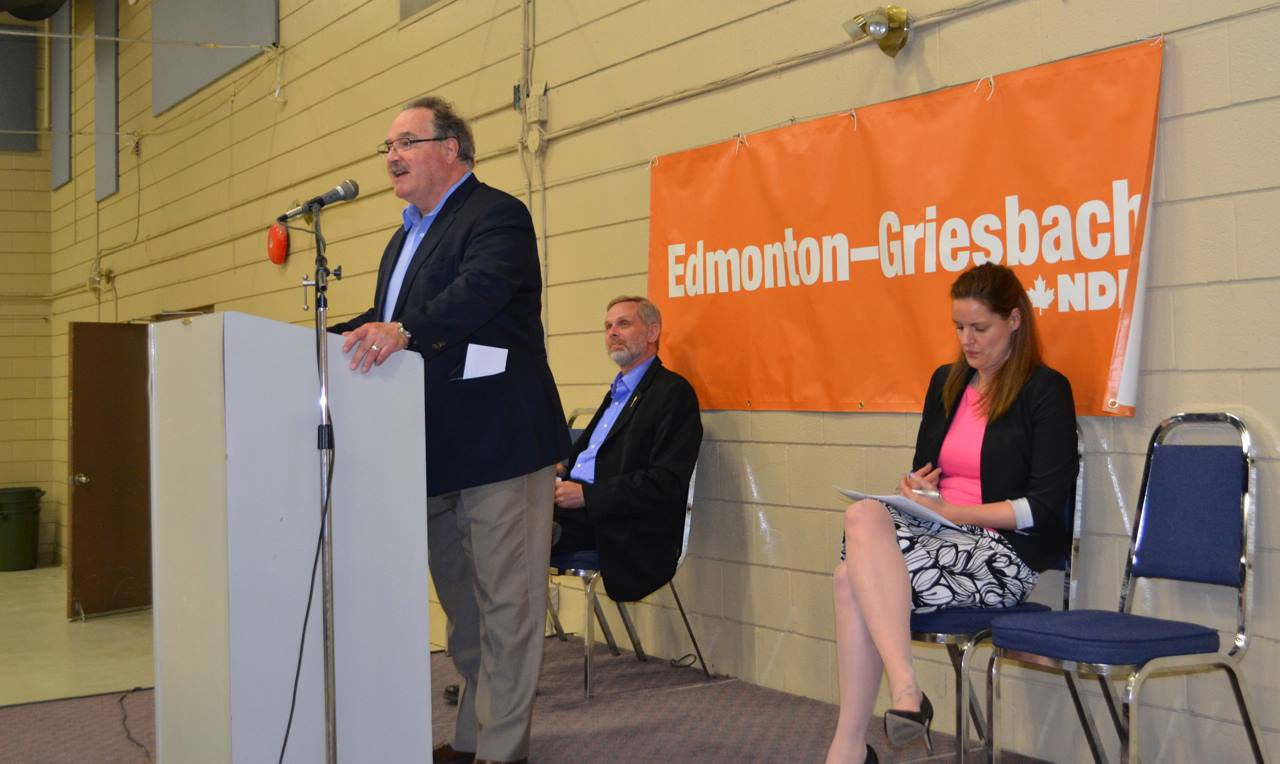 Government House Leader Brian Mason said while the National Energy Board makes decisions on pipelines, building political bridges with other provinces is critical.

"There’s absolutely no question in my mind that the government of Ontario and the premier of Ontario are key potential allies for our province in getting our product to tidewater.

"The fact the Wildrose can’t see that, and plays games to try and damage the government, means that they’re putting their partisan political advantage ahead of the interests of the province as a whole and that is a shame."

The Energy East line would take Alberta crude across Canada, including Ontario, to pipelines and refineries in New Brunswick to get a better global price for a key Canadian resource.

Wynne has said she would support the line with conditions, including high environmental and safety standards.

Wynne came as a guest of the Alberta legislature Thursday. As she sat in the gallery, Wildrose finance critic Derek Fildebrandt labelled Ontario one of the worst debt and spending offenders in the world and urged Notley not to follow the lead of the Ontario government.

Fildebrandt also heckled Notley, demanding to know why she had invited Wynne and not Alberta’s next−door neighbour, Premier Brad Wall of Saskatchewan.

A day later, Wildrose house leader Nathan Cooper said the caucus regretted the tone of the questions, a point reiterated by Jean on Monday.

"The tone and some of the heckling was inappropriate given that Ms. Wynne was in the audience. We regret that tone and we’ve come clean to that and we’ve mentioned that and we’ve apologized to Ms. Wynne," Jean said.

Jean was asked whether the Wildrose still supports Energy East.

Other legislature leaders said regardless of political stripe, all parties need to work in Albertans’ best interests.

"If they (the Wildrose) do want genuinely to build a pipeline east they’re not acting in a way that promotes that possibility," said Liberal Leader David Swann.

"They just shot themselves and Alberta in the foot with these comments."

Greg Clark said he doesn’t believe the Wildrose is working against the pipeline.

"Our friends in Wildrose tend to see the world in very political terms. As a result I can see why Brian Mason may think that," said Clark.

"What I will say is the way they treated Kathleen Wynne on Thursday is not helpful."

Progressive Conservative Leader Ric McIver said, "We are here solely to serve Albertans. If any of us can’t remember that, maybe we should be somewhere else."

Also Monday, Jean announced that Fildebrandt could be back in the Wildrose caucus was early as the next few days but first needs to make some changes to how he communicates on social media.

Fildebrandt was suspended by the Wildrose caucus late Friday night after he applauded a reader comment on his Facebook page that mocked Wynne’s sexuality.

Fildebrandt has apologized, adding he misread the original comment and is not homophobic.