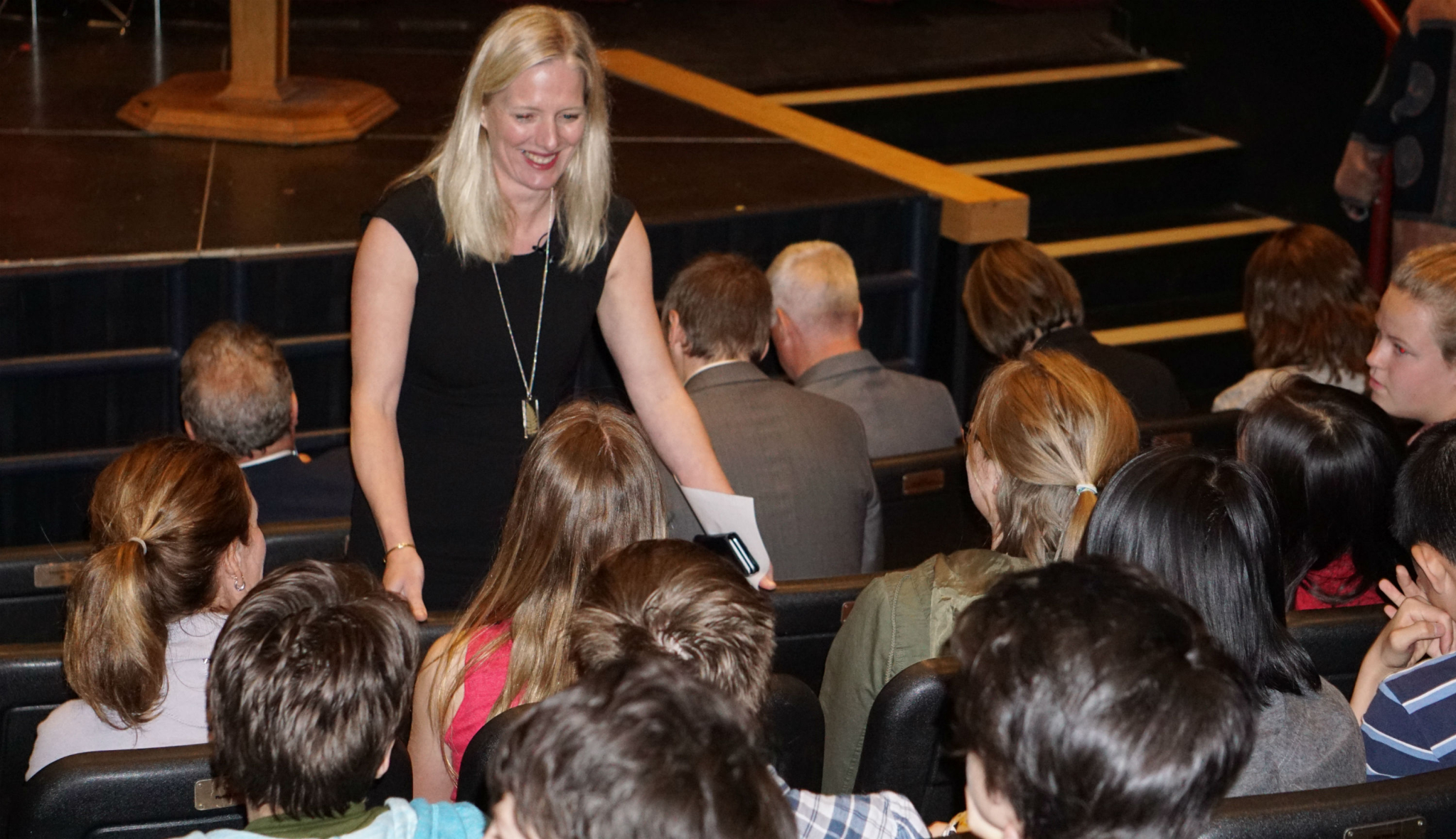 “It’s so critical that we act now because we’ve been going in the wrong direction,” she told an audience of dozens in Grades 9 through 12. “I have to come up with a climate plan that has to be presented to the prime minister. This is why I need your help.”

The students at Magee Secondary School held nothing back: one suggested carbon pricing for all precious resources, while another suggested taxing the meat, water, and dairy industries. Some recommended subsidies for clean tech companies, and others rooted for investments in solar aviation.

At the end of the session, McKenna was “blown away” by their innovation and posted this selfie (below) to Instagram. It was clear that Magee Secondary students spent class time learning about climate change and jotting down their green solutions.

But what about students everywhere else in Canada?

Not enough time for climate change

“Unfortunately, now there’s not very much time allocated for it,” said Breanne Bodnar, a science and biology teacher at St. Joseph High School in Grande Prairie, Alta. “It would be nice to have equal amounts of time [for climate change] as we have for the other content.”

While education is regulated provincially in Canada, which means the experiences of students will vary, the crunch for time and resources is an issue that resonates with teachers across the board. Bodnar, who has been teaching science for eight years, said she spends at least a month or more teaching Grade 9 and 10 students chemistry, physics, and biology, but as little as six days on climate change — a topic considered one of the greatest, if not the greatest, threat to the planet today.

Rebekah Barendregt, a colleague in the science department, backed her up. She said time is short and most teachers choose to focus on the units their students find more difficult to understand.

“There’s ways around it, but because the curriculum is so packed full of kind of more difficult material it’s challenging for teachers to fit in everything they want to talk about,” she told National Observer.

Barendregt managed to cover climate change more in depth by partnering up with a social studies teacher to have their students write a joint paper that covered it from both perspectives.

Teachers in Canada are bound by the provincial curriculum, but the amount of time they allocate to climate change and the manner in which they teach it is subjective, said the two Alberta educators.

According to an email statement from the Ontario Ministry of Education, climate change and related issues "may be explored extensively" in geography, history, and civics and careers courses for students in Grades 9 and 10. A similar statement from the Alberta Ministry of Education, said that a discussion on climate change "will likely arise" between Grades 1 and 12 in social studies programs.

In February 2016, researchers from Penn State University and the National Centre for Science Education published a rather shocking report that found nearly two-thirds of American schoolchildren are taught climate change poorly. Only 38 per cent of them were taught that climate change is largely the result of burning fossil fuels and roughly 30 per cent of teachers spent less than an hour on the subject during the last academic year.

The researchers surveyed 1,500 teachers across the country and found that some seven per cent of them attributed recent global warming to natural causes, in clear contravention of scientific fact. American education — like Canada — is not regulated federally, but by each individual state.

A similar study has yet to make waves north of the border, but from an outsider's perspective climate curriculum appears quite explicit in Canada: of the 10 provinces and three territories, all of which had some version of their curriculum available online, every single one of them referenced climate change somewhere in a mandatory class, and nearly all of them sought to examine the human causes of climate change, including the burning of fossil fuels.

For students in Grades 11 and 12, most ministries also offer specialized courses in environmental science, sustainability, or resource development that were not available as little as 10 years ago. Manitoba in particular has launched a province-wide initiative to help teachers incorporate sustainability lessons into classes across all disciplines and ages, and Alberta has a plethora of courses available in environmental safety, forestry, water management, and environmental politics.

“Environmental content has been added to the curriculum gradually over the years,” explained the Alberta Ministry of Education. “While the term ‘climate change’ may not be explicitly used in subjects outside of the sciences, the topic is explored in many grades and across subjects such as Language Arts, Social Studies, Career and Technology Foundations, and Career and Technology Studies.”

The B.C. Ministry of Education also confirmed that updates to its own curriculum allow senior high school students to "personalize" their climate change education experience with optional courses that focus on sustainability, stewardship, restoration principles, and climate change. Education ministries in P.E.I. and Nunavut did not return requests for comment in time for publication of this story.

While teacher discretion does plays a role in climate change education, said Bodner, her job has been made easier by the students themselves. Thanks to media, parents, previous instructors and more, most children enter the high school system with a sound understanding of the climate change concept:

“Going through the curriculum, they already know quite a bit of it," she told National Observer, "so whether that be through previous teachers, what they see on TV or what they decided to research on — they come in with quite a well-rounded knowledge.”

It's an outcome the federal government — though not directly responsible for education — is doing its best to support through visits like the one McKenna made at Magee Secondary School in Vancouver. Environment and Climate Change Canada also recently launched an environment Youth Zone online, a public ideas forum for tackling climate change, and a live Facebook chat on the topic.

It's a far cry from the previous administration, which in 2012 accused youth leaders of being poorly informed on international climate change negotiations after they openly criticized it for adopting positions they felt protected the interests oil and gas companies whose pollution contributed to global warming.

On how school curriculum on climate change could improve in Canada, Bodner and Barendregt had one suggestion:

"I would like to see the curriculum move towards skill-based competencies rather than so much knowledge-based material," Barendregt explpained. “I would rather have it more open to develop skills like research and reasoning so they can grapple with the challenges behind it."

This is a CRIME!

The so called "climate science", which is a "double oxymoron", because first of all, it has nothing to do with science. Science is the pursuit of understanding, in an effort to eliminate guess-work and opinion as the basis for decision making. Climate Science tries to elevate guess-work to the the status of "State of the Art", by creating computer programs to do their guess-work for them. What a Farce! If that isn't bad enough, they then proceed to treat opinion and consensus as if it were some kind of scientific fact! A total affront, to the whole concept of science! And these meteorologists, that call themselves scientists but fail to understand the meaning of term, almost never discuss climate, all they talk about is weather, and weather is NOT climate!

What we should be teaching our children is this:

CO2 is the greatest blessing, this planet could ever know! Further increases will only foster a greatly enhanced and robust ecosystem. Any attempts at reduction or mitigation of CO2 production, is absolutely idiotic. We might just as well, "SLIT OUR OWN THROATS!" because we are artificially and for no good reason, limiting our own ability to grow food and sustain ourselves in the future. Even NASA admits that our planet has been steadily greening since the dawn of the Industrial Age and the increase in CO2 is the cause. CO2 is GOOD! It wasn't an asteroid and it wasn't volcanic eruptions or climate change that whipped out the Dinosaurs, it was a sudden and precipitous drop in CO2 that caused the whole ecosystem to collapse and They with it.

There is no threat from CO2 or any other atmospheric gas. There is no Greenhouse Effect! It was just a "theory!” A theory that was proved wrong, which means that solar energy has nothing to do with climate!

The whole Greenhouse Gas conspiracy is a farce and a fraud! It was created as a mechanism of wealth transfer via the imposition of Carbon Taxes, another seriously flawed concept. Although a redistribution of wealth could be very beneficial to all concerned, what we don't need is, the transfer of resources from the lower classes of one culture to the lower class of another, which is what the whole carbon tax business all about. What we do need is, the redistribution of the wealth from the top 1%, to those in need, in this way no one suffers, not even the donors because they can't possibly spend it all anyway.

"I would like to see the curriculum move towards skill-based competencies rather than so much knowledge-based material," Barendregt explained. "...

Any Mississauga area students want to follow the building of a 'green' home?