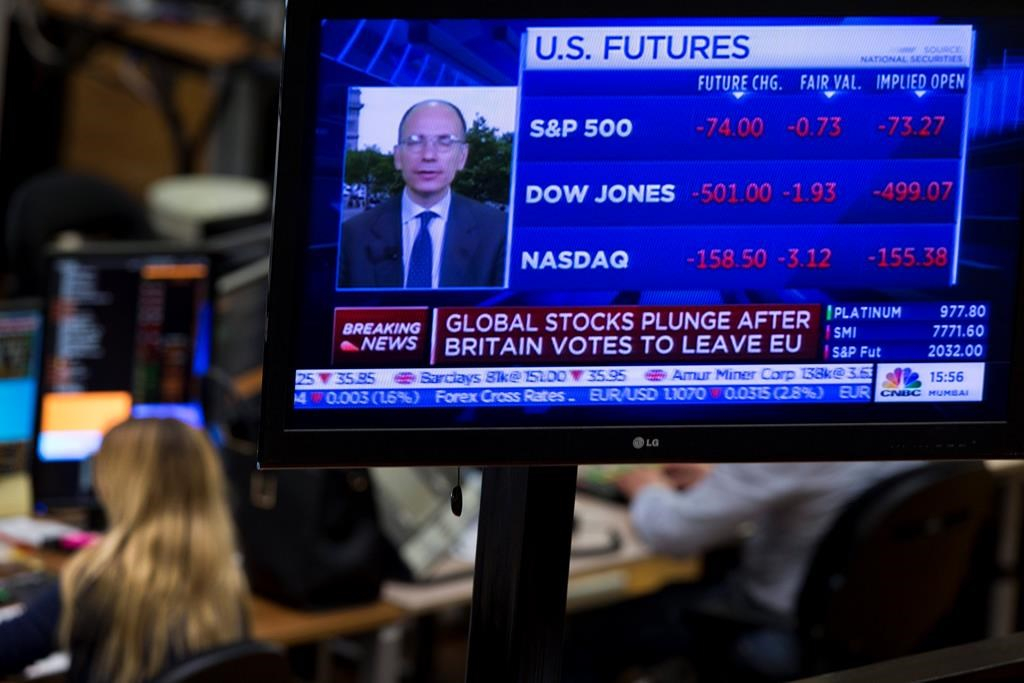 Markets react to news of the stunning Brexit vote on June 24, 2016. Photo by The Canadian Press.
Previous story

Canada is well-positioned to withstand the economic turmoil provoked by the Brexit vote, Prime Minister Justin Trudeau said on Friday, hours after a stunning referendum vote put Britain on a path toward exiting the European Union.

"Canada has tremendous economic fundamentals that we are strengthening with key investments in infrastructure and measures to grow our middle class," Trudeau said in a statement. "We are well positioned to weather global market uncertainty as we have done in the past."

The Canadian dollar is down more than a cent and half against against the U.S. greenback as markets around the world come to terms with the vote.

Meanwhile, the British pound plunged even more sharply against other currencies this morning, including the Canadian dollar.

The British pound was at lows that it hasn't seen since the mid-1980s.

It was down more than eight per cent compared with the U.S. dollar and about 6.5 per cent against the Canadian dollar. The pound was worth just under US$1.37 and just under C$1.79.

"Commodity prices (except for gold . . . ) are taking a hit from lowered prospects for global growth," BMO Capital Markets analyst Jennifer Lee wrote in a commentary.

Signs were pointing to a big drop on the major U.S. and Canadian stock market indexes.

Financial and resource stocks will likely set the tone for Canada's largest stock market once the Toronto Stock Exchange opens at 9:30 a.m. ET.

It says the Bank of England could cut its key interest rate as early as Sunday and "we might also see co-ordinated actions with other central banks to smooth currency movement."

A Scotiabank foreign-exchange commentary said there had been reports that central banks in Switzerland and Denmark had directly intervened to dampen currency fluctuations.

The S&P/TSX index closed on Thursday at 14,131.38, up 127.57 points or 0.91 per cent before it became clear that the Leave side had won the vote on Britain's place within the European Union.

Moments after his statement about Brexit, Trudeau's office issued another statement marking the celebration of Saint-Jean Baptiste Day, the national holiday of Québec.

"Today, on la Fête nationale du Québec, we celebrate the vibrant history of Québec and the unique culture and identity of its people. As a Quebecer, I take enormous pride in my province's creativity, strength, and character," Trudeau said in the statement.

"On this day, we pay homage to the French language and our French-Canadian heritage. Both have played a vital role in shaping our country, and defining who we are as Canadians."

Justin Trudeau thanks David Cameron for his service

Here is the full statement that Prime Minister Justin Trudeau issued following the results of the referendum on the membership of the United Kingdom (UK) in the European Union (EU):

"The people of the UK have chosen to leave the EU.

"The UK and the EU are important strategic partners for Canada with whom we enjoy deep historical ties and common values. We will continue to build relations with both parties as they forge a new relationship.

"Canada's connections to our partners around the world are among its greatest assets, and these relationships contribute greatly to the prosperity of all Canadians."

"Canada has tremendous economic fundamentals that we are strengthening with key investments in infrastructure and measures to grow our middle class. We are well positioned to weather global market uncertainty as we have done in the past.

"Prime Minister David Cameron indicated today that he will resign by the fall. On behalf of all Canadians, I would like to thank him for being such a close ally and good friend to our country. We wish him well."