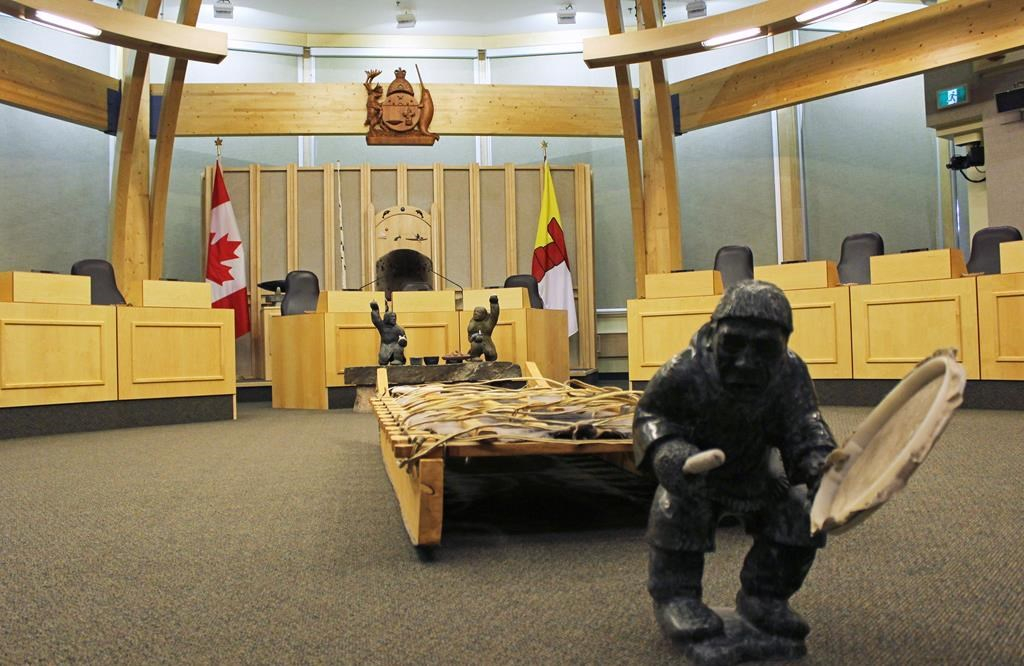 Nunavut's legislative assembly is located in Iqaluit. Photo by The Canadian Press.
Previous story
Next story

There are strange things done in the midnight sun, as beloved bard Robert Service once penned in his timeless northern classic, "The Cremation of Sam McGee."

That same line could easily apply to Nunavut and the oddly affable atmosphere on the floor of Canada’s newest legislature. Strangely absent is the familiar cut and thrust of mainstream Canadian politics, so customary to any devotee of partisan democracy.

During a recent exchange, High Arctic MLA Isaac Shooyook raised concern about how a generator hadn’t been installed in a newly built emergency shelter in Grise Fiord, despite being included in the original contract.

"I will certainly verify if it was in the agreement," said the minister responsible, adding that it sounded serious and if the government had neglected to include it they’d remedy the situation as soon as possible.

Shooyook thanked him, capping off an exchange that elsewhere could easily have erupted into defensive bickering and political showboating.

The territory’s consensus−based governance model, where the Speaker, premier and cabinet ministers are elected by the entire assembly, makes legislative goings−on largely devoid of the partisan parries and ripostes so typical of its neighbours to the south.

"It’s quite different from other jurisdictions.... There’s no partisan politics," said Nunavut Premier Peter Taptuna in an interview about the absence of political parties in the territory.

"Every elected MLA has the opportunity to participate in (forming) the government’s mandate. That’s probably the most unique thing."

Beyond its legislative assembly’s congenial nature, Canada’s most northerly capital building stands out in Confederation for its fusion of Western and Inuk cultural traditions.

That should come as no surprise, given that the creation of the territory came out of an enormous and lengthy aboriginal land−claims agreement and that nearly 84 per cent of the territory’s 37,000 people are Inuit.

Nunavut means "our land" in the Inuk language of Inuktitut.

Within the legislature’s assembly hall, which can be toured if the legislature isn’t sitting, 22 seal skin−lined seats face each other around a ring from which legislators address one another using both English and Inuktitut.

This circular orientation is another symbolic departure from parliamentary tradition, where the usual distance of two sword lengths between opposing rows of parallel benches was meant historically as a safeguard against the possibility of violence.

Curved wooden beams form an igloo−shaped dome around the assembly, while the centre of the circle plays host to a soapstone figure of an Inuk drum dancer caught in mid−sway. Behind him lies a full−size, rope−lashed sled carrying a variety of traditional Inuk hunting implements.

The legislative assembly is located in the territorial capital of Iqaluit, population 6,700, and has governed over one−fifth of Canada’s territory since Nunavut came into being on April 1, 1999. This makes it one of the largest and most sparsely populated regions in the world.

Construction delays marred the capital building’s opening, leading the territory’s inaugural assembly to meet for a short time in the gymnasium of a nearby high school.

Throughout the three−storey structure of glass and wood are gifts of welcome for Canada’s youngest political jurisdiction, given from Canada’s various provinces and territories, as well as from Greenland, indicative of the close cultural links between the two regions.

On the wall behind the Speaker’s chair hangs Alberta’s offering: an elaborate wooden carving of Nunavut’s coat of arms.

Flanked by a caribou and a narwhal, the carving’s central shield depicts several of Nunavut’s most prominent symbols, including the iconic Inukshuk stone wayfinder, the qulliq blubber lamp, a stylized trajectory of the midnight sun and Niqirtsuituq, the North Star.

Even the legislature’s mace — a timeless symbol of the supremacy of parliament — has a local flair, crafted from the tusk of a narwhal.

After depositing the mace before the Speaker of the house to mark the start of the day’s proceedings, the sergeant−at−arms recites the Lord’s Prayer in Inuktitut.

The remoteness of Nunavut’s legislature often puts it out of sight for everyday Canadians. But its unique blend of Western and Inuk traditions offers a homegrown alternative to the antagonism that is often equated with conventional Canadian politics.