By Elizabeth McSheffrey | News, Energy | July 6th 2016
#380 of 2009 articles from the Special Report: Reports from the Race to a Safer World 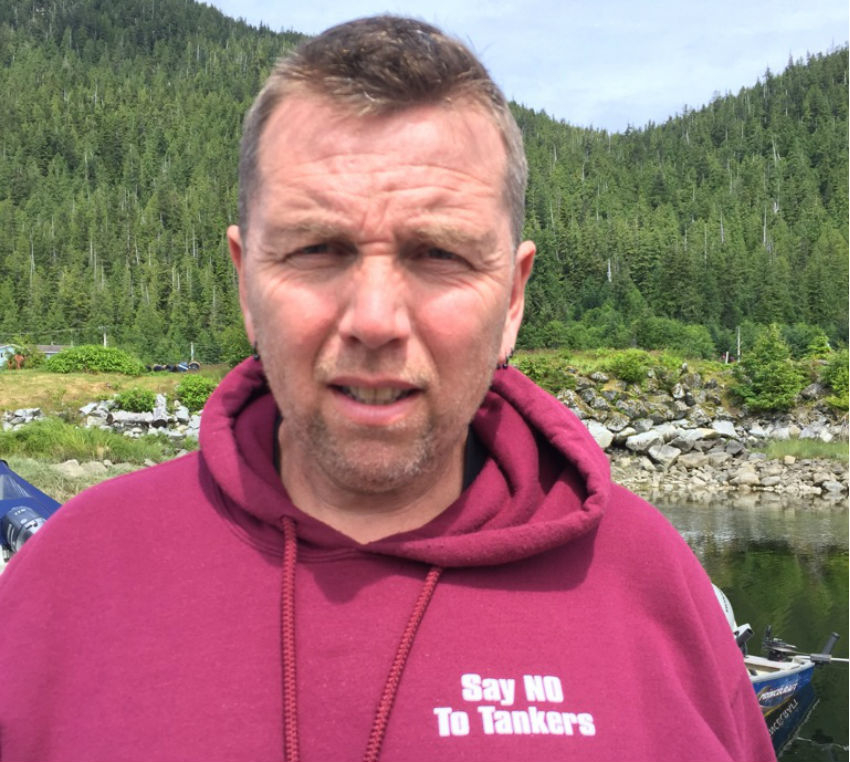 Gitga'at Councillor Cameron Hill has watched his grandmothers and children offer oral evidence against the Enbridge Northern Gateway pipeline, and said the fight has taken a heavy toll on his family. Photo courtesy of Cameron Hill.
Previous story
Next story

Gitga'at Councillor Cameron Hill's heart was broken the day he and his wife's grandmothers stood up and testified before the National Energy Board on the controversial Enbridge Northern Gateway pipeline.

It was 2009, the peak of the First Nations consultation process, yet there they were — two elderly women on their own native soil — "defending who they were" before a Joint Review Panel of outsiders.

It was difficult to watch, said Hill. As beloved matriarchs of the Gitga'at First Nation, the women had earned the right to a quiet retirement. Instead, they went to war against a corporate energy giant to protect land their families had lived on for thousands of years.

"That’s a very hard pill to swallow," he told National Observer. "They weren’t able to just enjoy the twilight of their elderly years. But they were very strong women and instilled the norms, beliefs and values of Gitga’at culture in all of their children, grandchildren and great-grandchildren."

Most importantly he added, "Through them, our fight continues."

Hill's grandmothers did not live long enough to see a Federal Court of Appeal overturn the Harper government's approval of the project late last month, pouring salt in a wound already spread wide open. The Gitga'at are one of eight First Nations, four environmental organizations and one labour union responsible for the lawsuit, which successfully argued that Indigenous groups had not been adequately consulted as many of the project's impacts went "undisclosed, undiscussed, and unconsidered," by the government.

Enbridge has said the court ruling addressed some important concerns but that it remains committed to the project, along with its own First Nations partners.

For Hill, the ruling constitutes a victory overall, but one that has come at great cost to First Nations families, including his own.

A way of life worth fighting for

The Gitga'at territory is breathtaking, spanning 7,500 square kilometres of land and water on the northwest coast of British Columbia. Killer whales, humpbacks, salmon, and sea lions grace its glassy waters, while grizzlies, wolves and the majestic Spirit Bear, a bear found nowhere else in the world, roam freely through its forests.

Hill was born and raised there, and in addition to serving as an elected councillor of his band, works as a teacher and principal for school in his home community of Hartley Bay. It's a community of fishers, trappers, harvesters and hunters who live off the land the way their ancestors have for millennia.

"My kids have been brought up on the land and sea just as I have," he explained. "They’re fully aware that if an oil spill took place, our way of life would change."

If built, the Northern Gateway pipeline would increase tanker traffic in the Gitga'at's quiet waters, less than two kilometres from Hartley Bay. An oil spill would critically endanger the vulnerable species that live there, the First Nation argues, and compromise the seafood and cultural resources they rely on.

"I hope the ruling sends a strong enough message that the Gitga’at people are going to fiercely defend what is theirs," said Hill. "No one wants to lose the way of life that we have."

The First Nation's primary concern is for its young people, whose futures may be compromised by industrial projects affecting their territory, including oil and liquified natural gas. While the Northern Gateway pipeline may be stalled for now, its members recognize that their fight is far from over.

The high price of victory

Hill, his fellow Councillor Marven Robinson and two others were at Gitga'at Elder Helen Clifton's house when the court ruling came down. They celebrated the news of course, but were held back in their jubilation by the price they had paid for victory.

For roughly a decade, the Gitga'at have poured their resources into fighting Enbridge, a Calgary-based energy giant they could not have hoped to compete with financially. The battle waged on, draining the band's limited resources as it dealt with another major hurdle — negotiating to protect the Great Bear Rainforest with the B.C. government, logging industry, and environmental organizations.

“It’s taken over 10 years of my life, right as soon as I got on council," said Robinson. "Every meeting we got to, where we were supposed to deal with our own stuff, has been eaten up by Enbridge. It shouldn’t take priority, but it’s so important for the Gitga’at Nation not to allow it."

The entire community has paid dearly for it, as have Robinson and Hill's own families. Hill's grandmothers offered oral evidence during the Joint Review Panel process, and so did his and Robinson's children. The topic has dominated dinner conversations, consumed lunch hours, evenings and weekends, and resulted in too many sleepless nights to count.

“I remember in my testimony, I said the same thing — these kids should not be worrying about the environment like this," Robinson explained. "When I was a kid I was fishing at the bridge."

His mother was dying at the time, he added, and he should have been at her bedside while she was sick. He told the panel he felt robbed.

And it's all disturbing to Elder Clifton, who has fought for her community against Northern Gateway, land-grabbing, and other development projects for as long as she has lived in Hartley Bay. As a Gitga'at matriarch, her responsibilities include passing on the language, stories, and traditions of her people to the next generation, a generation whose future she fears is up in the air.

At 90 years old, Elder Clifton has always been torn between pessimism and optimism. As member of the Killer Whale Clan — a species vital to Gitga'at culture — she rejoiced in the Enbridge court ruling, but called it "bittersweet." Despite the good news, part of her still felt like "going somewhere and crying" because even if the pipeline project never resurfaces, other most certainly will come their way.

"I try to tell my people when they go out — especially the young ones when they’ve caught this big salmon or seen a big whale — to enjoy it, enjoy it while you can," she said. "The world is moving in on us. You enjoy the freedom of the sea, the land, and air while you can."

Despite her advanced years, the elder has vowed to fight until her dying breath to preserve the life she has been blessed to lead, and pass onto to her children, grandchildren, great-grandchildren, and now, great-great-grandchildren. Her mission has recently pushed her to obtain a university degree in social, take courses in native studies, and learn the jargon and science required to speak meaningfully with lawyers and developers.

She, Hill, and Robinson agreed — while the Enbridge battling has been taxing, it has made the Gitga'at a stronger nation.

"It was overwhelming, but it gave me confidence in my ability to speak up for the people," she said. "I’ve always told my people that we always need to prepare for the next move of Enbridge. Although this gives us a breather, it’s to take a deep breath and figure out what we do now."

The Trudeau government could still re-approve the Northern Gateway pipeline, but the court ruling requires it to either redo Aboriginal consultation, or reconsider submissions already on public record in order to delve more deeply into the concerns of First Nations. While the prime minister promised before his election last October the project “will not happen” on his watch and that he thought the Great Bear Rainforest was no place to put a pipeline, the Gitga'at are preparing for the worst.

Throughout this process, they have learned to say 'no,' said Robinson, a right they will continue to exercise in collaboration with other First Nations and environmental partners.

"Things are changing," he explained. "People are listening and it does really help when you have people outside the community that actually care too. We’ve gotten to know people we can trust to help us out.”

While the list of First Nations opposed to the pipeline is substantial, at least 31 First Nations and Métis communities support Northern Gateway through the Aboriginal Equity Partners group, which owns part of the project. A representative of the group said it is still "reviewing" the court decision and would comment when it had more information, but according to its website:

"Ownership means jobs, financial dividends, education and business opportunities for our communities. Ownership means protecting our traditional lands and way of life. Through this project, the inescapable economic component of our title rights under Section 35 is made real. Ownership means giving us the power to build a better future."

By Elizabeth McSheffrey | News, Energy | April 25th 2016
Reports from the Race to a Safer World