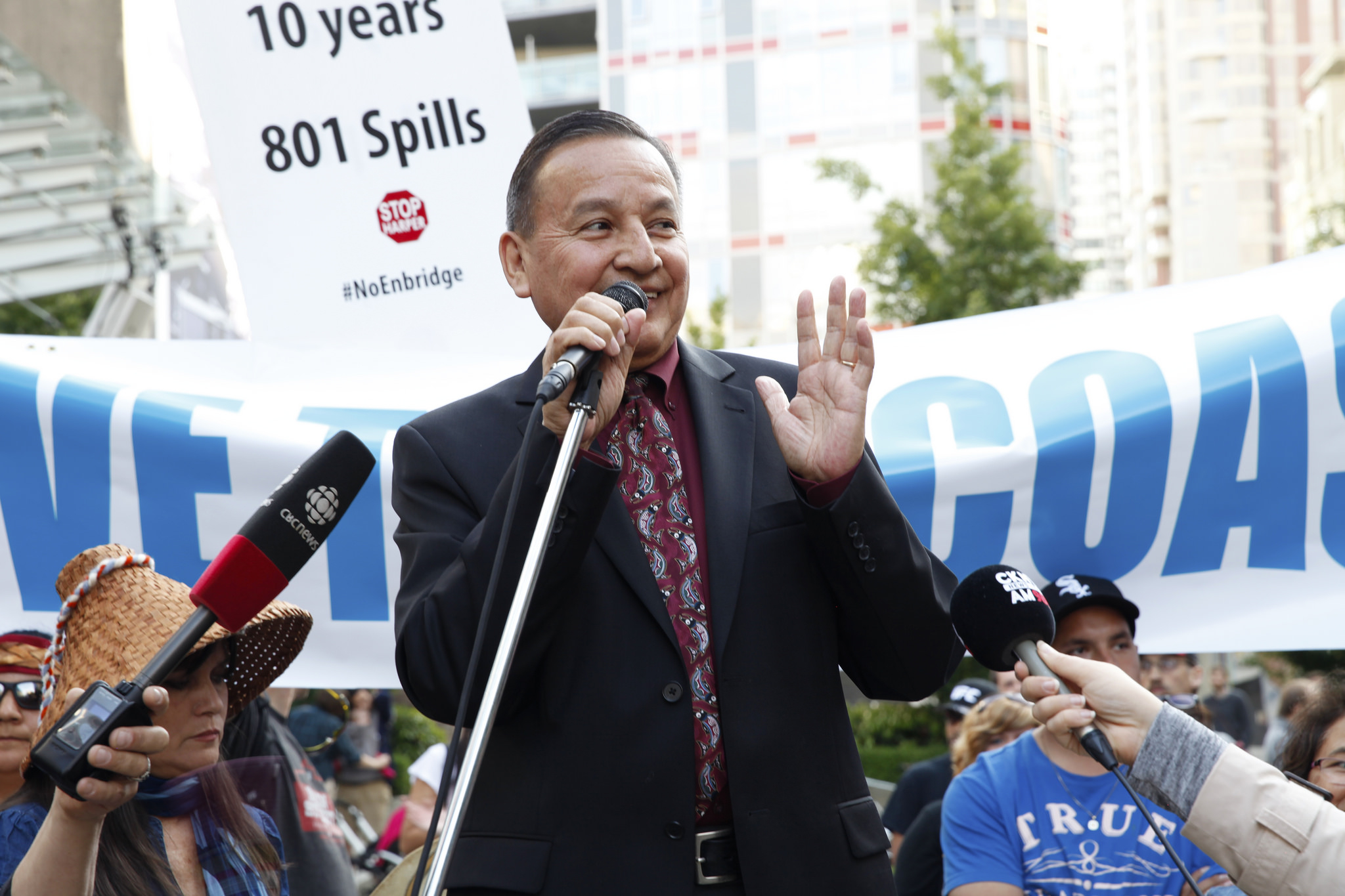 UBCIC's Grand Chief Stewart Phillip Enbridge pipes up against the Enbridge Northern Gateway pipeline on the day of its federal approval in June 2014. Photo by Mychaylo Prystupa.
Previous story
Next story

"You need to understand nothing has changed in terms of our opposition — it’s steadfast, solid, and deeply-entrenched," Grand Chief Stewart Phillip of the Union of BC Indian Chiefs told National Observer. "Governments are known to be quite often inconsistent, but we’re not." Phillip was speaking of the Enbridge Northern Gateway Pipeline proposal.

"We’re committed to our lands and territories, particularly protecting and defending our rivers and streams from catastrophic pipeline ruptures or tanker spills."

Once completed, the Enbridge Northern Gateway pipeline would carry up to 525,000 barrels of oil per day between northern Alberta and the deep-water port of Kitimat, B.C., ploughing through unceded Indigenous territory, and precious whale and salmon habitat. It was approved by the National Energy Board (NEB) under the Harper government in June 2014, despite 1,159 of 1,179 submissions presented at NEB hearings in opposition to the project.

It is also is the subject of a handful of court cases, and has been opposed by more than 100 Indigenous groups as signatories of the Save the Fraser Declaration against pipelines through traditional territories in the Fraser River watershed.

"I’m not surprised [by the rumours], but I don’t think Enbridge is going to make their permit deadline," said Geraldine Thomas-Fleurer, coordinator for the Yinka Dene Alliance. "They don’t have any shippers' contracts, they don’t have Aboriginal support, and we still have the Save the Fraser Declaration, which has over 130 nations signed, and blocks any way for them shipping to the coast."

The movement against Northern Gateway remains strong, she explained, as the pipeline remains locked up in lawsuits, struggling to navigate more than 200 federal environmental, financial, and technical conditions placed on its approval.

A "shell game" from the Harper days

In a Bloomberg article published on Monday, federal representatives refused to release specifics on Trudeau's pledge ban on tanker traffic in northern B.C., and would not confirm that Northern Gateway, is in fact, dead.

Before his election last October, the Liberal leader promised the pipeline “will not happen” on his watch if he became prime minister, but Thomas-Muller argued his lack of clarity on tar sands expansion is a flashback to the government secrecy of Stephen Harper's administration.

“This is all part of the shell game that the federal government of Canada under Trudeau continues to play from the Harper days,” he explained.

“The Liberal government has been really effective at spinning messages and confusing things with the whole pipeline debate in the country, and I think we’re seeing a bold hypocrisy with the recent international signing of the Paris accord, which included our own prime minister committed to a 1.5-degree target and still talking about building pipelines.”

He expressed concern with Notley's reversal on the pipeline as well — the Alberta NDP leader campaigned against the project in 2015, but her spokesperson, Cheryl Oates, confirmed with National Observer that she is now open to its construction based on the "optimism" of people working behind the scenes on the pipeline.

She recently sat down for talks with Trudeau about Alberta’s faltering economy and the relationship between pipelines and climate change leadership, and reportedly urged Trudeau to support pipelines because they were more environmentally friendly than transporting oil by rail. Oates also confirmed that she is engaged in multilateral conversation with the B.C. government to negotiate support for Alberta pipelines in exchange for a contract to buy B.C.’s hydro power.

“I think Notley is emboldened by the passage of Alberta’s climate plan and looking to do some horse trading with this shared political objective of un-land locking tar sands to international markets,” said Thomas-Muller, also a member of the Mathais Colomb Cree Nation in Northern Manitoba

"We need to be moving Canada towards capping existing production, stopping any new expansion in the tar sands, and certainly not building any expanding pipeline infrastructure that’s going to hardwire the Canadian economy to dirty fossil fuels past 2050, where we’ve committed to 100 per cent renewables.”

He joined environmental organizations across the country in expressing frustration with games around climate commitments and pipeline proposals like Northern Gateway, Trans Mountain's Kinder Morgan expansion, and TransCanada's Energy East. Of the three, Northern Gateway is the only one with federal approval.

"Rachel Notley is reviving the ghost of the Northern Gateway pipeline as part of a strategy to present Kinder Morgan as the lesser of two evils," said Dogwood Initiative's Kai Nagata, "but it's backfiring in two ways — it makes her sound like a flip-flopping politician who's clueless about pipelines."

“I think that putting, trying to put, or even pretending to put confidence back into these pipeline proposals is an absolute blow to the commitments that Canada has made around greenhouse gases and climate change," he explained. “I also think it’s putting a patient that’s on life support in the case of Enbridge back into play when the majority of people in British Columbia were happy to see it at death’s door.”

Greenpeace Canada's Mike Hudema said his organization be mounting aggressive campaigns if it appears the Northern Gateway pipeline could really be built at the end of the year, and further condemned conversations between provincial and federal leaders about the possibility of building more pipelines.

“These conversations are in complete violation with government commitments to respect the rights of Indigenous people," he told National Observer. “There’s [also] no climate leadership that can be found if you’re going to build new pipelines.”