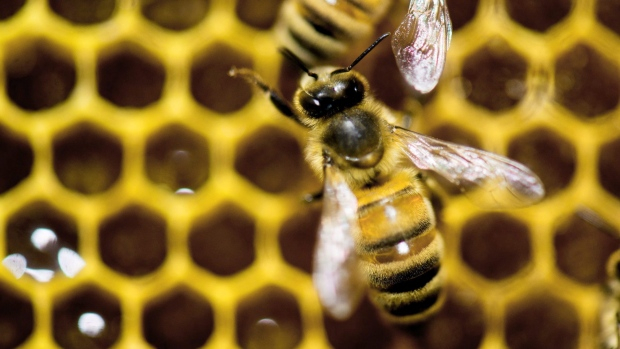 Bees are among the pollinating insects at risk from neonicotinoid pesticides currently circulating in Canada. Photo by Associated Press.
Previous story
Next story

Four environmental groups have taken Health Canada to court in an attempt to protect pollinating insects − particularly honeybees − from a harmful class of pesticides currently circulating in Canada.

According to court documents filed Wednesday by the David Suzuki Foundation, Friends of the Earth Canada, Ontario Nature and the Wilderness Committee, a number of pesticides containing two dangerous neonicotinoid active ingredients have been unlawfully registered in Canada for more than a decade.

Neonicotinoids or neonics, are the most widely-used class of insecticides worldwide, and have recently been linked to wild pollinator deaths in bees, butterflies, moths, and other non-target species. There are 39 products currently registered in Canada that list either Clothianidin or Thiamethoxam as active ingredients, both of which are a type of neonic.

"Canadians have made it clear: We want to get neonicotinoids out of our agriculture, and bring back pollinators.”

The organizations, represented by Ecojustice, are now suing Health Canada's Pest Management Regulatory Agency (PMRA) for failing to live up to its legal responsibility to have “reasonable certainty” that a pesticide will not harm the environment before registering it. They also allege that a number of Thiamethoxam-based pesticides that have been registered for years in Canada without ever being subject to public consultation required by its Pest Control Products Act.

“The PMRA has taken a see-no-evil, hear-no-evil, speak-no-evil approach by repeatedly registering these neonicotinoid pesticides without important scientific information on their risks to pollinators," said Ecojustice lawyer Charles Hatt in a statement from the law firm.

When asked about the lawsuit this morning, Health Canada issued an email statement claiming that the PMRA gave careful consideration to neonicotinoid products before registering them:

"The registration decisions made by Health Canada’s PMRA pertaining to neonicotinoids were made based on sound science and evidence," said media relations officer André Gagnon. "More info on our joint work with the U.S. Environmental Protection Agency, risk mitigation measures and reductions in bee incidents can be found here."

Health Canada is currently reviewing the judicial review applications, he added, and cannot comment further at this time.

Editor's Note: This story has been update to include a statement from Health Canada.