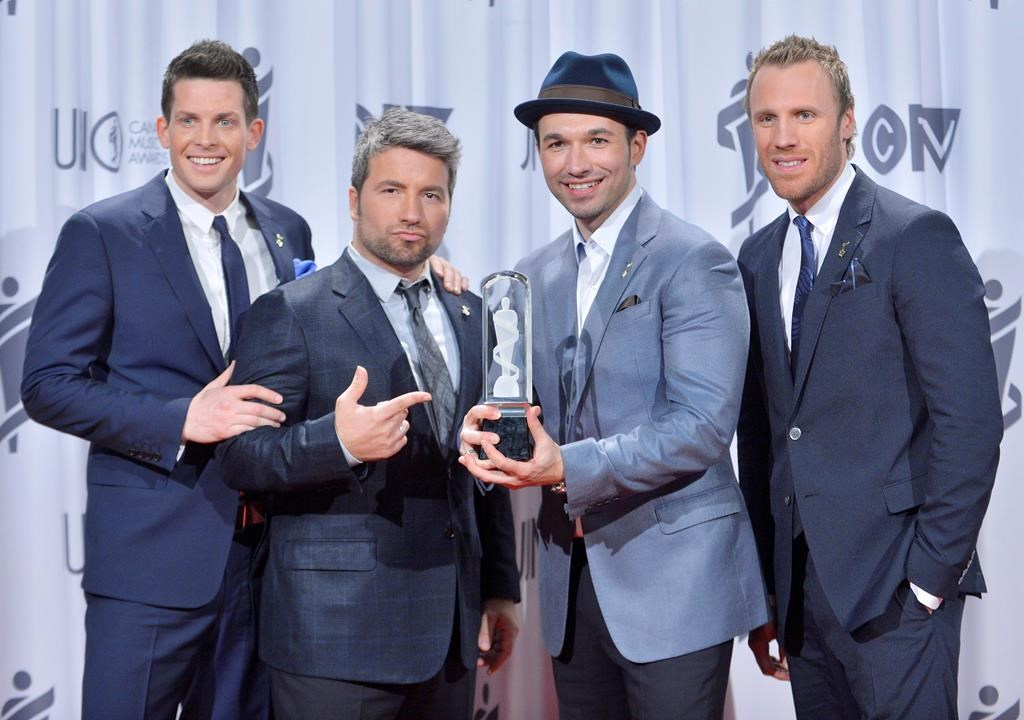 The Tenors at the 2013 Juno Awards in Toronto. File photo by The Canadian Press.
Previous story

Members of The Tenors quickly distanced themselves from a rogue Tenor on Tuesday night after a member of the classical-pop group inserted a political statement into the lyrics of O Canada before the Major League Baseball all-star game in San Diego.

During their on-field performance at Petco Park, a line in the anthem was changed to "We're all brothers and sisters, all lives matter to the great." The normal lyric is "With glowing hearts we see thee rise, the True North strong and free."

On Facebook, members of the British Columbia-based quartet blamed the alteration on Remigio Pereira, saying he acted as a "lone wolf" who changed the anthem to "serve his own political views."

Their statement said they are "deeply sorry" and "shocked and embarrassed" over what they term the "disrespectful and misguided lack of judgment by one member of the group."

"The actions of one member of this group were extremely selfish and he will not be performing with The Tenors until further notice," said the statement.

"Our sincere apologies and regrets go out to everybody who witnessed this shameful act, to our fellow Canadians, to Major League Baseball, to our friends, families, fans and to all those affected."

Pereira — who sang the altered lyric alone and drew a sideways glance from the Tenor to his left — also held up a sign during the performance saying "All Lives Matter." The words "United We Stand" were written on the back of the sign.

"I've been so moved lately by the tragic loss of life and I hoped for a positive statement that would bring us all together," Pereira later explained on Twitter.

"That was my singular motivation when I said all lives matter."

Although the audio wasn't crystal-clear at the park, many fans reacted with surprise. The Canadian anthem wasn't shown live on U.S. television, but it aired in Canada, where the decision to change the words drew a firestorm of criticism on social media.

Major League Baseball was also taken by surprise by the lyric change. Spokesman Matt Bourne told The Associated Press they "had no idea" Pereira intended to make a political statement.

San Diego was also home to another controversial rendition of an anthem in July 1990 when actress Roseanne Barr delivered a shrieking, crotch-grabbing version of The Star Spangled Banner.

Barr was roundly mocked and ridiculed for her performance at Jack Murphy Stadium, where the Padres played at the time, and also drew a sharp rebuke from then-president George Bush.

The term "All Lives Matter" was born in controversy into the American political vocabulary last year. In the heat of a debate over police shootings, presidential candidate Martin O'Malley uttered the phrase at a Democratic party forum. He was booed and later apologized.

Some viewed it as an innocuous statement. Conservatives ridiculed O'Malley for apologizing, and Donald Trump called him a weak, pathetic baby.

Others saw that phrase as anything but innocent — critics said it was designed to squash a nascent national conversation about police-related violence against African-Americans by switching the subject.

Five things to know about The Tenors

— Since their formation in 2007, The Tenors have performed more than 500 concerts on five continents and made over 150 television appearances, including at the 2014 Stanley Cup finals, the Opening Ceremonies for the 2010 Vancouver Winter Olympics and the 2012 Emmy Awards.

— The group, formerly known as The Canadian Tenors, created its latest album "Under One Sky" over an 18-month period and it was recorded in Ontario, Los Angeles and Nashville with seven producers.

— The Tenors' third album in 2012, entitled "Lead With Your Heart," won a 2013 Juno Award for Adult Contemporary Album of the Year.

— The Tenors — Clifton Murray, Fraser Walters, Remigio Pereira and Victor Micallef — performed for Queen Elizabeth in May during her 90th birthday celebration at Windsor Castle.

— The singers plan to launch a 70-city North American tour in September.