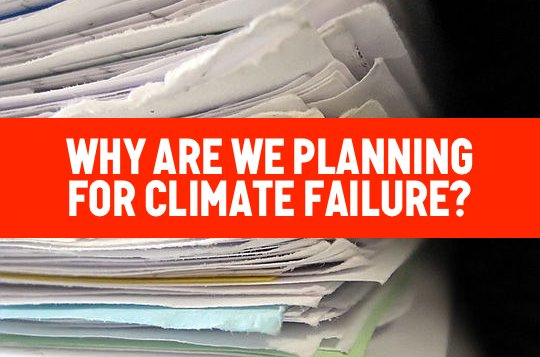 Distracted by the great national nightmare of carbon pricing soon to descend over us, most Canadians probably aren’t paying much attention to more technocratic machinery-of-government energy issues.

But by the end of the day on Wednesday, the feds will stop taking input on the “terms of reference” for modernization of the National Energy Board as well as reviews of environmental assessments, the Fisheries Act and the Navigation Protection Act.

It’s not exactly the sexiest news item you will come across today. But it’s pretty important that the machinery of government aims to achieve the right goals.

If we don’t change direction, we’ll end up where we’re headed.

It’s the age old difference between theory and practice. In principle, Canada has joined with the rest of the world and sworn to end the use of fossil fuels within the next few decades. As a developed nation, we have committed to move ahead faster than developing countries.

But in practice, agencies like the National Energy Board and processes like environmental assessments just keep on keeping on. They don’t incorporate the climate goals of government into analysis or decision-making. They are not mandated to manage the fossil phase out, or even to provide clarity on whether they are designing a world that is 1.5 degrees hotter, 2 degrees hotter or much, much worse.

Without a very serious overhaul, we’ll keep on with a National Energy Board bristling with the powers of a federal court, fully in the tank for the oil and gas industry it is meant to regulate, operating secretively and unsafely.

It’s not entirely clear the feds are looking for a serious overhaul. According to the proposed terms of reference, the “modernization” is slated to occur “pursuant to the NEB Act.” Yes, that same act torqued by Stephen Harper’s odious omnibus bills. If we’re going to get serious about modern energy planning, we certainly cannot have the review panel just tweaking things within the bounds of the existing act.

The terms of reference do not address the need for an authentic “climate test” incorporating the global scenarios in which projects do or do not make sense. A world in which we allow two degrees of global warming? Four degrees? Let’s at least be clear.

And what about the new relationship with First Nations? The terms of reference do not include the government’s commitment to “free, prior and informed consent” for First Nations.

The National Energy Board and environmental assessment process are profoundly broken. The public doesn’t trust them, and for good reason. They lack integrity and are not aligned with the goals of government.

Fundamentally, they are planning for climate failure.

The feds deserve praise for launching the reviews, promising to modernize the regulator and restore integrity to energy and environmental planning. Let’s make sure we plan for success and not restrict their terms of reference.

We really need a Royal

We really need a Royal Commission on the topic of energy. That will take a long time, but meanwhile the NEB needs to be stripped of its obedience to the fossil fuel industries, and some of its excessive powers removed. Environmental reviews should be returned to the Department of the Environment (and Climate Change).
Any substantial NEB report needs to be subjected to reviews by independent academics before acceptance.

Basically, this opinion is

Basically, this opinion is reasonable although I feel it is not harsh enough. On October 20, 2015, my view was that the first action the new government should take was to reverse the changes to Federalenvironmental legislation, The Fisheries Act and the Navigable Waters Act that had been gutted by the Harper omnibus budget bill(s). That didn’t happen.

I realize the climate change file was in trouble when the new government declared that the environmental assessment processes already started would continue under the rules set at the time they were started. That essentially meant carrying out environmental assessments based on rules developed by the Harper government at the whim of Enbridge, a company that was trying to soften the path for the Northern Gateway pipeline.

Today the mainstream media tends to be filled with whining from the oil industry, the Alberta government and the Saskatchewan government about the harshness of the rules. This is ludicrous. As pointed out in the opinion piece, the current rules will get us nowhere with respect to climate change.

The National Energy Board must be completely overhauled both with respect to mandate and personnel. As demonstrated in a series of articles in the National Observer, the NEB basically cringes before the will of the pipeline industry..

Time is short. If action is not taken, Canada will never meet its targets for the reduction of greenhouse gases or clean energy.