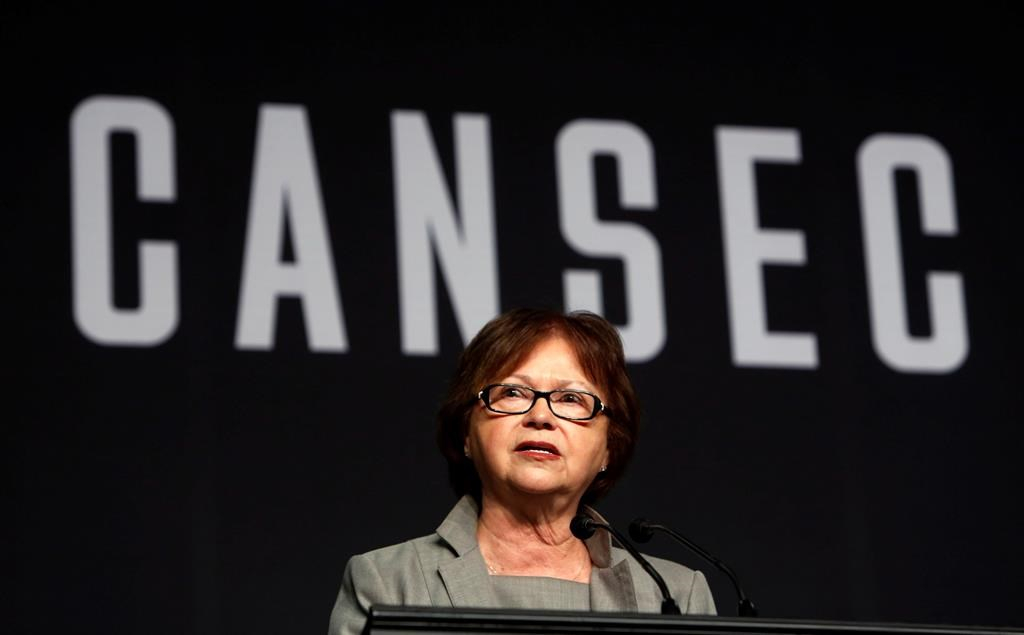 Public Services Minister Judy Foote speaks at the Cansec expo in Ottawa on May 26, 2015. File photo by The Canadian Press.
Previous story

As the federal government was scrambling to make sure hundreds of civil servants get paid this week, the opposition parties joined forces Monday to call for emergency hearings into the government's problem-plagued new payroll system.

Newly released documents from one of the government's biggest departments show that questions about "critical defects" in the so-called Phoenix system were going unanswered just weeks before its scheduled launch.

Both the Conservatives and New Democrats demanded the government operations committee be recalled to talk about how Phoenix has resulted in tens of thousands of civil servants being improperly paid —or not paid at all.

"I would hope that Liberal committee members would welcome an opportunity to examine what lead to this fiasco, why it has taken so long to get clear answers, and why we have yet to receive clear timelines for resolution of numerous problems," NDP public works critic Erin Weir said in a statement.

"In any workplace, we would expect the employer to pay its employees correctly and on time without compromising their personal information. It's embarrassing that the Canadian government is not meeting these basic obligations."

Even though a Conservative MP heads the committee, the opposition parties were one member shy of forcing a meeting without the help of the Liberals.

House of Commons rules require at least four members to sign off on a written request for a meeting, and the committee has three opposition members, not including Conservative MP Tom Lukiwski, who sits as its chairman.

The Commons clerk had yet to receive a formal request Monday, let alone one with four signatories, said Lukiwski.

"We are truly disappointed to see the Liberal members of this committee ignore our request to convene an emergency meeting," said Conservative public services critic Steven Blaney.

"After reaching out to their offices, and receiving no response, it is clear that this issue is not a priority for them."

Prime Minister Justin Trudeau said last week that the clerk of the Privy Council, which advises him and his cabinet on government operations, would head up efforts to fix the system, which has left more than 80,000 civil servants facing pay issues.

That figure includes 720 government employees who haven't received paycheques at all, in some cases for months, forcing many to borrow money or max out credit cards to pay their bills.

The government has promised nearly 500 of those employees that they would receive paycheques by this Wednesday, but acknowledged fixing the pay problems for the others could take months.

Officials were expected to provide an update by Thursday on progress toward resolving the issues.

Public Services Minister Judy Foote said she believes the system's failings are rooted in inadequate training. But the union representing nearly 600 employees at the government's centralized pay centre in Miramichi, N.B., is disputing that.

Centre employees have complained of problems with the software the previous Conservative government purchased from IBM to manage its compensation system, said the Public Service Alliance of Canada.

A memo to the deputy minister at Employment and Social Development Canada in March — less than a month before Phoenix was to "go live" in April — revealed frustrations with the pay system, and an apparent lack of communications between the department and those responsible for the launch.

"The final round of testing was completed recently but we are still waiting for the Phoenix team to provide a final analysis of their results, which could finally eliminate all ESDC's critical defects," said the memo, which was obtained by The Canadian Press under the Access to Information Act.

The note went on to say the department had identified "workaround solutions" that could be used once the system was implemented.

Officials apologize as more than 80,000 civil servants have issue getting paid