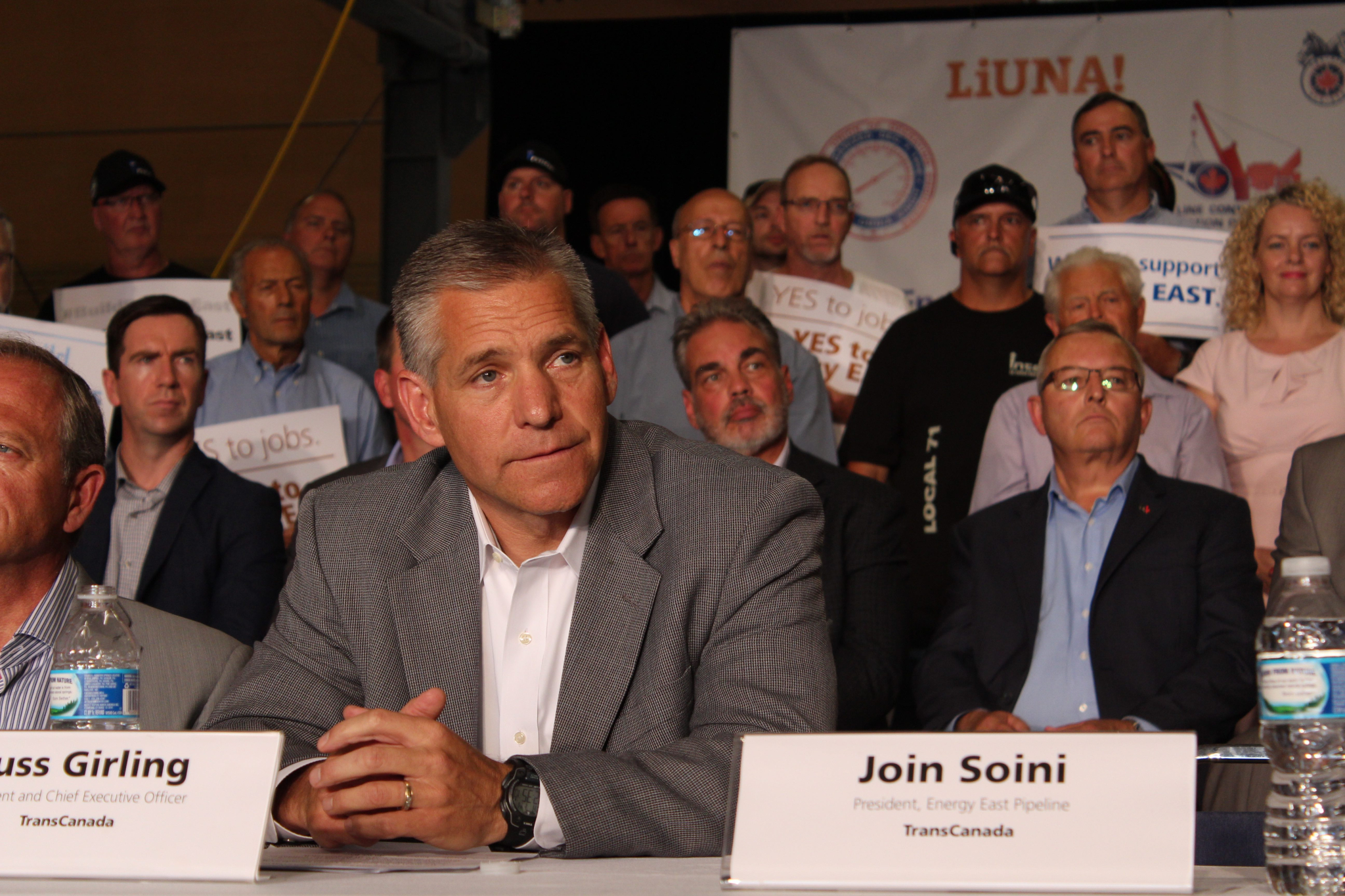 Major Canadian and U.S. environmental groups say Atlantic whales would be threatened by increased oil tanker traffic and are aiming for tanker restrictions as part of their latest effort to block a major pipeline proposed by energy giant TransCanada Corp.

The Calgary-based company wants to build a major cross-Canada pipeline called Energy East that would ship up to 1.1 million barrels of oil per day from Alberta, Saskatchewan and North Dakota along a 4,600-kilometre route, mainly for export off the Atlantic coast. A report by North American environmental groups estimates the pipeline would drive up tanker traffic as much as 500 per cent.

Fin and Right Whales among species at risk

Pipeline and oil companies say the project would be a safe way to help the industry expand and create jobs. Environmentalists from U.S.-based Natural Resources Defense Council, Oil Change International, Greenpeace and Canadian groups such as Quebec-based Équiterre and Toronto-based Environmental Defence disagree, arguing that environmental risks are too high for sensitive coastal areas and iconic species such as the North Atlantic Right Whale and the Fin Whale.

They say that the new pipeline and resulting tanker traffic would increase the risk of catastrophic spills, tanker-animal collisions or deafining ocean noise that could harm these species.

"We have been talking to marine mammal experts, who are very worried," said Steven Guilbeault, a senior director at Équiterre.

TransCanada's pipeline proposal has run into trouble over whales before. In April 2015, the company agreed to drop plans for a port in Cacouna, Quebec following protests over the fate of endangered beluga whales of the St. Lawrence. There are now as few as 1,000 Southern belugas, down from their historic high of 10,000.

NRDC, one of the leading opponents of TransCanada's ill-fated Keystone XL pipeline proposal, also wants a national moratorium on any supertanker carrying diluted bitumen — the fuel derived from Canada's oilsands sector — in U.S. waters. The group said that it has already obtained 80,000 signatures in support of its proposal in the past week.

TransCanada spokesman Jonathan Abecassis noted that the proposed pipeline would carry 40 different types of crude, not just from the oilsands.

"TransCanada is a pipeline transporter – we do not own or operate ships for the delivery of oil," Abecassis said. "Our customers determine the destination of their oil. We do note that there are comprehensive rules around marine tanker activity. Transport Canada as well as the other government agencies overseeing those activities could probably offer more information to that effect."

But Guilbeault said that last week's Husky Energy pipeline spill in Saskatchewan, which threatens local drinking water, shows why projects such as Energy East must never be built. The city of Prince Albert recently declared a state of emergency over the pipeline spill, with blobs of oil continuing to spread across the North Saskatchewan River, threatening drinking water supplies for up to two months.

"The minute that oil comes to contact with water, it’s a nightmare to clean up," Guilbeault said. "If a spill was to happen in the Saint Lawrence River, the Gulf of Saint Lawrence or the East Coast, the ramifications could be catastrophic for tourism, fisheries, wildlife habitat."

Tanker traffic to increase 500 per cent

The Canadian and American groups released a new report that estimated the Energy East project, if built, would increase oil tanker traffic from Saint John, New Brunswick down the Atlantic coast by up to 500 per cent. The report also said that the pipeline would result in expanded oilsands production in Alberta that would exceed greenhouse gas emission targets of the provincial NDP government's new climate change plan.

Guilbeault said that TransCanada has submitted evidence at Quebec environmental hearings suggesting that it could ship up to 270,000 barrels of oil per day down the Saint-Lawrence River, through the heart of the province, as part of the Energy East project.

Keith Brooks, campaigns director at Environmental Defence, suggested that the federal government should consider expanding on an existing pledge to ban tankers off of the coast of British Columbia.

“The federal government says tar sands oil doesn’t belong in the Great Bear Rainforest or the North Coast of B.C.," said Brooks. "The boreal forest of eastern Canada and places like the Bay of Fundy on the Atlantic coast are no different.”

But Abecassis, from TransCananada, countered that safety was the company's top priority and that its proposed marine terminal would have a number of safety measures going above the requirements set by the International Maritime Organization. These would include the mandatory use of certified pilots for the Port of Saint John, the use of assist tug boats to facilitate berthing and departure maneuvers, advanced navigational and docking technologies and a revised traffic separation scheme to ensure safety.

"We are working in collaboration with local authorities and first responders during the development of our emergency plan to ensure that the plan is adapted to local circumstances with resources placed strategically across the route to react quickly in the unlikely event of an emergency," said Abecassis.

"Pipelines are the safest way to transport the oil we need in our daily lives, and TransCanada is an industry leader in testing, developing and deploying technologies for leak detection, pipeline construction and integrity management."

TransCanada invested $1.5 billion on its integrity maintenance programs as well as $45 million in research and development, he added.