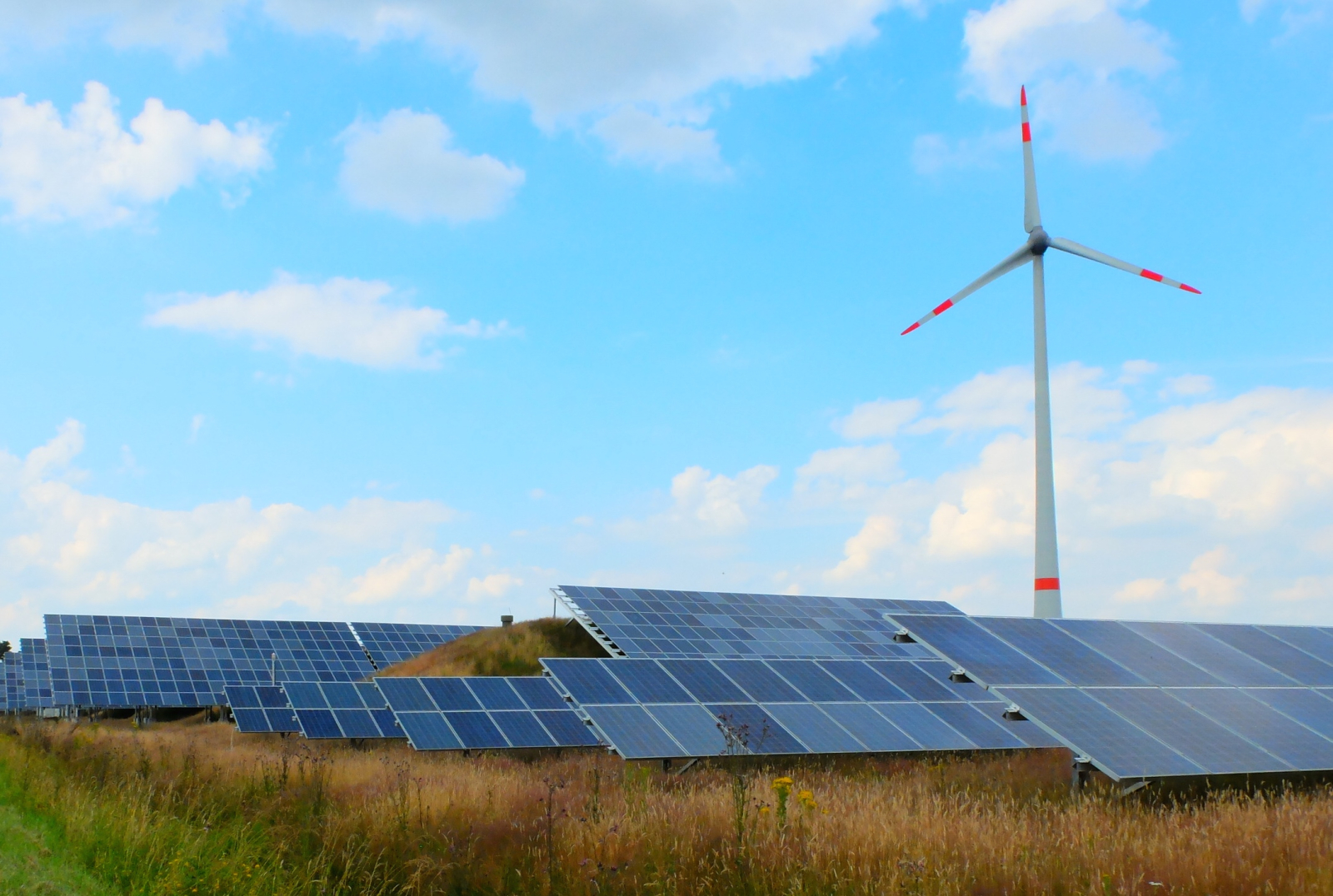 The German town of Saerbeck is a swords to solar panels story. Above this former German military ammunition camp, perched atop a metal stem like an oversized stalk of wheat, giant blades rotate in the sky, given life by an invisible breeze.

The wind turbine could be the icon for the Saerbeck “Climate Community,” a champion of energy democracy that was twice awarded the European Energy Award, and received the German Sustainability Prize in 2013. This town of 7,200, in the industrial heartland of Germany, is a thriving example of the nation’s much-lauded transition toward renewable energy. The energiewende includes a total phase-out of nuclear power by 2022 , and has catalyzed a tenfold increase in the share of clean electricity since 1990. By 2015, 32.5 per cent of Germany’s electricity was renewable.

In 2009, Saerbeck decided to shift its electricity entirely to renewable sources by 2030. Within just five years, they were generating 3.5 times more renewable electricity than the town consumed, not only with the installation of solar panels on private roofs, but through a 90-hectare, 70-million-euro Bioenergy Park that now houses seven wind turbines, a biogas plant, and a sprawling array of solar panels on the roofs of former military bunkers.

These camouflaged bunkers look like charming rows of grass-hatted hobbit holes, but were built to house tank ammunition and grenades. Today they provide the physical foundation for achieving local energy security and self-sufficiency—since 2012, Saerbeck’s entire electric grid has been owned by the community—as well as a canvas for the psychedelic shadowplay cast by the rotating turbine blades.

Key to success: “a project of the people”

The key to Saerbeck’s success, explained Mayor Wilfried Roos, is the grassroots nature of these projects, which were conceptualized at weekly community meetings, and have brought in revenue for the town and local investors, as excess energy is sold back into the grid.

Roos, an economist who jets around town in a silver electric car—a months-old BMW 225xe he is proud to display—could have sold the bioenergy park to foreign investors for millions of euros, said Saerbeck’s Technical Manager Guido Wallraven. Instead, he saw energy production as a “project of the people”.

Energy should be subject to a similar kind of local control and responsibility as schools, road and social services, Roos believed.

“As policymakers, we don’t want to just set targets. We want to make sure all the residents are on board,” said Roos. It’s a democratic sentiment that has been lucrative as well: with the municipality running one of the wind turbines, local farmers operating the biogas plant, and local investors funding much of the rest, the revenues are also enriching the local budget and economy. “We believe in the future it’ll be more competitive to use local heat and energy.”

A bunch of PIMBYs (Please, in my backyard)

At the center of the town’s transformation is the local energy cooperative Energy for Saerbeck, co-founded by Roos, which owns the solar plant and a turbine in the Bioenergy Park. By investing in the cooperative (the minimum amount is 1,000 EUR), local townspeople become voting members and earn profits. Since its founding in 2009, the cooperative’s membership has expanded from an original nine members to 384 today. More residents are eager to join—if only the coop could keep pace with enough new projects.

Wallraven credits the opportunity to invest and participate for the townspeople’s embrace of the transition, which some scholars describe with the cringe-worthy acronym “PIMBY”—“Please, In My Backyard”—or, in corporate jargon, as the achievement of “social acceptance.” “The cooperative has been a very important strategic instrument to get the people on board,” said Wallraven.

North Americans have not yet embraced the energy transition with a similar degree of enthusiasm, as PIMBY’s sinister alter-ego NIMBY—“Not In My Backyard”— has continued to stall renewable energy developments in Canada and the US. Although three-quarters of Canadians support a shift toward renewable energy, and increasing wind energy to around a third of the nation’s electricity supply would benefit the Canadian economy, a recent University of Ottawa study noted that wind opponents often complain about wind farms being run by companies with no ties to local communities.

Is local, small-scale ownership the key to an energy transition?

In Germany, the energiewende has largely been fueled by small and mid-sized investors. Citizen participation accounted for 46 per cent of the nation’s renewable energy capacity in 2012, and there were 973 electricity cooperatives running by 2015.

For decades, the German electricity market had been dominated by a monopoly of a few big utility companies, but their breakup after 1998 created space for new electricity producers to emerge. When they did, they arrived in the form of citizens, small businesses and local investors, encouraged by laws guaranteeing their right to sell electricity back into the grid for twenty years at a fixed price—what’s known as a “feed-in tariff.” This provision, which offered security and healthy returns in a nascent and still-uncertain industry, has been crucial for the energiewende, according to most experts.

As these new solar panels and wind turbines fed more electricity into the grid, the use of coal and gas-fired electricity plants declined, making them more expensive to operate, explained Heinz-Josef Bontrup, a professor at the Westphalian Energy Institute who studies the energiewende. “The big utilities should have seen it coming, but they didn’t.” Today, the remaining big utilities—E.ON, RWE, Vattenfall, EnBW—are in crisis, reporting billions of euros in losses, in what the CEO of RWE, Peter Terium, has called “the worst structural crisis in the history of energy supply.”

An end to the cooperative era?

But this era may also be nearing its end: in 2017, the feed-in tariffs will be replaced by an auction system where renewable energy operators bid for contracts to sell their electricity at the lowest price. This will make it riskier to install new plants, especially for small operators like local coops, who will have no guarantee of a contract backing their plans.

The federal government argues that a market-based system, as envisioned by the European Commission, will lower electricity prices from renewables and thereby expand the energiewende.

“Unfortunately, we’re driving while using the brake,” said Bontrop, arguing that the reforms remove the exact mechanism that has propelled the energiewende to success. Already, pilot auctions on new solar have driven prices to record lows, and the vast majority of plants that submitted applications did not win contracts to sell their electricity. Bontrop foresees a failure for German climate leadership, “We will not be able to achieve the goals we agreed to last year in Paris.”

“This is actually a new political framework that doesn't work so well for our local projects,” said Guido Wallraven, who explained that cooperatives like Saerbeck’s would find it difficult to compete against big investors building much larger wind farms and solar parks, and therefore be able to use scale to drive down their prices. “The energy politics in Brussels really focuses on big companies, and not the more decentralized forms of renewable energy,” he said, referring to the European Union.

But is Germany’s decentralized policy the perfect model? One of its frequently-overlooked traits is plainly visible in Saerbeck. Its wide streets are well-kept and smooth, the yards lush and impeccably-groomed, and adorning the majestic houses, blue metal rectangles are carefully positioned off-center, Bauhaus-like, on the tiled roofs. Jörg Radtke, a research associate at the University of Siegen who has studied Germany’s community energy initiatives (including cooperatives), found that most investors and participants have been middle-aged, well-educated and comfortably well-off, with more than half investing at least €3,000 to participate in the energiewende—“a relatively high capital investment that effectively excludes lower income groups from engagement,” he wrote in a paper entitled “A Closer Look Inside Collaborative Action.”

This complicates the popular claim that the energiewende has democratized energy. While it has taken power out of the hands of the big utilities, local initiatives “often create little social capital,” as Radtke wrote. He also noted in an email that some energy cooperatives only require investments as low as 100 euros for membership, and that Germany’s energy cooperatives vary widely, with some including more members from poor and marginalized backgrounds. But most have not upended the social hierarchies of communities but instead reinforce the position of those who already possess the greatest means, without achieving what scholars call “energy democracy.”

“The problem can only be solved through public responsibility,” said Radtke in an email. That would involve bringing the utilities back under municipal ownership and control, he explained.

Bontrup is skeptical about the prospects for the municipal solution. “Most municipalities are too cash-strapped,” he said. “It doesn’t make sense for them to say ‘we’re going to build a new plant.’”

Nevertheless, Radtke argues that municipal ownership is the more just and equitable model. “This is a more legitimate approach to achieving ‘energy for the people’, because it can be influenced through elections and subject to local laws.”

And while they will find it more difficult to initiate new projects under the recent reforms, Saerbeck remains both a model example of a municipality that has taken ownership of its energy needs, and a grassroots “climate community” driven by investment and participation from local residents.

“The mayor is a very important face and mind of the climate community,” said Guido Wallraven of Mayor Roos. “But [Saerbeck’s energy transition] was done by the community: by the people themselves carrying out projects, making investments, and getting the returns.”

Editor's note: This article was produced through a workshop organized and funded by the non-profit media initiative, Clean Energy Wire. National Observer has full editorial control and responsibility to ensure stories meet its editorial standards.

Excellent article, thank you. It is exactly what we need to be doing and all money wasted on corporate welfare redirected to subsidies for small-scale renewables would be a good start.

Was that fancy BMW mined,

Was that fancy BMW mined, smelted, and manufactured with wind turbines, or is there a huge carbon footprint embedded in all the "clean" technologies that make them so superior?