Wind, tide or hydro, clean energy projects are not immune from local opposition 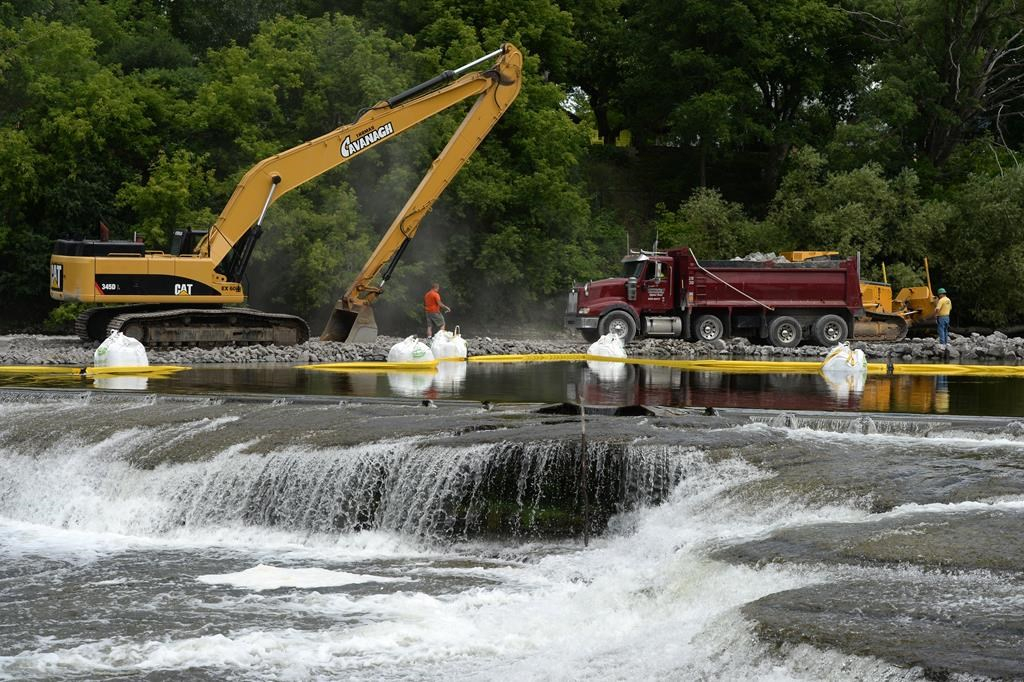 Construction workers start on a hydro dam expansion on the Mississippi River in Almonte, Ont., on Friday, July 15, 2016.
Previous story
Next story

It's barely 50 kilometres from the cascading falls on the Mississippi River in the picturesque town of Almonte, Ont., to the site of the 2016 North American Leaders Summit in downtown Ottawa.

You can draw a straight line that's arguably even shorter between the theme of last month's "Three Amigos" meeting at the National Gallery and a tiny, contentious hydro electricity project astride those Almonte falls.

"Canada has a tremendous amount of energy that comes from clean sources right now and we're always looking to create more."

A fortnight later, the first heavy equipment rumbled down onto the Mississippi riverbed to begin blasting a deeper channel in the rock for the existing mill race at the garage-sized Enerdu generating station, built into an old mill that has clung to Almonte's riverbank for a century.

The project, owned by a local construction company, has taken six years to launch, while dividing the town and somehow garnering international attention.

Ron Campbell, the project manager, walked a visiting reporter around the construction site in the first week of riverbed work while ruefully noting that the place would never look worse.

In a quietly emotional torrent that was part craftsman's pride, part bewilderment, part homespun logic, he recited the six-year saga of escalating opposition that included a 2014 municipal election and reached a social media crescendo over an endangered dragon fly species native to the area.

"Now we have (musician) Paul Simon against our (project) and Maude whatever-her-name-is," said Campbell, an apparent reference to Maude Barlow of the Council of Canadians.

"Everybody has a comment on a little tiny project in the middle of nowhere, with the wrong information. We're not destroying the falls. There was never a plan to destroy the falls. It's not going to happen."

Campbell doesn't want to relitigate the twists and turns of a bitter local fight, but says the battle raises a bigger question.

If an existing, run-of-river hydro project being redeveloped by a local company using local labour in a mill town founded by the river's power and still harnessed to another, municipally-owned generating station a stone's throw downstream from the Enerdu plant is getting public grief, what project will not? Even the new turbines purchased by Enerdu are designed and built by a local company headquartered literally across the street from the old mill.

It's the kind of question that just happens to preoccupy Monica Gattinger.

The University of Ottawa professor is the chair of a research project called Positive Energy, which the university website says brings together various policy players and academic disciplines to explore "how energy resources can be developed in a way that garners acceptance and benefits society at large."

The research group is currently completing case studies on community support and opposition to six different energy developments spread across Canada, with the final report to be released in earlier October.

In an interview, Gattinger noted Canada hasn't seen energy infrastructure skirmishes like today's since the first great pipeline debates of the 1950s, which helped bring down a national government.

"We're coming back to very similar kinds of infrastructure decisions — but in a very different societal context," she said.

Aggrieved Albertans may feel like there's a national conspiracy against the oilsands sector when they look at the furious pipeline protests, but opposition to energy projects of all descriptions, size and scope appear to be a 21st-century phenomenon.

Whether over wind farms, tidal energy prototypes, hydro projects or transmission corridors, local battles are raging across Canada on any given day.

Most Canadians will be familiar with the NIMBY acronym for project rejections — Not In My Back Yard — but researchers note other variants, including NOPE (Not On Planet Earth) and BANANA (Build Absolutely Nothing Anywhere Near Anybody).

Gattinger, who has researched and written on the topic extensively, rattles off the societal changes that have become particularly evident over the past decade:

— Declining trust in institutions and reduced deference to authority and expertise. Citizens, said Gattinger, "might trust their neighbour more than they trust what an industry executive has to say, or what governments have to say about particular energy projects."

— The shift to individual values from group or communitarian values. "People's line of sight is increasingly at the individual or local level and not so much at the group or national level," said Gattinger. "So appeals to the national interest are getting less traction."

— Falling tolerance for risk, particularly man-made risks. "What that can mean is that perceptions of risk can actually trump reality of risk in the context of energy project decision-making," she said.

Layer society's growing risk intolerance on top of lack of trust in industry and government, said Gattinger, "and it becomes much more difficult, frankly, to get anything built."

That was a problem for the previous Conservatives in Ottawa and it has pursued the new Liberal government into office.

"Together, we will advance clean and secure energy, with the goal of 50 per cent clean power generation across the continent by 2025," Trudeau, Obama and Nieto committed in Ottawa last month.

Set against that ambition, the additional 600 kilowatts from Almonte's Enerdu expansion — up from 300 kilowatts — is less than the condensation from a single drop in the bucket.

Ontario alone can produce almost 8,300 megawatts (8.3 million kilowatts) of hydro power annually, a healthy fraction of Canada's yearly capacity of 95,000 megawatts of renewable electricity, 83 per cent of which comes from falling water. In fact, hydro alone accounts for 60 per cent of Canada's electricity, and when other emissions-free sources are factored in, including nuclear, Canada's clean energy total rises above 80 per cent.

By the measure of last month's Three Amigos agreement, Canada is already well above the continental 50 per cent target and thus immediately improves the continental average, with the prospect of selling more clean electrical power south.

Canada enjoys a $3 billion trade surplus with the U.S. in electricity sales, said Sergio Marchi, president of the Canadian Electricity Association, and the country has the capacity to double or triple its exports.

Convincing skeptical Canadian communities to increase their current energy output to foster continental exports may compound what is already often a tough sell.

"Once you have a more comprehensive and deep local opinion, how do you balance local opinion with national need?" asks Marchi. "That task has not become easier because the inputs are so much more numerous."

"No form of development, electricity or otherwise, is immune," from public opposition, said Norris, "but in our industry it's not the norm."

Opposition, he said, is "site specific, it's project specific."

And the objections frequently pit environmentally conscious protesters against "clean" energy projects that are being directly encouraged by provincial or federal policy incentives.

In Almonte, Mississippi Mills mayor Shaun McLaughlin won office in 2014 on a platform opposing the Enerdu expansion. McLaughlin said the new plant will regulate the river level and damage trees in a large swamp about eight kilometres upriver.

"Is it a green project when you're killing off a wetland?" he asked.

He also cited the endangered rapids clubtail dragonfly. "Is it a green project when you're messing up the habitat of a critically endangered species? What really is green?"

McLaughlin says the risks outweigh the benefits of adding such a small amount of new power to a grid that's already well supplied.

Campbell, back at the Enerdu construction site, sounds worn out by engagement.

The delays mean that by the time the project starts generating electricity and revenue, likely early in 2018, the company will have just 13 years left on its 20-year supply contract, which had to be signed before the province would greenlight the redevelopment. The $10- to $12-million investment won't pay off for 17 to 20 years, said Campbell.

"Power production inevitably is going to be a federal issue, as pipelines are," said the construction manager. "There has to be something for the greater good of the country. We can't have a borough in Montreal deciding that a pipeline can't be built."

Gattinger said all those societal pressures are setting the table for a rough ride on the coming energy transition.

"I think it's going to be very difficult and the worst is yet to come," she said, laughing at her own grim prognosis. "My sense is it's only going to get harder."

Part of the problem is that

Part of the problem is that renewable projects are environmentally devastating in many cases. Dams are NOT good for to aquatic species, water quality, etc. Ask those affected by Site C or W A C Bennett dam, etc. Wind turbines are aerial blenders to avian species, destroy bats and produce noise in frequencies harmful to many species, including humans. They don't even work well in grids, but big corporations love the subsidies. We should be considering these projects from the environmental cost of the massive stock if raw materials, to creating, transporting and building. How much steel is used in these pipelines, etc? What about reducing energy use and ending the 'disposable' mentality? I see zero government leadership on that.

Excellent article.
I do suggest the article use watts and watt hours measurement units, not simply watts. They are not the same.