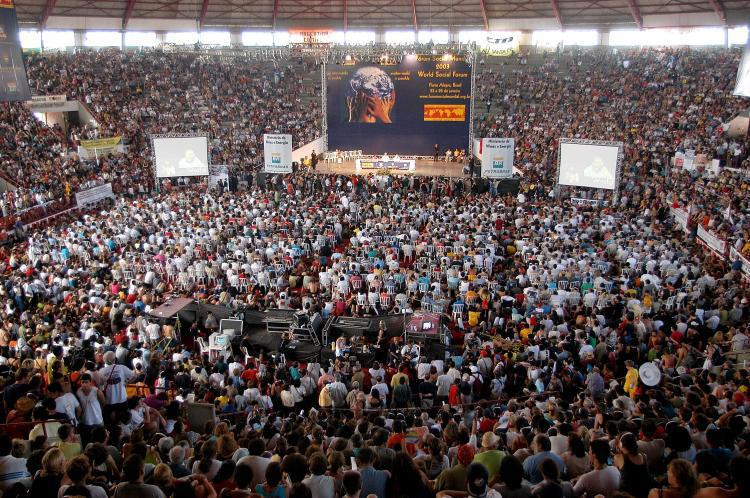 In Canada, as in much of the rest of the world, the left has lost a tremendous amount of ground since the World Social Forum was created 15 years ago. We now live in a world where the one per cent has huge powers, corporations dominate our lives, neo-liberal policies rein in the public, and where progressive governments have fallen in several countries.

The World Social Forum was created as a counter-balance to the World Economic Forum meetings held every year in Switzerland. Billed as the largest gathering of civil society to solve the problems of our time, WSF founders saw it as a vehicle to speak truth to power in a world where the wealthy are calling all the shots.

In view of these challenges, it is time for the WSF to seriously evaluate itself and its place in the world.

This year's WSF is in session in Montreal until Sunday, August 14.

More than 1,000 self-managed sessions have activists discussing and creating progressive alternatives to traditional political, economic and social policies that they will take back to their own countries.

While as many as 100,000 people have attended sessions some years in some developing countries, perhaps 10,000 are taking part in Montreal. Participants from the South found it too expensive to travel to Montreal. Some controversy has already risen after the Canadian government asked organizers to remove its logo from a list of sponsors in response to concerns about what critics felt was an "anti-Semitic cartoon" on the event's website.

Montreal was selected this year because it has been the site of strong social and political activism over the last few years.

The Forum is an exciting event writes John L. Hammond of City University of New York: “The scene bursts with energy as people who work on particular causes at home—feminism, the environment, indigenous rights, economic justice, human rights, AIDS treatment and prevention and many more—compare notes and strategies.

Networking, discussing key issues, and building alliances are the main activities at Forum sessions. The Forum can best be described as a “process”, an incubator facilitating new visions and ideas.

The activism bred at the WSF has supported change and revolution in several countries. It can take credit, in part, for the collapse of the World Trade Organization’s Doha round in 2003, the defeat of the Free Trade Area of the Americas, and exposing the harsh austerity programs of the International Monetary Fund and the World Bank.

Thousands of Canadian social activists have taken part in numerous WSF gatherings over the years. While this exposure has helped radicalized students in Quebec, it appears to have accomplished little in Eastern Canada. Even during the brutal years of the Harper administration, only a handful of unions and fringe radical groups advocated strong action.

The NDP and leading social movement groups, say the Council of Canadians, should have seen the need to explore alternatives to Canada’s corporate-dominated political system. But the NDP doesn’t even acknowledge the existence of neo-liberalism, the damaging centrepiece of right-wing politics.

While the Council of Canadians, the country’s largest social action group, has won praise for challenging voting irregularities in court, its “activism” is usually limited to holding protests and sending petitions to government.

The WSF movement has lost some of its radical edge over the years. Organizers have given in to some extent to the influences of government and the corporate world – initially the group’s main enemies.

Eric Toussaint, a Belgian political scientist and one of the ideologists of the WSF, has been concerned for some time that the movement is not independent enough.

“It worries me to arrive in Porto Alegre and see that the seminar “Ten years later” is sponsored by Petrobras, Caixa, Banco do Brasil, Itaipu Binacional, with several governments in attendance,” he said on the 10th anniversary of the WSF.

“I would much rather have seen a Forum with less financial means but more militant in nature”, he said.

The sources of funding for the Montreal event may be an issue for some participants. Organizers claim the gathering will cost $2.4-million. This includes $710,000 from various levels of government and another $287,500 from unidentified “solidarity and sponsorship supporters.”

Some of the more activist participants complain about the increase in attendance in recent years by Non-governmental organizations, which tend to be comfortable operating within the capitalist environment. Meanwhile, participation by indigenous groups, which are usually more radical, has decreased.

Where is the WSF going?

Perhaps discussions held in Montreal will lead to a reinvigorated and forward looking WSF.

Since its beginning, the WSF has held that it does not intend to be a body representing world civil society, and therefore does not directly take part in political struggles. However, after 15 years of facilitating discussions, there are concerns that the Forum could flounder if it does not move in new directions.

Pierre Beaudet, founder of Quebec NGO Alternatives, says there is “a recognized necessity for [WSF affiliated] movements to seize with both hands some major issues . . . . At this moment, the Forum could open up the self-organized convergences and go further than just producing a mixture of ideas which has characterized it thus far.

Adds Beaudet: “The difficulty, of course, is to identify the points of convergences, which is certainly not easy to do, considering the incredible diversity (which also comes with an incredible richness) of the participants from social movements.”

With its access to tens-of-thousands of activists, the Forum is the only progressive assembly in the world with the potential to facilitate co-ordinated action on a global scale on crucial issues, such as global warming, neo-liberalism, and life inequalities.

If the massive body is to begin changing direction in Montreal, it likely will have to overcome two obstacles.

The other potential obstacle concerns leadership. Some of the men who have been at the forefront of the WSF movement for all of its 15 years are still there. Much has changed since then. Will new leadership emerge to work with the old guard to allow the WSF to retain the best of its past and also move in a new direction?