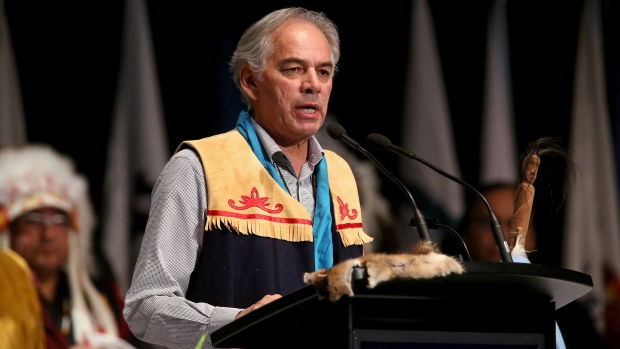 Ghislain Picard, Chief of the AFNQL "it is more than time to put an end to this process" Photo: Canadian Press
Previous story
Next story

The Energy East pipeline hearings are in shambles. The National Energy Board has suspended the hearings until it decides whether panel members should step down over accusations of bias arising from National Observer’s investigation into the Charest affair.

On Wednesday, the Assembly of the First Nations of Quebec and Labrador called for the Energy East process to be shut down, setting the stage for a full confrontation between the feds and aboriginal peoples if the pipeline proposal proceeds.

Even the normally pro-pipeline editors of the Globe and Mail have called for the panelists involved in the Charest affair to be removed. But that’s almost certainly not enough to stop the bleeding. It’s the NEB itself that will decide what to do with its panelists. And the head of the NEB attended the private meetings in person.

The NEB could decide to keep its panelists in place and reconvene hearings (virtually or with better security). Its dubious credibility would be in tatters.

Imagine a scenario in which the NEB replaces the panelists but tries to soldier on with its chairman in place. The same chairman who saw so little wrong with the private meetings that he joined the Charest meeting himself. Doesn’t pass the smell test.

This week’s meltdown comes at an extremely awkward juncture. The federal government has recognized that the pipeline regulator is broken and is in the midst of a process to “modernize” its mandate and structure. But the NEB is simultaneously in the midst of evaluating the biggest pipeline proposal in the country’s history.

Modernizing the NEB after the Energy East process seems a classic case of closing the barn door too late. Even a modified version of the current process appears destined for massive confrontation with First Nations as well as civil society in Quebec and beyond.

Scrapping the process until a 'modernized' NEB can start over with new leadership would be bitterly unpopular in Alberta and among the broader business community.

The Trudeau government might prefer to stay at arm's length and hope the whole thing burns away in a dumpster fire of the NEB's own making. That's looking less and less tenable.

We're screwed. Even our

We're screwed. Even our government Environment representative McKenna wants to limit carbon emissions and expand tar sands at the same time. Say goodbye to planet Earth. Bill McKibben was correct when he said nature is dead 20 years ago.