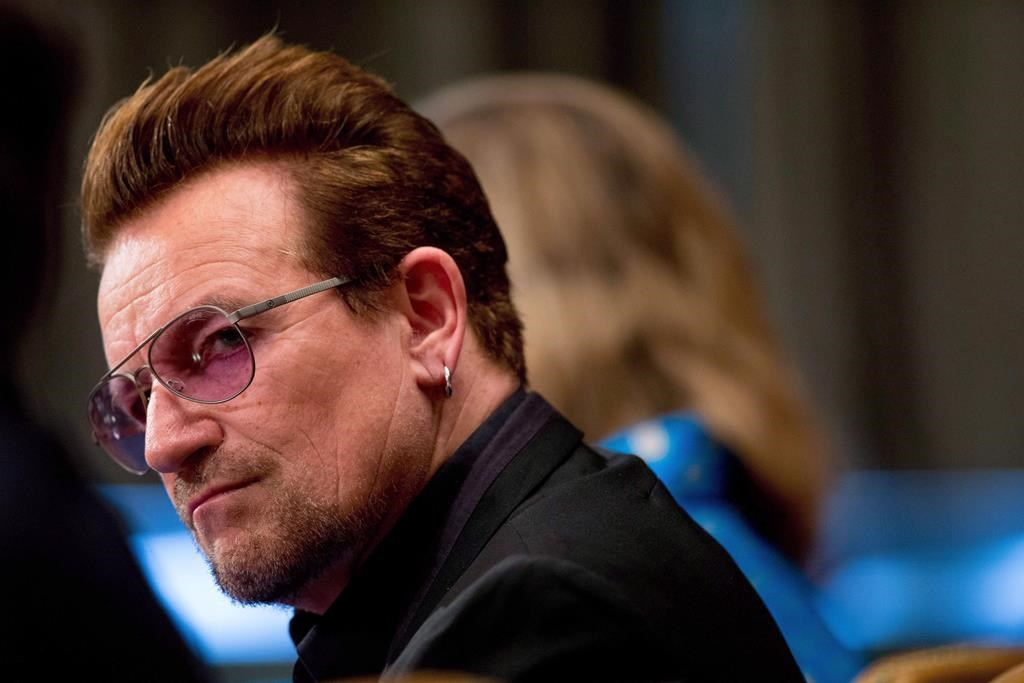 U2 frontman Bono is urging Justin Trudeau to resist ruling out a foreign-aid boost to help Canada meet a United Nations development target, even though the Liberal government has deemed it too ambitious.

In an exclusive interview with The Canadian Press, the Irish rock star praised Canada for showing an openness to the world at a time when many countries have been retreating deeper into isolation.

But Bono, who will meet Trudeau this weekend at an international-aid event, said while he recognizes the UN's recommended spending objective is a difficult goal — he hopes the prime minister doesn't push it aside.

The UN target challenges countries to dedicate at least 0.7 per cent of their gross national income to foreign aid.

Canada, however, was well below that mark last year when it committed 0.28 per cent of its GNI to development assistance, according to the Organization for Economic Co-operation and Development.

"I would ask the prime minister not to let go of it and I think for Canada to have it as a kind of light ... have it as a kind of beacon of hope," Bono, a long-time crusader in the battle against AIDS and extreme poverty, said in a telephone interview from Los Angeles.

"Not just for the people whose lives depend on those Canadian dollars, but actually for Canada itself to have that place in the world.

"I think that's a wonderful aspiration."

Bono will appear alongside Trudeau, Microsoft's Bill Gates and actress Danai Gurira at an event Saturday in Montreal, where the prime minister will also host a conference for the replenishment of the Global Fund. It's an international partnership focused on eradicating AIDS, tuberculosis and malaria.

Trudeau has committed $785 million from Canada over two years to the Global Fund — a 20-per-cent increase.

"We're always looking for more," Bono said of Canada's pledge, before adding he believes Canadians will give broad support to such a cause as long as they believe their money is well spent.

"I think that Canadians are, in a way, quite unromantic in their idealism. You know, they're sort of quite practical and pragmatic. I like to think I am, too."

Bono is co-founder of ONE Campaign, a global organization with 7.5 million members that's dedicated to ending extreme poverty and preventable diseases, especially in Africa.

He has also encouraged the global community to meet the UN's 0.7-per-cent goal.

The Paris-based OECD, which ranked Canada among 28 countries based on their development assistance, found only the United Kingdom, Netherlands, Denmark, Luxembourg, Norway and Sweden attained or surpassed the 0.7 level. The average contribution was 0.3 per cent, the OECD said.

Federal International Development Minister Marie-Claude Bibeau has called the 0.7 target too ambitious because she said reaching it would cost Canada an extra $10 billion per year.

Bono has publicly challenged Canada on its approach to foreign assistance in the past.

Over a decade ago, Bono applauded then-Liberal prime minister Paul Martin for his vow to hike Canada's foreign-aid commitments to 0.7 per cent by 2015.

But after Martin later broke the promise to boost assistance, U2's legendary lead singer called him out during a 2005 concert in Vancouver.

"Enough! Enough! Enough of despair! No more! So Paul Martin, I'm calling you!" Bono shouted into the microphone. A phone number appeared on the big screens above the stage encouraging the audience to call Martin to voice their concerns.

Looking back at the incident, Bono said it was "a little embarrassing" for him because he broke a commitment of his own to steer clear of party politics.

"It's not personal, I have to be true to our base and Paul Martin was, and is, a fantastic person and a very gifted leader — I'm sure he did the very best he could," Bono said when asked whether Trudeau will be on watch to fulfil his own vows.

"I'm with a bit of wisdom now and I can say I think it's more our duty in the ONE Campaign to be wind at the back of people — of politicians and lawmakers — who make courageous decisions. And we have to be there for them."

He said he is still getting to know Trudeau, but added he has been encouraged so far.

Bono credited Canada for being a world leader in "multilateralism and diversity" at a time when post-Second World War institutions like the UN, NATO and European Union "are being whittled away."

He said Canada stands out on an international stage "filled with a lunacy that we haven't seen in years in terms of hard-left, hard-right uprisings against common sense."

Bono, Jolie, Clooney, Di Caprio and their ilk should stick to their day jobs. With hundreds of millions banked, private jets, and mega-mansions with high security, their egos are so distorted they believe they are entitled to dictate to the world. They are mistaken. Until they have spent all their $$$$$ to support their pet projects (and fly with regular airlines) they are just pathetic attention-seeking hypocrites.

While here, he should get a

While here, he should get a VIP tour of our rich nation - starting with indigenous and Inuit communities. (Please take food & bottled water along for those rich folks!) Then visit some famous landmarks, like the DTES homeless, shelters, food banks, visit those starving on disability or CPP. We owe close to a TRILLION dollars, borrowing billions more monthly just at the federal level. When the finances of a person look like that, credit is cut off. Yet every level of government, plus a large part of the population are drowning in debt and spending like it's Boxing Day. It is national crisis and being encouraged in the name of "growth" for an economic model that is enslaving taxpayers and destroying the planet. When rich corporations also get billions in welfare and over $270 billion from Canada was sent to the top 10 tax havens alone over the last 15 years, this "rich"country looks like something else entirely. I'd like Bono to get that message and take it to the world stage.