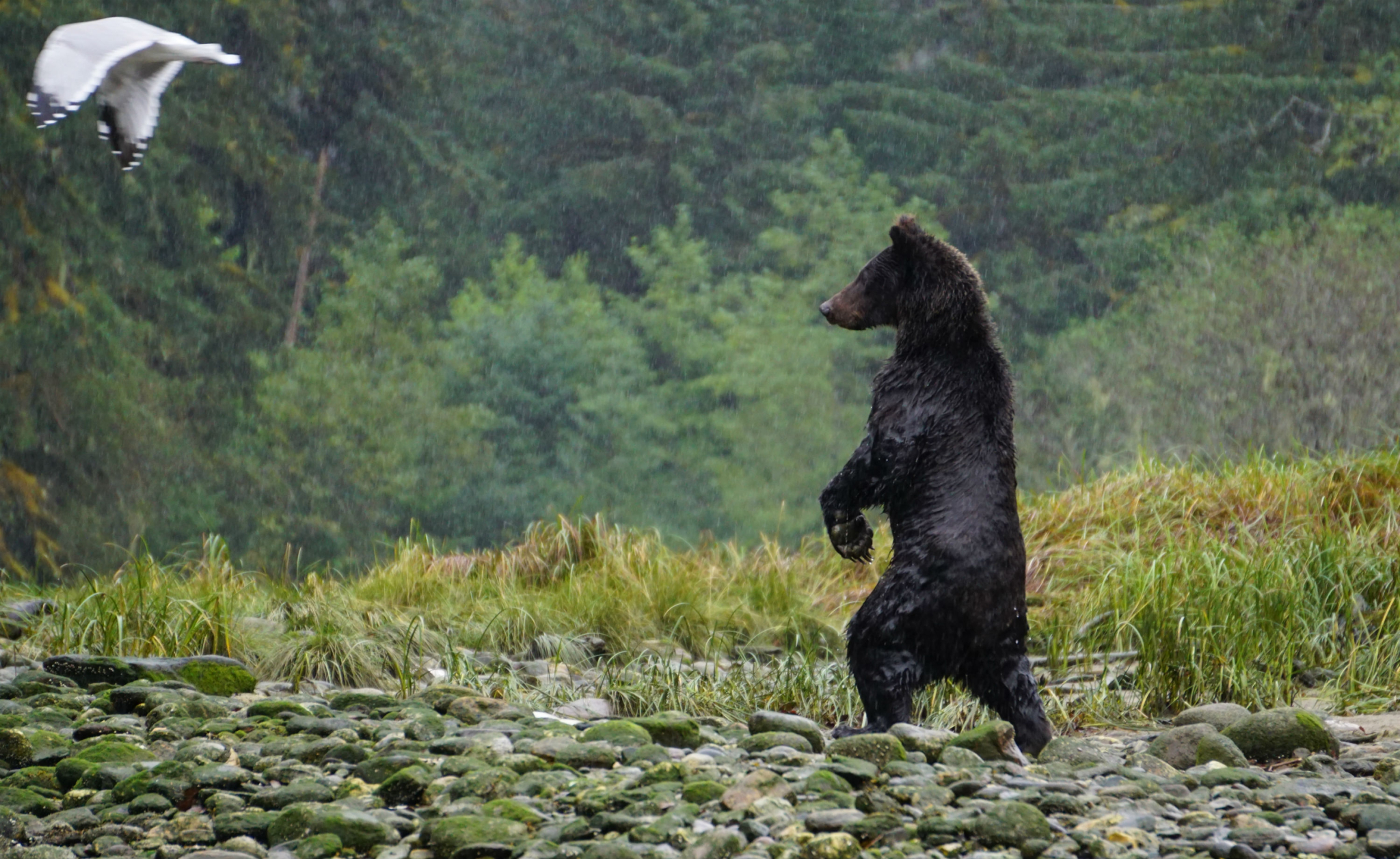 A young male grizzly makes sure the coast is clear before diving into a salmon river in the Great Bear Rainforest, Wed. Aug. 31, 2016. Photo by Elizabeth McSheffrey.
Previous story
Next story

Four private parcels of land have been added to protected zones in the largest coastal temperate rainforest left on Earth, ensuring their permanent protection from commercial logging, conservationists announced Thursday.

In a ceremony hosted in Vancouver, representatives from the Nature Conservancy of Canada, the federal government, and other donors added nearly two square kilometres of private land in British Columbia's remote Great Bear Rainforest to critical conservation projects that ensure their long-term protection from the timber industry. Three of the four parcels were donated by local landowners, Tony Allard and his family, to the Nature Conservancy, which will work with Indigenous, government, and corporate partners to ensure their conservation for years to come.

"These four new conservation areas enhance the extensive network of conservation lands in the Great Bear Rainforest, and with the estuaries and old-growth forests, are key pieces of an ecological puzzle that needs to stay intact in order to remain viable," Nature Conservancy of Canada president and CEO John Lounds told audience members.

"The Nature Conservancy of Canada is very proud to collaborate with the Heiltsuk and Wuikinuxv First Nations in the ongoing care and management of these new conservation areas."

The Great Bear Rainforest is a vast and truly stunning coastal temperate ecosystem, stretching 64,000 square kilometres from the northern tip of Vancouver Island to Alaska. Its waters are home to playful fin, humpback, and killer whales, while its lands are roamed by grizzlies, black bears, wolves, and the rare white Spirit Bear — an elusive predator found nowhere else in the world.

The announcement on Thursday comes on the heels of a legally-binding landmark conservation agreement earlier this year that protects 85 per cent of the rainforest from commercial logging. It was finalized after two decades of heated negotiation between First Nations, the provincial government, loggers, and environmentalists, and is a culmination of several prior conservation agreements and land-use planning models.

The four new additions would not fall under this conservation agreement, but will have guaranteed protection from the Nature Conservancy, supported by federal partners, TD Bank, First Nations and the Allard family. Allard could not attend the Vancouver announcement, but issued the following statement to the press on donating his land to the cause:

"Spider Island is such a special property — remote out there on the edge of the world — and the Heiltsuk deserved to know it would not be developed. 'Forever' is a big idea and in the case of these three properties, it is very satisfying to know that they will always remain as they are now."

The new protected parcels — Gullchucks Estuary, Spider Island, Geldade and Kiidiis — include old-growth trees, spawning rivers for all five kinds of Pacific salmon, breeding grounds for water and migratory birds, and feeding grounds for large carnivores and other marine mammals. They fall within traditional Heiltsuk Nation territory, a First Nation that has lived in the region for thousands of years.

The entire Great Bear Rainforest ecosystem was recently dedicated to the Queen's Commonwealth Canopy, a pan-Commonwealth forest conservation initiative, and will be visited by Their Royal Highnesses The Duke and Duchess of Cambridge during their B.C. tour later this month.

The conservation news also comes days after an announcement from Coast Funds, the conservation financing organization born of the 2006 Great Bear Rainforest Agreements, that First Nations whose traditional territories lie in the rainforest are investing more than $200 million into local, conservation-based economies.

Coast Funds was created to ensure that the conservation vision for the entire rainforest included the well-being of Indigenous communities who have lived there since time immemorial, and provides them with the cash to ensure sustainable protection of their cultural, economic, and natural resources. Over the last 10 years, more than 250 projects have arisen from funds directed towards the cause, including the start-up of the Haida Taan Forest operations, the commercialization of the Kitsaoo/Xai'xais' Spirit Bear Lodge, and the establishment of the Heiltsuk's stewardship department.

“In a short period of time we’ve succeeded in launching a diversity of new businesses and conservation initiatives that are strengthening well-being in our community," said Chief Councillor Doug Neasloss of the Kitsaoo/Xai'xais Nation in a news release.

"Spirit Bear Lodge ecotourism experiences are recognized around the world, Kitasoo Wild Seafoods exports sustainably harvested products internationally, and Spirit Bear Research Foundation supports a diversity of conservation science initiatives we’re undertaking. Our partnership with Coast Funds on these initiatives is an important part of our efforts to develop a conservation-based economy in the Great Bear Rainforest.”

In total, coastal First Nations have created 670 permanent new jobs in their rainforest communities, 500 of which are held by their own members. It's equivalent to nine per cent of the total working age population of Indigenous people in the Great Bear Rainforest, according to Brodie Guy, executive director of Coast Funds.

“Over the past eight years, we’ve seen an incredible diversity of new stewardship programs and sustainable businesses prosper across the coast," he said. "With over $100 million in funds under management, Coast Funds looks forward to the many exciting new initiatives that First Nations continue to spearhead throughout the Great Bear Rainforest."

Since the start of the Great Bear Rainforest conservation process, First Nations have finalized 18 protected area management plans for sensitive ecosystems and unique cultural sites. To ensure their long-term protection, they have also created and 14 Guardian Watchman programs to monitor commercial activities throughout the territories, which cover 20,000 square kilometres of space.