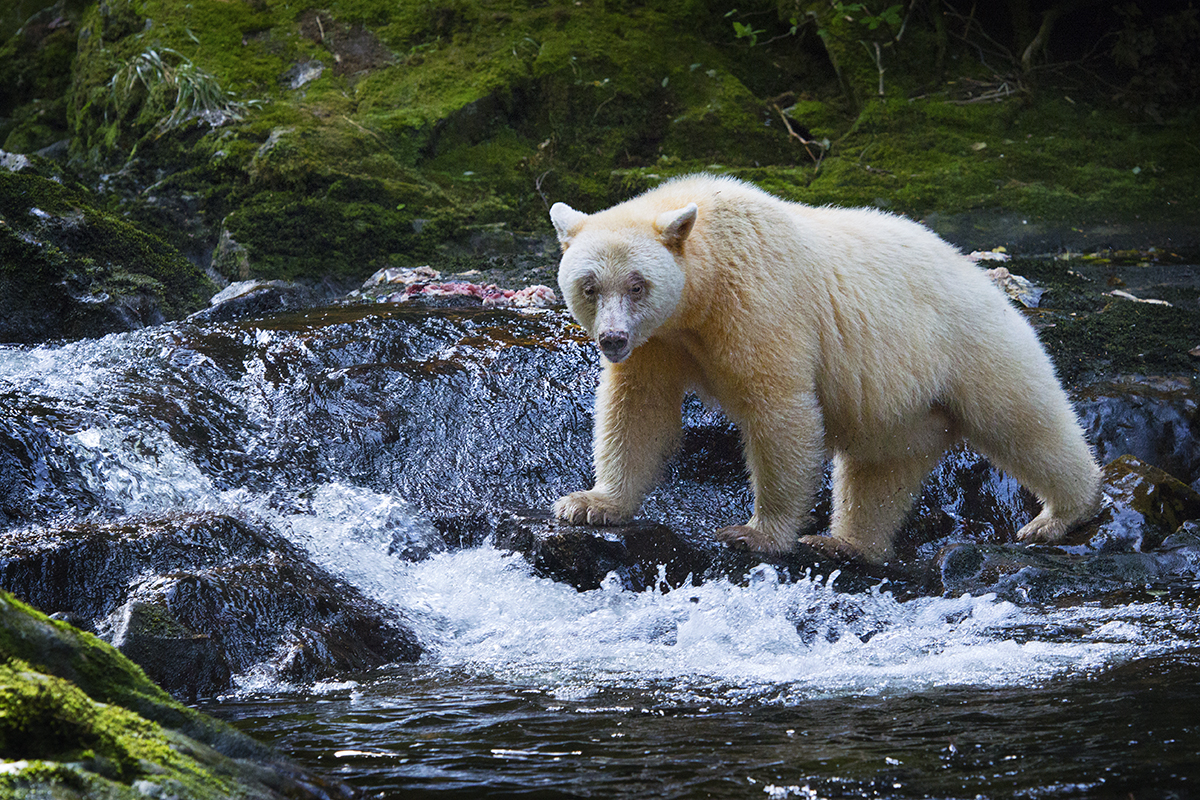 Photo of spirit bear by Sophie Wright
Next story

A deal to finalize the protection of the largest coastal temperate rainforest left on Earth is now complete. Covering a massive swath of Canada’s Pacific coast, the Great Bear Rainforest agreement will be one of the world’s most complex environmental victories and stands to be a global model for overcoming viciously intractable conflicts. National Observer is kicking off a special series delving into the importance of the Great Bear Rainforest, taking our readers behind the scenes to meet the people and communities who have spent two decades brokering this remarkable deal in stages.

The Great Bear Rainforest is famous for its towering fjords, ancient forests, First Nations communities, and of course, for those impossibly magical white Spirit Bears. But what struck most visitors on a recent National Observer expedition to the region was something entirely different: the silence.

We don’t usually think of silence having presence. But to sit in one of the great valleys of the Great Bear Rainforest is to be enveloped by a silence so powerful it shakes your very sense of self. It is a primordial silence you feel right into your bones; a silence that feels even more ancient than the gnarled cedars that have loomed in the mist through the rise and fall of so many civilizations and human empires.

Can silence truly have such impact? No one who has spent time among the moss-dripping giants and fog-draped inlets of the Great Bear Rainforest could be dismissive. Our National Observer expedition included battle-scarred journalists along with veterans of conflict zones and some the most hostile natural environments on the planet. They were brought to tears — literally weeping — not because of anything in particular, but simply because of the power of the place itself.

Small wonder that the people who live in such a place would have developed unique and amazing cultures. Think of the abstract art forms developed on the West Coast, art forms now so prized by collectors and galleries worldwide. The region is so vast, home to 27 distinct First Nations whose traditional and unceded territories make up what the outside world has come to know as the Great Bear Rainforest.

Centuries of colonization and disease have devastated the First Nations’ populations and cultures. Only very recently have we begun to speak plainly about the cultural genocide imposed on these communities. Yet despite this crushing history, and despite economic booms and busts wrought by the fishing industries, otter pelt trade and loggers, coastal First Nations are resurgent and have been in the driver’s seat of the negotiations that will be finalized.

The story behind the deal is as fascinating as the place is powerful. National Observer will bring it to you through the eyes of its participants: coastal First Nations, the international pulp and paper customers stigmatized by environmental boycotts, the loggers suddenly caught up in the “War in the Woods,” the environmentalists learning to respect and ultimately learn from their erstwhile enemies, politicians from across the political spectrum, philanthropists, lawyers, and many more. No screenwriter could have put together a cast as eccentric and colourful as the one you will meet over the coming weeks.

The deal has been two decades in the making — so long that some of its heroes are no longer with us. Some are in retirement, while others have survived personal crises and undergone wholesale life changes. The discussions and negotiations began almost a full generation ago.

Back in the mid-nineties, Greenpeace needed to introduce its temperate rainforest campaigns with the slogan, “Did you know Canada has rainforests?” It was a safe bet that very few did. Yet within a few years these rainforests would be on front pages not just across Canada but throughout Europe, the United States and Asia – wherever wood and paper products exported from the ancient forests ended up.

German publishers who had rarely given any thought to the environmental provenance of their paper stock were under siege by enormous inflatable Spirit Bears at shareholders’ meetings. Home Depot store managers were stammering to reporters that their company wasn’t responsible for clearcutting rainforests, they just sold cedar decking.

The Canadian forest products industry, experts in harvest volumes, board feet and pulp grades found themselves under international scrutiny and condemnation, floundering to explain brutal photographs depicting the wreckage of stumps where beautiful forests once housed marbled murrelets, wolves and grizzly bears.

Political leaders did not react well to accusations that Canada had become the “Brazil of the North.” Long accustomed to divvying up timber rights with the impunity of European colonial mapmakers, politicians fought publicly and travelled the global marketplace on behalf of the logging industry. At the nadir of this futile defensiveness, British Columbia’s NDP Premier, Glen Clark, would damn Canadian environmentalists as “enemies of B.C.”

The conflict and international attention came at the last possible moment. Temperate rainforests once fringed the mountainous Western coastlines of the globe. From New Zealand to Chile to Japan to Scotland, these forests of mossy giants have mostly gone the way of the legendary Cedars of Lebanon.

In North America, temperate rainforests lined the Pacific coast from the redwoods of California to frigid Alaska. But those same massive trees that generate awe among nature lovers also produce the highest valued timber in the world. Laid out on a map, North America’s western coastline was a green band that has been thoroughly fragmented and extirpated with two striking exceptions: the intact valleys of Clayoquot Sound and the massive green zone to their north known on maps until the mid-1990s only by its chillingly bureaucratese name, the “Mid-Coast Timber Supply Area.”

Twenty-one million acres, mostly unlogged. In truth it was an accident of history that this incredible region survived. It was so remote and inaccessible that the timber industry hadn’t focused on it in earnest until the easier stuff was logged off. By the 1990s however, First Nations were resurgent, the environmental movement was a force to be reckoned with and many among the general public were beginning to recognize the preciousness of what was left. Blockades had already been successful in places like Haida Gwaii and Meares Island and environmental groups were honing their ability to run international boycott campaigns.

The battle for Clayoquot Sound turned out to be something of a dress rehearsal for the fight to protect the Great Bear Rainforest; 1993 saw the largest civil disobedience in Canadian history as thousands blocked a logging road road access to Clayoquot, and nearly a thousand were arrested. International environmental groups launched 'market campaigns' targeting the logging companies’ wood and paper customers. Ultimately, First Nations, logging companies, governments and environmental groups hammered out a series of compromises to conserve the intact areas, make forestry sustainable and build greener economies for local residents.

The Great Bear Rainforest would be much more challenging. First Nations’ blockades and environmental market campaigns were successful in focusing attention on the region. But the Great Bear Rainforest is enormous and largely accessible only by sea. Twenty-seven different First Nations call the area home. Just getting your head around the science or economics was daunting. Those working to chisel out an agreement have had to work with all stripes of NDP, Liberal and Conservative governments during various tenures at the provincial and federal levels.

Sworn enemies would have to make common cause. Environmental groups would have to work with logging companies. First Nations with non-natives. Progressives with conservatives. Hunters with vegetarians.

The whole paradigm of forest protection would be reinvented. It no longer made sense to think in terms of parks versus clearcuts. Intact forests would be set aside, forestry practices reimagined, and a new sustainable economy would have to be designed and financed.

They succeeded, as did so many others tasked with challenges they would never have imagined themselves facing. It is an incredible story and one with global implications. As we will hear from conservation biologist Jody Holmes:

“You start looking globally and you realize if we can’t make this work here … how on Earth can we ask anyone else on the planet? If not here, where? We have to make it work here.”

This article is part of a series produced in partnership by National Observer, Tides Canada, Teck, and Vancity to highlight the stories, people, and history behind the Great Bear Rainforest conservation agreements. Tides Canada is supporting this partnership to foster integrated solutions for conservation and human well-being. National Observer has full editorial control and responsibility to ensure stories meet its editorial standards.